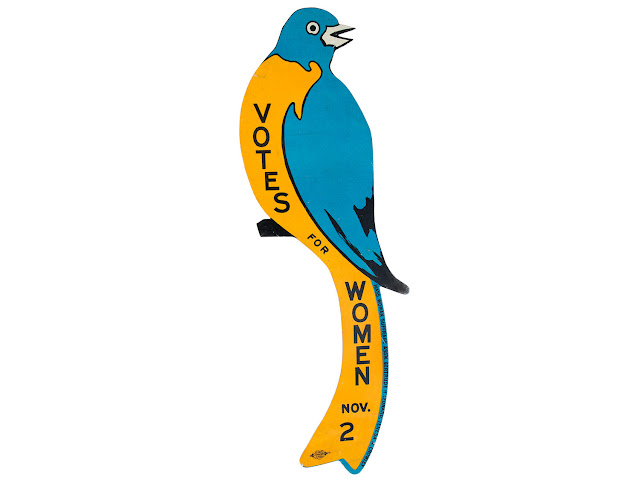 During our Suffrage and Animals post (here) I mentioned that the Bluebird signs were part of Massachusetts 1915 campaign.  One of the things that was integral to the suffrage campaigns in these states was that the women chose benign forms of propaganda so as not to offend the male voters in the autumn referendums.

On July 19, 1915, women posted 100,000 tin signs around the state to remind men to vote in favor of the women.  Considering all the photography that captures women's suffrage of the early 20th century, it's rather surprising that I couldn't find a photograph of the women posting the signs.  I did find this article and just as a note, sialis sialis is another name for a bluebird (still learning something new every day because of this blog).

The Massachusetts campaign is not one where I found a lot of information other than this sign.  That doesn't mean that they didn't have a strategy, I just haven't found a lot of studies on the suffragists' efforts.  One factor might have been that there were actually three different suffrage groups in the state:  the Massachusetts Woman's Suffrage Association (the oldest suffrage group), the College Equal Suffrage League (for college students and alumna), and the newest group formed in the early 20th century: the Boston Equal Suffrage Association for Good Government (BESAGG) which had become very active.

The BESAGG sponsored "Orange Day" and gave away oranges to folks in the hospital in March.  Throughout the year, they gained a lot of publicity for open air rallies that they sponsored in and around Boston.

Massachusetts was known to have the oldest suffrage group in the country yet it is surprising that the women did not choose more colonial themes for their campaign.  Is anyone else curious why they didn't sell something like Equality Tea (as a nod to the Boston Tea Party)? 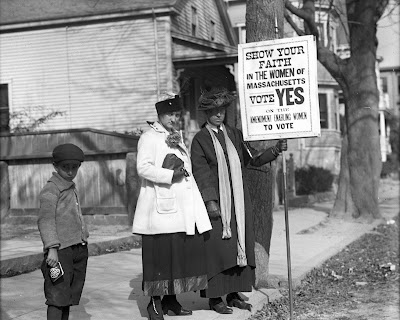 Have a good day and stay well!