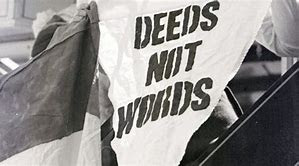 "Deeds Not Words" was the rallying cry of British Suffragettes as they fought for the vote.  It is my favorite slogan of suffrage and one that I think would be useful even today.  Imagine how some young people's lives would be different if they had been taught by their parents to perceive the people they dated by their actions and not by their rhetoric.

Today our planet is under siege in a way that has never occurred in modern history.  It is with pride that I can point out that our people--mostly sewists who read this--our expressing their compassion, support, and patriotism by making masks and surgical hats for the medical community.  Already on March 25, the New York Times ran an article called "A Sewing Army. Making Masks for America".  You can read it here.

We do this not for praise but out of compassion and willingness to be useful at this time. My father used to say if you can't change something, let it go; but if you can change something than do something about it.  Maybe you aren't making masks but checking on elderly or donating to your food bank or doing something as simple as STAYING IN.  However, many folks in our community are doing what they can to help each other.  I'm sure that is happening where you live as  well.

As an historian, I do wonder if future history books will have a blurb about the help that sewing folk gave during this time or if it will be relegated to be forgotten like so much of women's history.  I suppose that will be the real determining factor of how far women have come in society.

Women have always stepped up to assist as I pointed out in my Women of Courage posts.  We stepped up during the Civil War raising money and providing goods that would be in today's market, billions of dollars.

And that brings us to our next segment of women's history and suffrage.  Here's a clue: 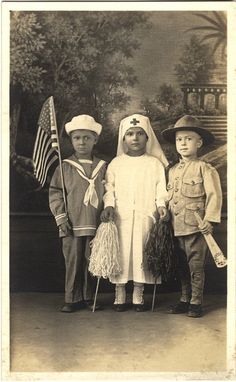 If you guessed World War I, you would be correct.  If you also guessed that I am obsessed with all the photos of children dressed as soldiers and nurses from this time period you would also be correct. 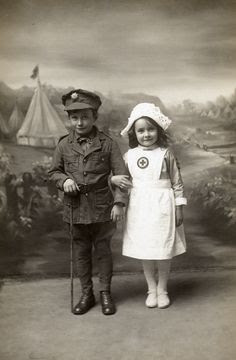 I'll be back on Monday with the first installment about women during World War 1.

Posted by Michele McLaughlin at 5:10 AM

Email ThisBlogThis!Share to TwitterShare to FacebookShare to Pinterest
Labels: deeds not words