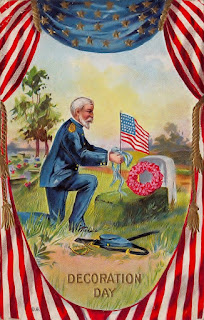 This weekend we honor those who have made the ultimate sacrifice to insure our freedom and way of life.  This holiday originated after the Civil War and was originally referred to as "Decoration Day." 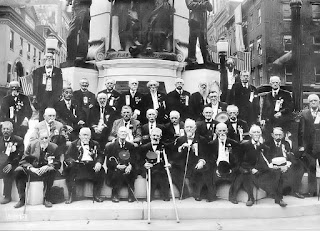 Members of the First Defenders, the Civil War Allen Infantry under Captain Thomas Yeager gather at the Soldiers and Sailor's Monument in Allentown's Center Square on Decoration Day (Memorial Day), 1911.

I began reading about the Soldiers and Sailor's Monument while researching our Civil War program called "Money, Myth, and Madder."  I was deeply touched when I read that the grave of a Confederate soldier buried in Allentown's Fairview Cemetery was also decorated by the GAR.

Further investigation revealed that the Confederate veteran had not died in war.  He was Stephen Albion Repass (1838-1906), a confederate soldier wounded and imprisoned as a POW during the Civil War.   After the war, he became a Lutheran minister.  In 1885 he was assigned to St. John's Lutheran Church here in Allentown.

At a time when our country is so divisive, we could learn a lot from Rev. Repass and our local GAR forefathers.  When the Reverend's death was reported in The Allentown Leader on June 2, 1906, the newspaper reported that "when he arrived here, he was somewhat sensitive about public sentiment in regard to him having been a southern soldier." And goes on to state:

Some years ago he delivered the Memorial Day address at Hazleton. His audience, especially the G. A. R. veterans, were immeasurably pleased with his speech. At the close of his address he said: "Now, soldiers and patriots, I hope you will  think none the less of me when I tell you I fought on the other side." The old soldiers broke out in applause and crowded around Dr. Repass to assure him of their good will. "We admire and respect you for your bravery. If we had been born and reared where you were, it is probable many of us would have been in the Confederate army, too. We know you are a patriot, and as such we welcome you to Allentown."


When the Soldiers and Sailors Monument was dedicated in 1899, it was Reverend Repass who was chosen to do the blessing at the ceremony.  Our monument here in Allentown includes figures of both a Union and Confederate soldier with an inscription underneath:  One Flag-One Country.  Excluding Gettysburg, it is the only monument north of the Mason-Dixon Line that honor soldiers from both sides of the Civil War.

Local historians have often suggested that the inclusion of the Confederate Soldier was in large part due to the respect that our valley had for Reverend Repass.  Although I haven't found any document to confirm this yet, it is undeniable that the man changed people's perceptions here. In 1909, The Pennsylvania German magazine wrote extensively about Repass:

"The Rev. Dr. S. A. Repass did more, wherever he was known, to restore fraternal feelings between Northern and Southern people, and especially among the old soldiers of both sides than any other known to the writer."

In my own lifetime,  Memorial Day has changed enormously.  When I was a child, our entire village of Fullerton celebrated the veterans who had died in war.  We participated in a parade, visited the local graveyard for prayers and speeches, afterwards we congregated at the local American Legion for punch and cookies.  As we went home, my father told us about the one or two Civil War veterans he had seen during the Memorial Days of his childhood.

In the 1980s, I took my son to the same event in what has become Whitehall Township.  There was no parade, only a brief ceremony at the cemetery.  The handful of World War 2 and Vietnam veterans who attended always thanked me for bringing my young son to the memorial.  I wasn’t driven by some nostalgic yearning.  Most of the things I insisted Peter do with me had a similar theme:  I wanted him to understand and experience that he was part of something bigger.  On Memorial Day, we owed a debt of gratitude and acknowledgement for sacrifices that had been made and especially for those who had made the ultimate sacrifice.

On this holiday, I am always looking at textiles I collected from the years surrounding World War 1.  "Remember me" is imprinted on so many things. 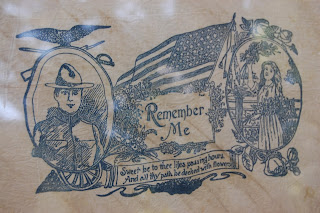 A World War 1 handkerchief that a soldier might have left with his sweetheart before embarking overseas.  Below:  a woman's apron with a 5 inch long border. 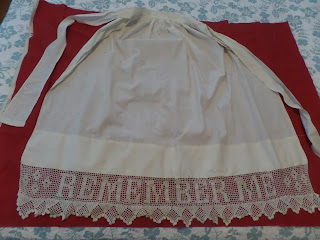 Remembrance on this particular holiday is in itself, an action of gratitude.   When we come together to celebrate this holiday with honor and prayer, we learn that differences in opinion and experiences can be bridged, reconciled like Rev. Repass and the GAR.

We are bound together:  one flag, one country. 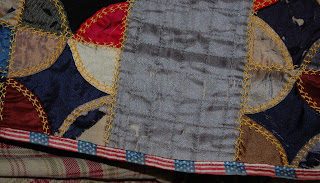 Have a safe and happy holiday.

Posted by Michele McLaughlin at 8:44 AM No comments:

My rhododendrons always bloom in time for Memorial Day weekend. 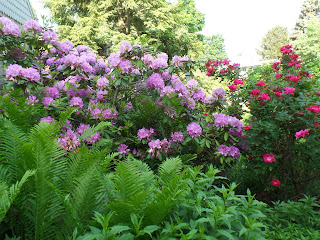 We are fond of our "rhodies" because they thrive in our acidic soil and give such a wonderful show this time of year.  Up north in the Jim Thorpe area, the hills are full of wild rhododendrons in all sorts of colors.  So when I found this quilt top featuring our lovely bush, I just had to have it: 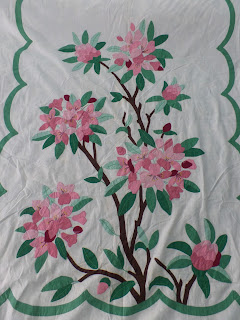 "The Rhododendron Quilt" was a kit quilt from the Progress Company.  According to Rosie Werner's quilt kit website, The top was featured in the 1952-53 Herrschner's Catalog. 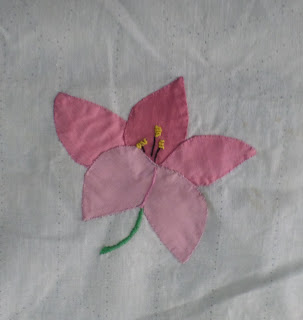 The center motif is surrounded by flower blooms and there is a nice cluster of rhodies at each corner of the quilt top: 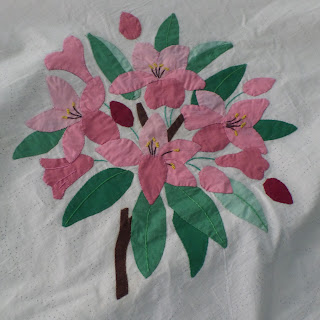 I've read that the symbolism ascribed to the rhododendron is caution or to beware because of the toxicity of the plant.  From a literary point of view, Daphne du Maurier's book, Rebecca, (which both thrilled and terrified me as a youngster) featured the bush, perhaps in a way that foreshadowed the evil character of Rebecca.  The original Mrs. de Winter was said to have cultivated red rhododendrons and white azaleas (azaleas are toxic too).  My rhodies are all pink and purple (the red you see in the above photo are my roses).

It's hot and humid in Pennsylvania this weekend so stay cool and hydrated.

Guests also may visit the Doric House Museum, 114 Main Street in Flemington to view more quilts in the historic rooms after the program.
$25 per person; Society members $20
Beginning April 1, register on-line at hunterdonhistory.org or phone 908.782.1091
Posted by Michele McLaughlin at 6:15 AM No comments:

Email ThisBlogThis!Share to TwitterShare to FacebookShare to Pinterest
Labels: Shows

Happy Mother's Day to all!
One of my favorite pieces of redwork celebrates the birth of baby on the summer spread. 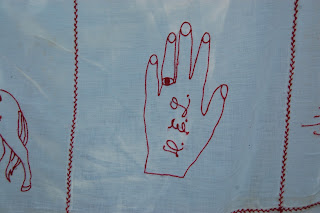 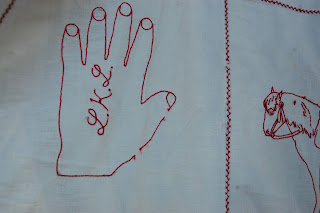 And the wee babe's hand with the birthdate: 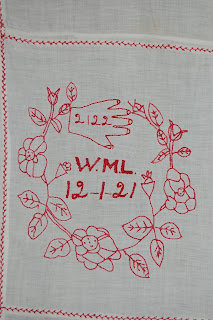 Have a wonderful and safe holiday!
Posted by Michele McLaughlin at 6:46 AM No comments: April Showers DO bring May flowers!  Our garden is loving the last few days of rain!
It seemed like a perfect time to talk about the Flower Garden Quilt.   I believe this was published in the late 20s-early 30s and it was a very popular pattern.  You can google this pattern and find a variety of versions.  Mine does not have the picket fence: 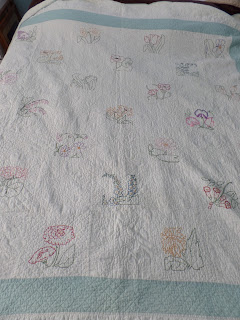 I chose this particular quilt because the soothing blue/green border reflects the serenity I feel in my garden. 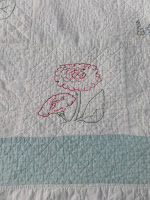 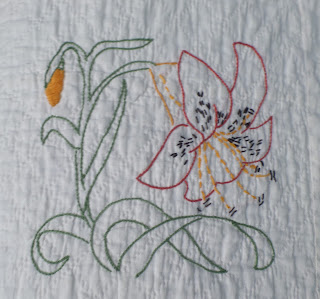 This quilt pattern has a timeless quality about it.  I hope you are enjoying a pleasant Spring season and taking some moments to enjoy the glory of the season!

Posted by Michele McLaughlin at 7:19 AM No comments: