Pennsylvanians rarely agree on anything politically but there are a few things we all love:  quilts, cheese steaks, soft pretzels and yes, we love the Liberty Bell.  Here in the Lehigh Valley we even have a deeper attachment: the bell was hidden in the basement of a church here during the revolutionary war. 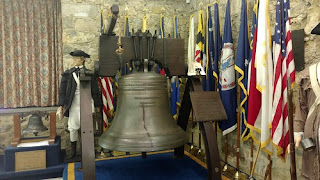 In 1914, Katherine Wentworth Ruschenberger of Philadelphia commissioned a replica of the Liberty Bell to present to the Pennsylvania Woman Suffrage Association (PWSA).  Called "The Justice Bell" it was smaller than the Liberty Bell, made of bronze, did not have a crack, and had the words "ESTABLISH JUSTICE" insribed on the bell.  Most of the press in Pennsylvania and other states hailed the new bell; a ceremony at the foundry where it was cast was held in Troy, NY and was even covered by the "moving pictures" for press footage.

The completion of the bell was fortuitous and just in time for the 1915 campaign.  It weighed 2,000 lbs. and a special cart had to be built to endure the weight.  Throughout the year, the bell was taken to all 67 counties in the state. 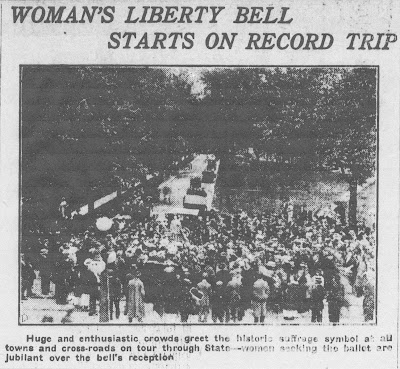 The bell was met ceremoniously everwhere it went and provided the suffragists with a steady stream of publicity.  It was here in the Allentown area in August of 1915 and featured prominent speakers everywhere it was taken. 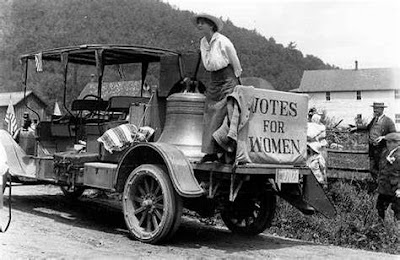 The bell would not be rung until women had achieved full suffrage.  In September of 1920, after the 19th amendment had been ratified, there was a huge ceremony for the ringing of the bell.  Nearly a hundred women and girls participated in the  pageant.  At 4 p.m. on September 25, the bell was rung at Independence Hall.  Throughout the state of Pennsylvania bells were rung in nearly every county simultaneously announcing a new era for women. 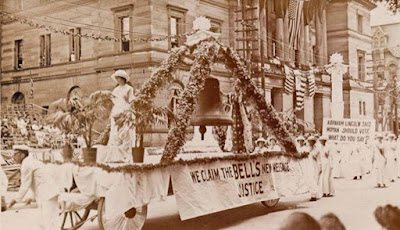 The Justice Bell still exists and is housed in the Valley Forge Chapel.  This year a replica of the bell was made to travel throughout the state.  Unfortunately with the pandemic, this will most likely be cancelled as well as most other suffrage ceremonies.

But wait, there is something we can do this year.  Tomorrow I will tell you about another strategy that Pennsylvania suffragists initiated in 1915.  And I will encourage you to do your part--it's easy and safe--to honor our foremothers and their struggle to insure our full rights of citizenship.

Posted by Michele McLaughlin at 5:02 AM