The Suffrage Torch of New York 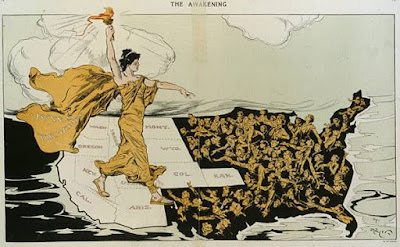 Suffragists from New York state had a symbol of their struggle which they used during the 1915 campaign.  The Suffrage Torch of Liberty went well with the theme of the Statue of Liberty and it was literally carried throughout the state.

The torch was a magnificent piece of carved wood it and was taken through every county of New York during the summer of 1915 and crowds gathered close to the speakers to get a look at the torch.  Each town and city had special ceremonies and speakers promoting the cause of women's right to vote.  Harriet Stanton Blatch herself often participated as a speaker; she was the daughter of suffrage founder, Elizabeth Cady Stanton.

Another speaker, famed art collector Louisine Havemeyer, stated that the torch "was like the one in our harbor, it stood for liberty and freedom--the freedom we are seeking."

Havemeyer herself loaned her art collection to a gallery to raise funds for the cause that year.

In May, a suffrage baseball game was held between the Giants and the Cubs that benefited the suffrage organizations.  Suffrage propaganda was given  out at the game and even the score cards requested that the men "give women their turn at the bat."

Various special days were held to illustrate that women should have the vote:  A Grandmother's Day, A Beautiful Baby contest, and even a Happily Married Day to show that men could be content partnered with a suffragist.

By far, the most popular campaign in New York was the Suffrage Torch.  I've never been able to find what happened to the torch but tomorrow, we will learn more about some of the adventures of the mighty torch.

Have a great day and stay well!

Posted by Michele McLaughlin at 8:07 AM