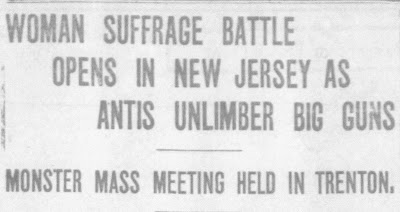 1915 was an exciting year in New Jersey for suffragists.  Much of their strategy centered around rallies which were held around the state. 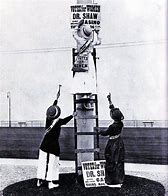 Women post signs for rally with Dr. Anna Shaw as the key speaker.

The women in New Jersey also adopted some measures found in other states; I will discuss their response to one Pennsylvania strategy in the days to come.

Additionally, New York suffragists decided to share The Suffrage Torch and allow it to raise awareness in New Jersey and Pennsylvania.  in August, a special ceremony was scheduled for the NY to NJ hand-off --by boat--in the middle of the Hudson River.

The press and even "moving cameras" were present.  Boats were decorated and officials from New Jersey also attended.  The New York tug called "Holbrook" chugged across the waters towards the New Jersey dock and waited to be met by the Jersey tug, "The A. W. Smith".  And then the New York women waited and waited.  The New Jersey tugboat did not even leave the dock and as the New Yorkers waited a good 30 minutes, it was learned that the NJ tug had not applied for the proper permit.  Fortunately, a suffrage supporter managed to smooth things out with the steamboat inspectors so that the ceremony could--eventually--go on. 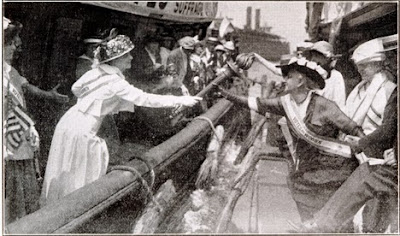 Local newspapers reported this episode as part of the "Jersey Jinx."  A number of vexing problems had been encountered by New Jersey suffragists.  Not the least of this was a major problem in February, when misplaced commas nearly killed legislation.

This is true, one comma that was misplaced in the paperwork that went from the state house to the state senate almost killed the bill.  The legislation had to be returned to the assembly, re-voted and sent to the senate again.  Newspapers speculated that it seemed that the suffragists were "hoodooed" (great word, means bewitched or bring bad luck).

If this is all that happened, this would be a nice blog post about a tribute to The Statue of Liberty and a nice torch was made and passed around.  But it isn't... 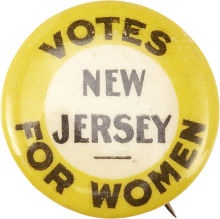 A week after the New Jersey suffragists had taken charge of The Torch, it was stolen from an automobile.  Harriet Stanton Blatch was mad as heck stating:  "Mrs Havemeyer and I guarded the torch in New York and never let it out of our sight.  We even took it to bed with us."  Speculation ensued suggesting the Antis had stolen the torch and a reward of $80 was offered.  A few days later the torch was found by a Wall Street lawyer in a Philadelphia trolley car and returned to the suffragists.  The lawyer declined the reward and the ladies made him an honorary member of the Women's Political Union. 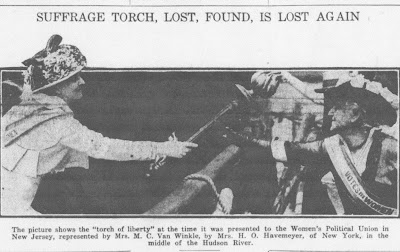 The torch had been lost again. 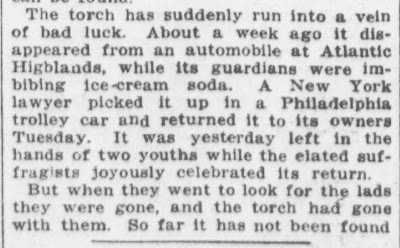 A $25 reward was offered for the return of The Torch.

How or where it was retrieved is unknown but it did end up being given from NJ to Easton PA on September 2.  The trail of Torch ends here.  It does not appear to have toured Pennsylvania beyond Easton.  I can't find any more information about the torch--whether it still exists or not or if it's in the collection of a museum.   If you know it still exists, please let me know.

Have a good day and stay safe!


Posted by Michele McLaughlin at 6:39 AM

Email ThisBlogThis!Share to TwitterShare to FacebookShare to Pinterest
Labels: Suffrage Torch in NJ