These days, states on the east and west coast are banding together to fight the pandemic epidemic.  In 1915, women from four states bonded together for full suffrage.  The "four sisters" as they were often called that year were Pennsylvania, Massachusetts, New York, and New Jersey.  Newspapers anticipated a change in the status of women: 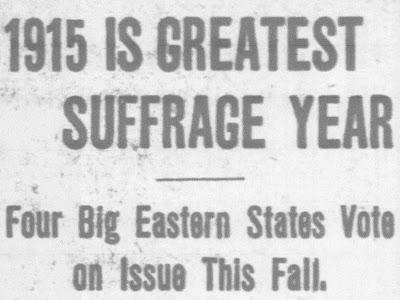 Suffragists speculated that if these states granted women the right to vote that other non-suffrage states would surely follow: 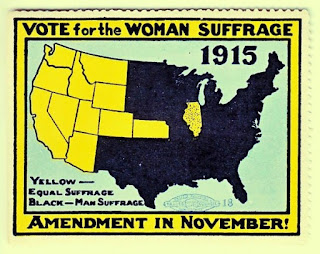 It was the height of the Progressive Era.  Women had spent much of the new century focused on civic and community improvement.  Organizations had been formed to improve sanitation and hygiene; the women fought for "clean water" and "pure food" for their families.  Preeminent was their focus on children.  As women organized playgrounds, kindergartens, and organized child welfare conferences, friendships were established in different regions that helped improve strategies for progress. 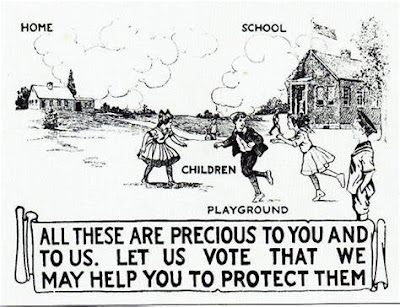 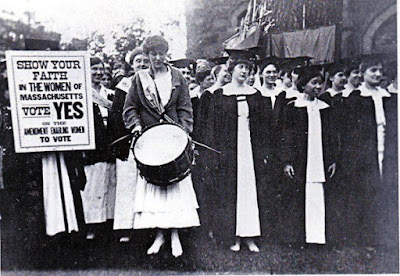 There was also a mood in the United States that suffrage was inevitable.  The atmosphere would not make the women's fight any easier.  All four states had a suffrage amendment that passed through their state houses and senates; all that was needed was for (male) voters to agree and vote "yes" in a referendum scheduled in the fall.

Some of the greatest marketing strategies in support of suffrage were launched during this year.  Women in these states were on a mission; women in non-suffrage states watched to see which strategies might be successful.

It was my favorite year in suffrage history.  I hope it will be yours as well.

Stay well, stay tuned, and have a great day!

Posted by Michele McLaughlin at 3:27 AM

Email ThisBlogThis!Share to TwitterShare to FacebookShare to Pinterest
Labels: 1915 is the Greatest Year