There aren't many things for my collection that I buy anymore.  But the one thing I can't seem to resist...are antique button bags.  I posted about them a few years ago but I've added a few to my collection and done some research as well.

Most of us grew up with a tin of buttons that our mothers/grandmothers/etc. kept.  I know of many people who found the button tin fascinating as a child.  In the 19th century and early 20th century, extra buttons were kept in handmade bags.  Often they were embroidered with the word "buttons" on them.  In 1898, Lady's Godey's Book (magazine) provided instructions to make this simple drawstring bag: 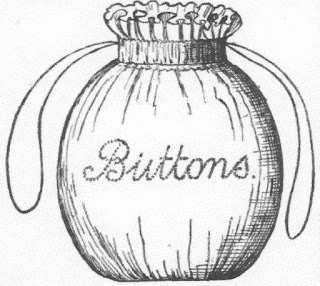 By the end of the 19th century, the button bag was adorned more and began to relay a sense of playfulness.  This bag appeared in an 1889 article in The Ladies Home Journal as a Christmas gift idea: 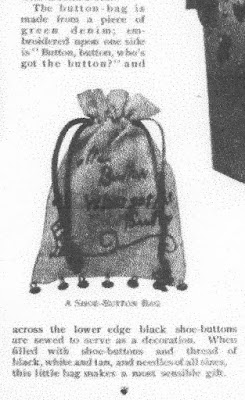 This bag is embroidered with the phrase--and children's game, "Button, Button, Who's got the Button?" and even has little tassles at the bottom of the bag.
Button games were popular with children and encouraged periodically in women's magazines and newspaper articles.  But the advent of the 20th century introduced a more whimsical approach to women's work bags (and other sewing).  I think it is the sense of humor of this era that I enjoy. 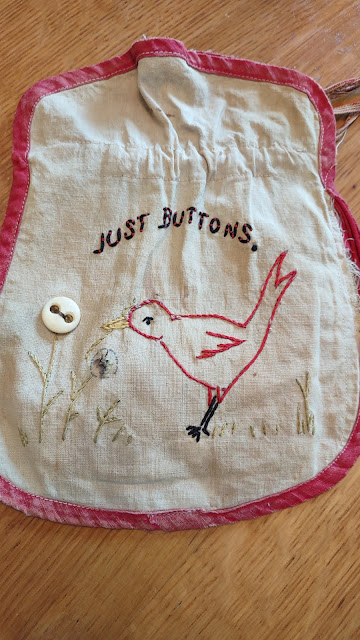 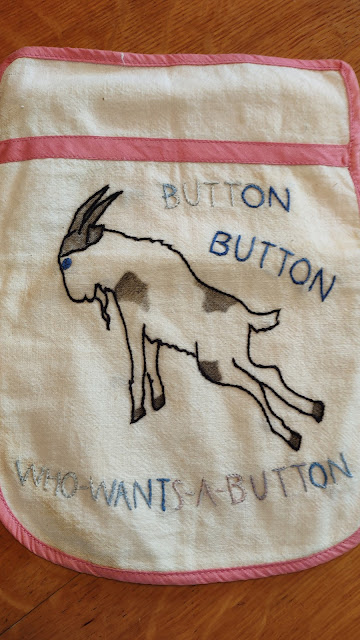 Enter, the button family.  One of the reasons I wanted to research this was because so many vendors market early Button Family bags as a product from the 1930s; this always seemed wrong to me and my research proved me right.
What, you may ask, do I mean by the Button Family?  Well it began in the 19th century with a suggestion of cutting images of people and substituting the faces with a button; the child could paint a face on the button and make a different kind of paper doll.
I'm not sure where the later family originated but one 1911 article attributed it to an 8 year old boy who pasted buttons on his renderings of people: 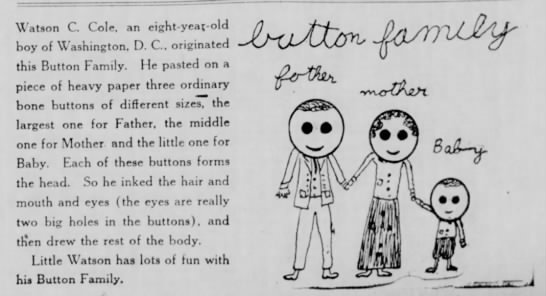 Whoever invented the button family, it became a true fad in the early decades of the 1900s.  The Button Family was featured most prominently in stories for children like this story published in Youth Companion magazine in 1911: 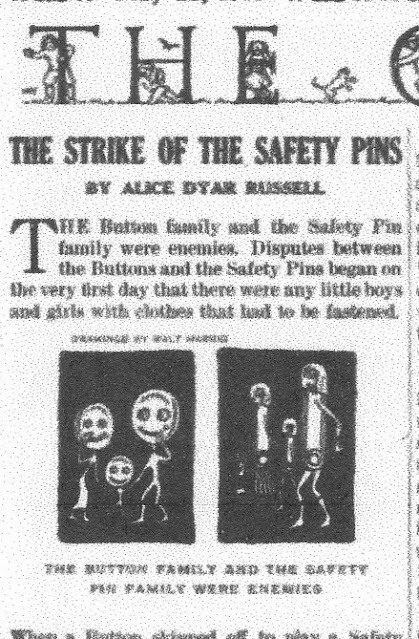 There were fairy tales published in the newspaper and magazines and the allure didn't stop as a quick fad.  The Button Family's popularity extended into the the next few decades.  Here is an illustration of a Button Family story supporting the Red Cross in 1919: 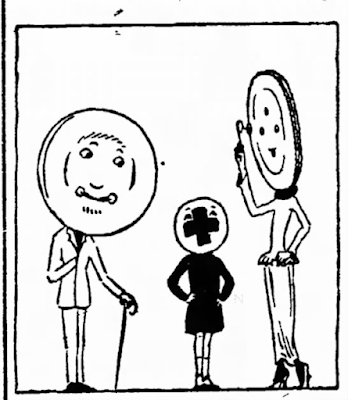 The Button Family was a craft that children could make: 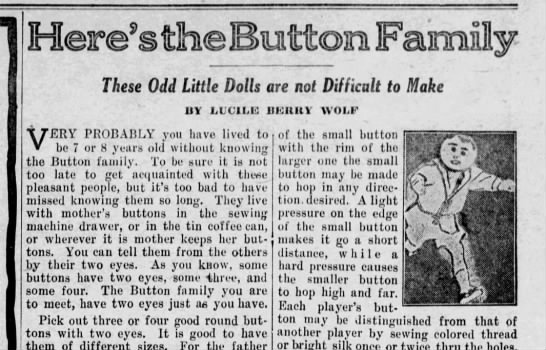 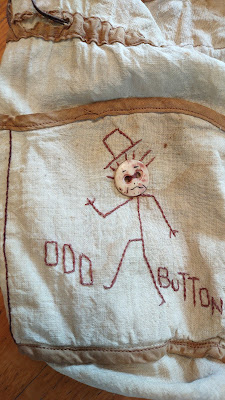 An early Button Family bag.  The character resembles the stick figures often depicted in stories.  Note the paint on the faces.  The bag features the words, "Odd Buttons" and different compartments that were embroidered. 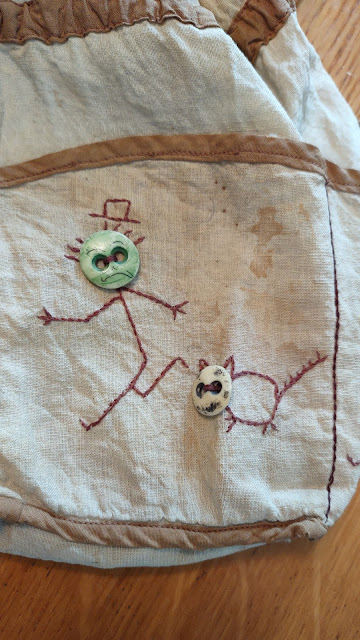 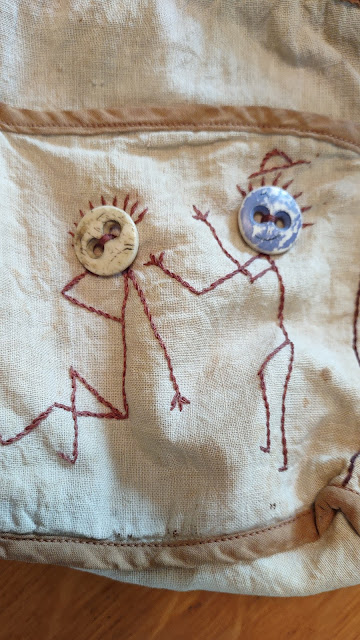 Pre-stamped kits (like the bag above) were sold at many stores and often featured the family.  The maker would embroider the motifs and assemble the bag.  They usually sold for 25 cents.  This was an ad in a Nebraska newspaper in 1911: 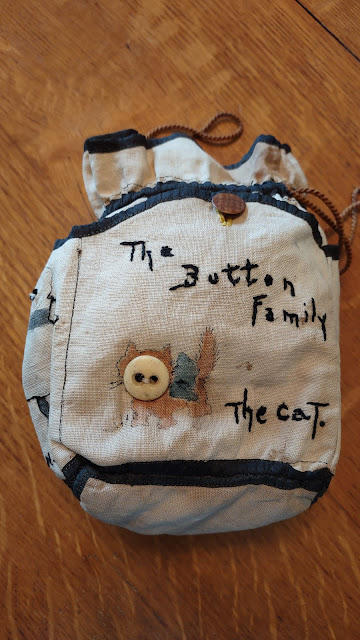 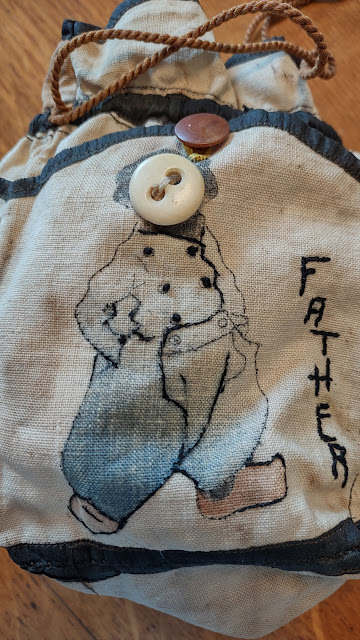 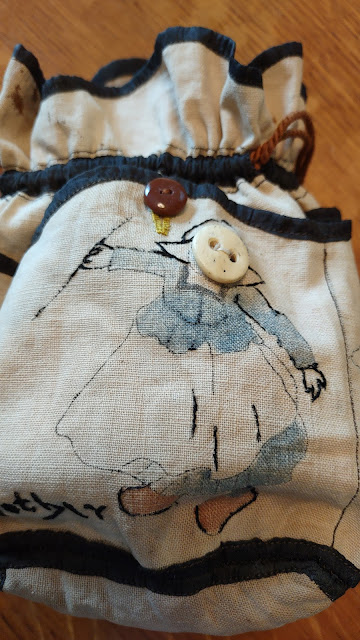 The Mother, always welding a stick. 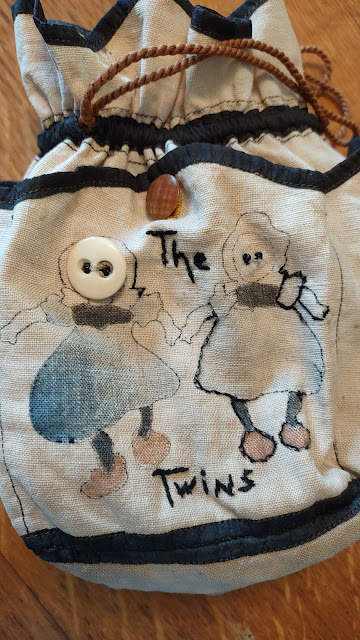 These figures feature wooden shoes and the woman with the stick is reminiscent of Old Dutch Cleanser illustrations: 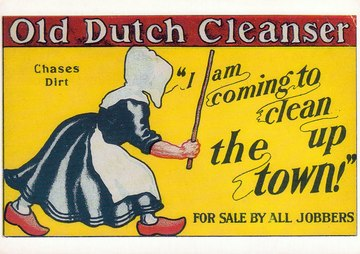 But there were more motifs.  I particularly like this one from my collection: 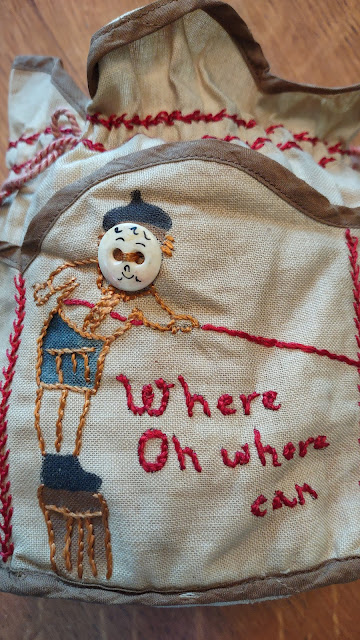 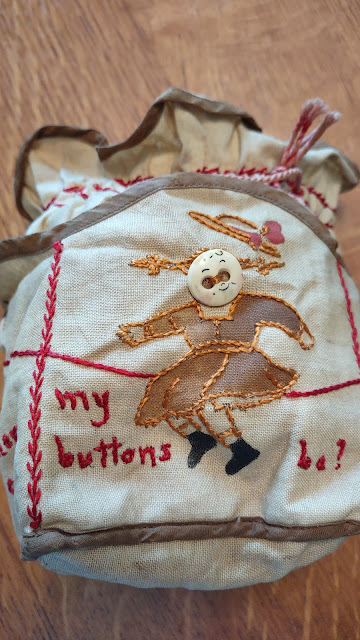 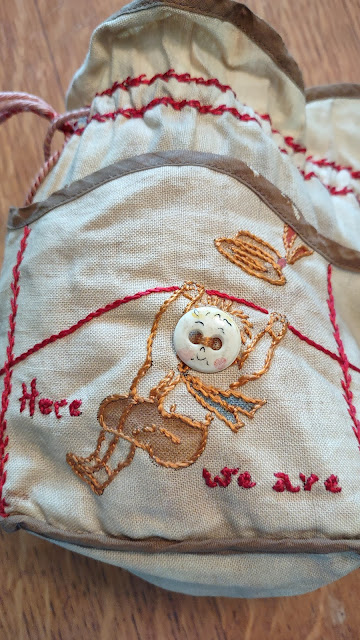 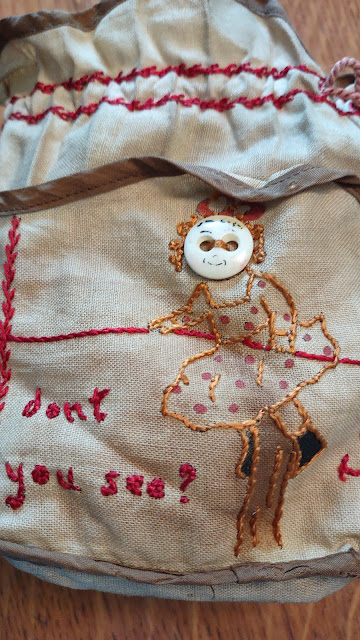 But the Button Family extended beyond textiles.  There are TONS of postcards that were made featuring different button characters...and always with a sense of humor.  These are all from Pinterest: 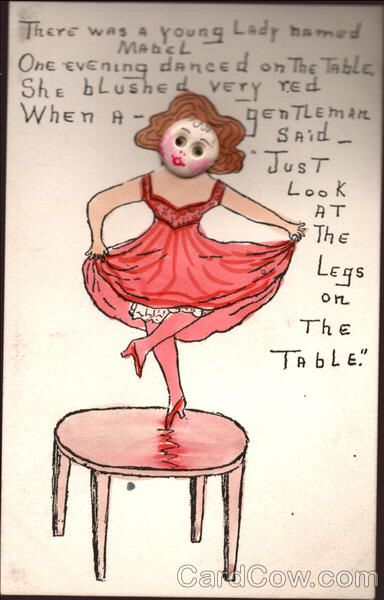 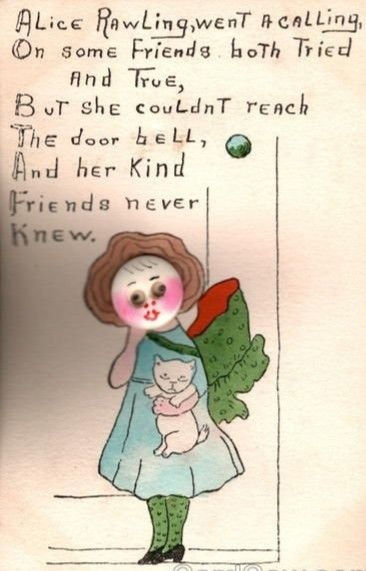 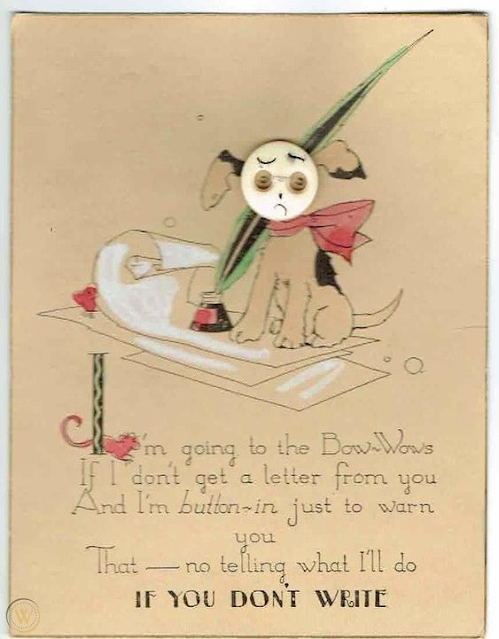 Not surprising, the Button Family was used to market...buttons! 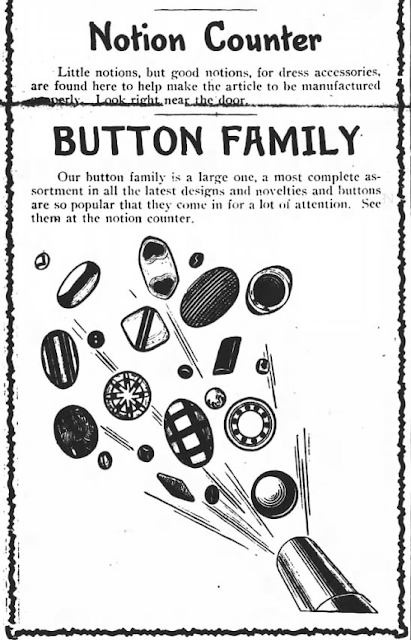 And also not surprising, by 1912, 'the button craze' had hit fashion...even lace stockings:  "Lace stockings are punctuated with half-dozen ninon covered buttons..."
By the 1920s, the button bag continued to be sold as kits but no longer were marketed as the Button Family.  I do however, think that these may have been descendants from the good Button Family.  From 1923: 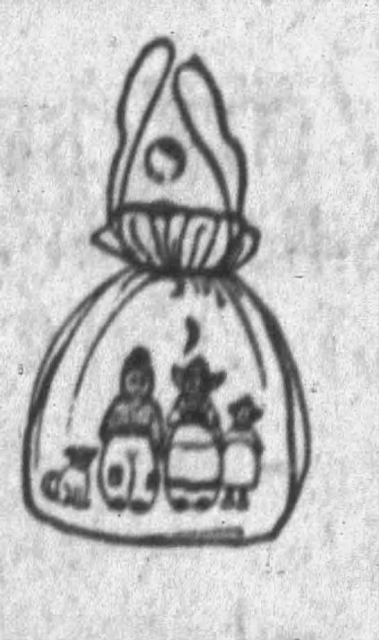 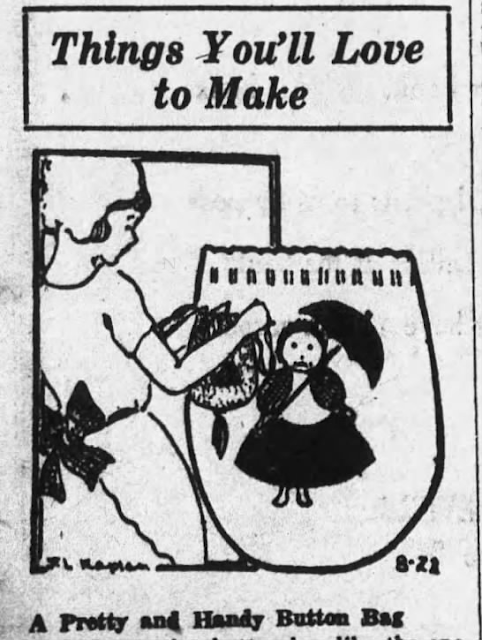 One last note:  Button Family bags are rarely in good condition.  The bags and their contents were used and loved and played with and show the wear.  I would be suspect of any bag in pristine condition that you should encounter.  A few years ago, Amy Barickman published a pattern for the bags.  You can still purchase old copies of the pattern at Ebay at times if you wish to make one for a child in your family! 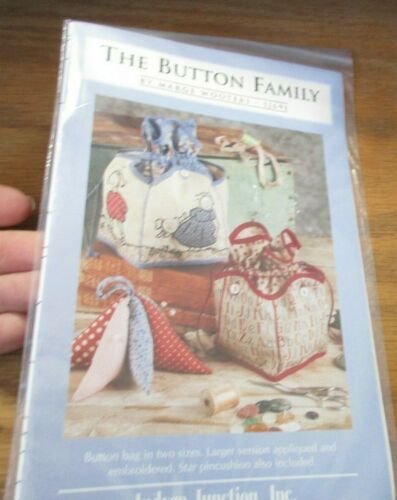 I hope you enjoyed today's post about the Button Family!
Have a safe and happy day! 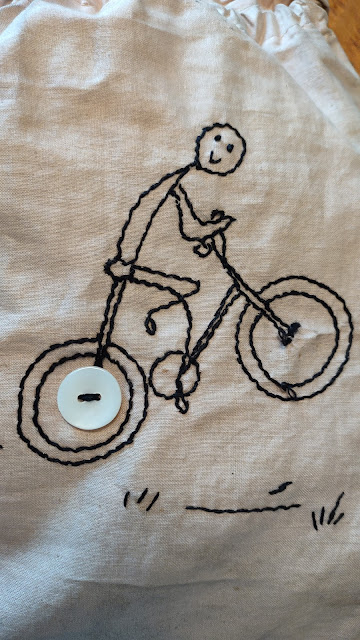 Email ThisBlogThis!Share to TwitterShare to FacebookShare to Pinterest
Labels: The Button Family