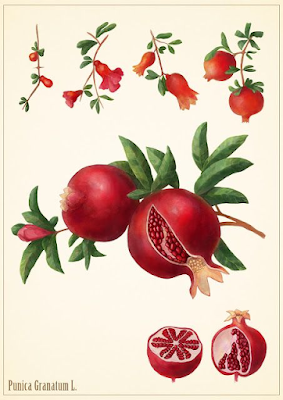 Pomegranate, it's an ancient fruit that has become one of the "in" fruits this past decade.  My husband likes the juice on occasion.  I'm not crazy about it but I think it is fruit that is pleasing to look at; apparently so did our foremothers.
Pomegranates are another common fruit that our foremothers like to capture on their red and green quilts of the 19th century.  Often, we can distinguish the difference between the pomegranate pattern and the love apple fruit by the jagged edge along the end of the fruit (technical term=persistent calyx).  Ruby McKim made note of this on her 20th century rendering of the fruit: 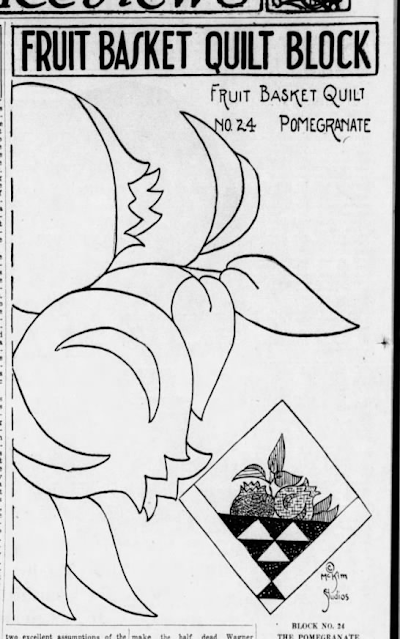 But there are many motifs that don't have that jagged edge.  Those patterns look an awful lot like the love apple and I wanted to point that out to you.  Here's a 1934 version rendering of a 19th century pattern: 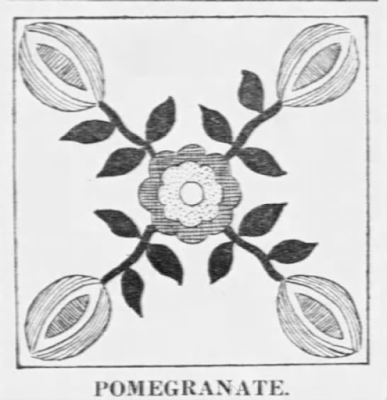 This version is very similar to a 19th century version of a Ladies Art Company pattern called "Peony and Pomegranate"; the Peony is in the center.
In general, patterns can be deceiving in their appearance.  There's another pattern that has a fruit with one edge jagged called "Pumpkin Seed"--I couldn't find a photo of the pattern but it's a wreath with what appears like fruit (with jagged edges) surrounding a wreath.
We often want to be able to glance at a pattern and know it's name--and often we do.  But applique patterns can be tricky.  If you are interested in this kind of study, I suggest you buy Barbara Brackman's Encyclopedia of Applique Quilt Patterns.
Appraisers use Brackman's resources for this very reason.  I've had quilts appraised that the appraiser has said, "I need to research this pattern more" before telling me the name.
If all that isn't confusing enough, there is the word variation of used by appraisers.  Sometimes Great-grandma made her own version of a quilt pattern she had seen and her rendering doesn't quite match the documented patterns we study.
Do you like red and green quilts?  I have some friends that are just crazy about them and the quilts usually expensive because of the demand.  Do you have any you would like to share with us? 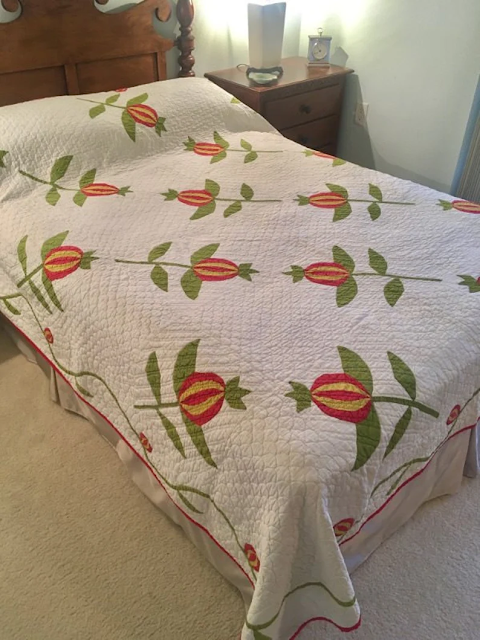 On sale at Etsy right now is this 19th century "pomegranate quilt."
Have a safe and happy day!