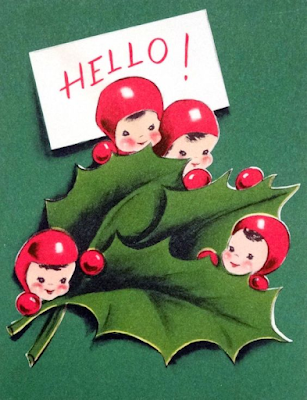 Happy Friendship Friday!
December and January are considered the coldest months in the United States.  January in particular holds the record for being the coldest month here in Pennsylvania and also in our friends up north in Canada.
Red is a color that is often connotated with warmth and so it is nice to see a touch of red--even in the garden like my neighbor's holly berries which I can see even from faraway: 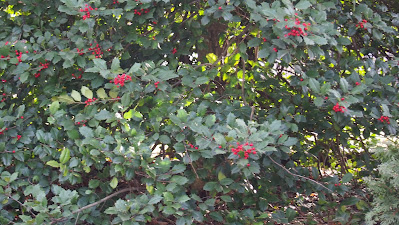 Another red plant is the red twigged dogwood in my front yard.  The bush has variegated leaves in the summer but I love the red bark of the bush this dreary time of year. 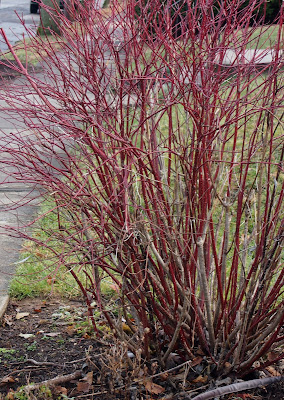 It's fairly warm this week in Northeast Pennsylvania but I'm thinking of our many friends who have snow right now and colder temps (hello Diann and Jocelyn).
*** 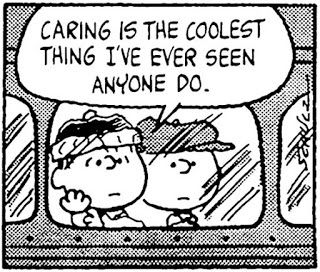 Some caring good news:  We all know that the Buffalo area of NY suffered terribly during the holiday storm.  Kudos to the young couple who saved dozens of sea gulls trapped in the ice shores of Lake Erie.  Read the story here.
Then there is the tale of "Thor" an arctic walrus that swam up to the shore of Hampshire (as in the United Kingdom).  The nice Brits stopped to see the animal resting but didn't bother him as he rested on the shore.  The incredible news?  The local county council cancelled the fireworks so that the walrus would not be upset by the noise and the lights.  Read the story here.
Wishing you a safe and happy weekend!

Posted by Michele McLaughlin at 4:36 AM