My friend Carol used to call me "the quilt whisperer".  She certainly didn't call me that because I was a great quilter--in fact one of my favorite t-shirts is one she gave me that said "most mediocre quilter in the world"...and she was right!

Carol called me that because I had a weird sense of finding quilts; she had seen this first hand while attending flea markets, auctions, and estate sales with me.

We attended one local auction years ago.  There wasn't much that I wanted (Carol always found funky treasures) until we went to the outdoor lot section.  If you've never attended an auction, the good stuff is always in the building and the lesser quality items are outside and sell first--usually for a very low price.

I didn't find anything I like indoors and wandered around the outdoor section, occasionally checking boxes and bags.  One bag seemed to have old household items in it and then I spied a plastic bag of Lancaster Blue fabric.

Our friend Beth was still doing quilt restoration and I thought it would be nice to purchase the double blue fabric for her.  If you don't know what Lancaster Blue fabric is--it is a double blue print that was printed and popular in the later half of the 19th century.  It was very popular with various Pennsylvania Dutch quilters.  This is the closest fabric photo I could find of it.

Another woman at the auction told me she was a quilter and apparently she spied the fabric too.  We ended up in a bidding war for the silly bag.  I won the bag at $7.

I would like to tell you that I was excited about my purchase but to be honest, I forgot about it until after we got home.  Carol finally said, "Let's see Beth's fabric!"

So I pulled the things junk out of the bag and then grabbed the fabric. 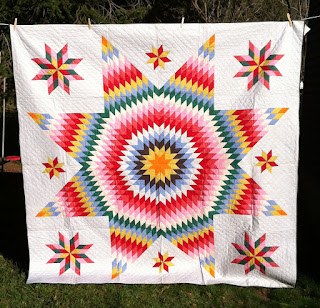 Except it wasn't fabric. 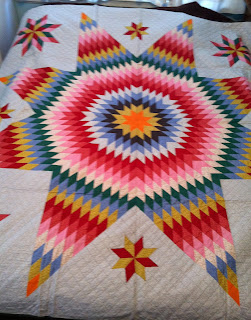 It wasn't even really Lancaster Blue fabric.  The fabric I had seen was a white ground with a blue print.  It's an excusable problem, I tended to just look quickly and pretend I'm not interested in the lot.  Below is the backing fabric and a sliver of the blue and white background fabric. 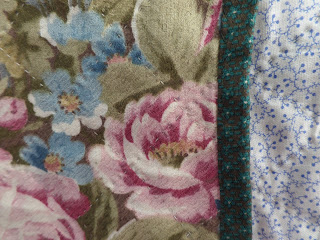 The quilt had been a gift.
There was a piece of muslin attached that said
"June from Mother." 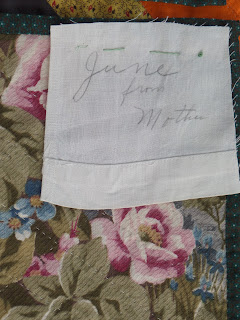 The quilt was "crisp" as they in the collection world; apparently it had never been used and was in pristine condition.
Carol jumped up and down and repeatedly yelled, "I can't believe it!"
I was simply stunned.  Sometimes when quilt mojo happens it really hits you in the gut and knocks the words right out of you.
I thanked my lucky stars and treasure the piece today.
Wishing you a safe and happy day!

Posted by Michele McLaughlin at 5:37 AM