I'm scanning a lot of my trade cards so that I have copies on my external hard drive.  This one is so cute!  It was published in 1881: 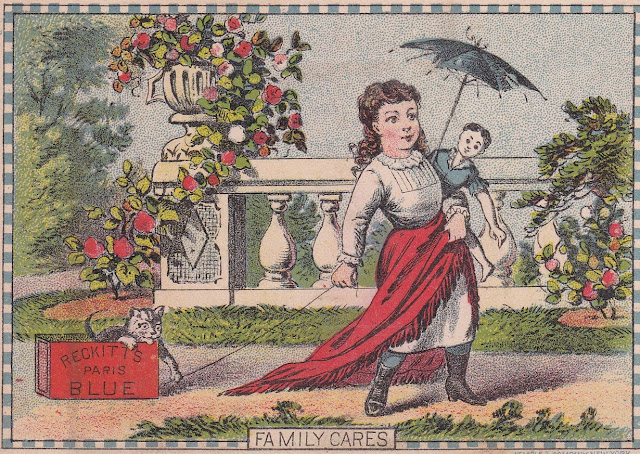 The image is a little girl carrying a doll and dragging a box behind her.  The title "Family Cares" is more about the little girl than the box she is dragging with the cat.  But the box is what the trade card is really advertising.  Paris Blue--aka--Prussian Blue--aka Berlin Blue is often discussed as the first synthetic dye.  Discovered by accident in the early 1700s.

My favorite image of Prussian Blue dye is actually a photograph of a dress (here) because the Prussian Blue Rosettes of the dress pop!

You might also enjoy this article on how Prussian Blue changed art.

Quilt history owes a lot to the color as well.  Here's a number of examples from Barbara Brackman's blog.

As for the trade card, it was partially to announce a contest for designs for Reckitt's Paris Blue Dye: 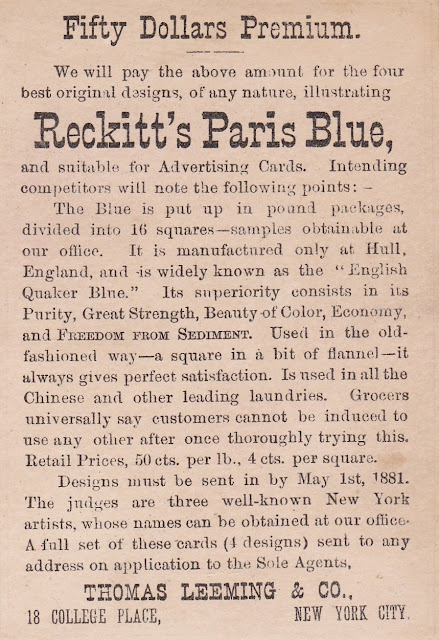 And finally, Prussian Blue is considered by the World Health Organization as one of the most essential medicines.  Actually the first place I ever heard of Prussian Blue was in a chemistry class.  The second was in a murder mystery written by Agatha Christie (the poison was thallium).   Prussian Blue is a critical antidote for patients who have ingested heavy metal poisons like thallium.

If you have anything to contribute to Flower Friday, please email me at allentownquilter@gmail.com