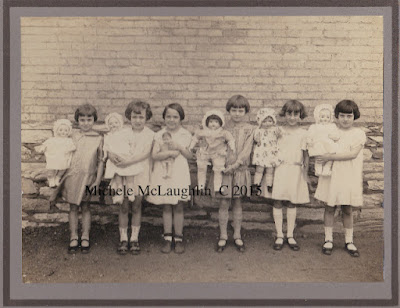 This week we are going to look at suffrage and dolls.  Dolls were used to promote the cause but I suspect that part of the reason might have been to encourage the next generation to think of equal rights even if this generation didn't get the vote.

This concept became clear when I read about Winifred Sackville Stoner.  In 1912, there were a variety of syndicated articles about the little girl who at 10 years old was a prodigy.  She had already had many poems published--one that you might know is "The History of the United States" and begins:

In Fourteen Hundred Ninety -Two, Columbus sailed the ocean blue
And found this land, the land of the Free, beloved by you, beloved by me... 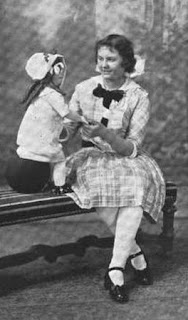 Although only 10 or 11 years old in 1912, Winifred believed in woman's suffrage and her poems about suffrage were widely published although I couldn't find any specific one to share with you.  Winifred was blessed with an above average intelligence and a mother who believed in "natural education" and that learning should be made fun for children.

Both mother and daughter created suffrage games that explained the concept of suffrage to boys and girls.  An article at the time cited, "They (children) will soon be the power in America.  It is the lead ones that lead us."  You can read more about Winifred at Wikipedia.

So this week we will be looking to escape bad news by studying how and what types of dolls were used to aid the suffrage cause.
I hope you find these posts fun.

Posted by Michele McLaughlin at 11:09 AM

Email ThisBlogThis!Share to TwitterShare to FacebookShare to Pinterest
Labels: Oh You Beautiful Doll