It appears that most of the crowd filled fairs are going to be cancelled this year in Pennsylvania.  Most of our agricultural fairs are usually held in the later part of the summer but I wanted to give a nod to the many suffragists who spent the dog days of summer in fair booths.  A net search of suffragists at fairs indicated that most states had suffrage booths at county fairs.  It was not unusual for there to be booths rented by the Antis.

I already posted about the Allentown Fair and that kind of situation here.

In 1915, suffragists at the Lehighton Fair received positive press for their booth: 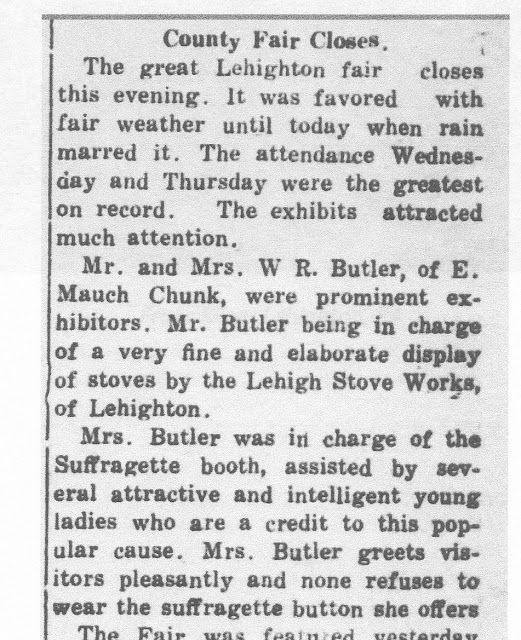 It is not surprising that most residents accepted suffrage buttons from Mrs. Butler.  The Butlers were a prominent family in Mauch Chunk (neighboring Lehighton) and is now known as Jim Thorpe, PA.  W. R. Butler not only the president of Lehigh Stove Works in Lehighton, but he was on the Board of directors of the Lehigh Valley Railroad Company.

Ellen Fielding Butler was William's second wife (his first wife had passed in 1885) and she was an active force for suffrage in the "slate belt" area.  She was a well-known singer before marrying Butler and became a prominent hostess in the region.

A prominent artist from this region was Franz Kline (1910-1962).  Here is his painting of Lehighton, PA

Have a wonderful day!

Posted by Michele McLaughlin at 4:32 AM