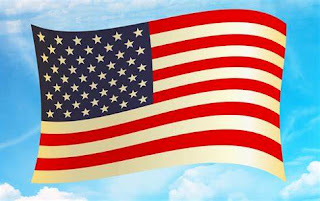 In 1884, there was a song published called "The Suffrage Flag".  The chorus goes like this:

"Hurrah!  Hurrah!  For Equal Rights Hurrah!
Hurrah for the suffrage flag that bears the woman's star!"

In 1902, a flag with only 4 stars was featured in a newspaper article: "The suffrage flag is like the United States flag excepting that it in the place of the stars for each state of the Union, the suffrage flag contains only four stars that represented Wyoming Idaho, Utah and Colorado."  I found  this on the Smithsonian website: 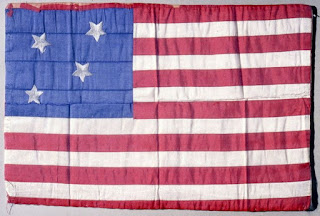 By 1912, a fifth star was added when Washington state granted women the right to vote. 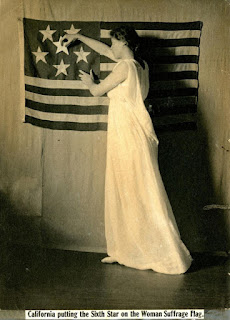 In 1916, Pennsylvania suffragists presented a flag to the National American Woman Suffrage Association Convention in Atlantic City.  It was yellow with 11 stars, these surround a blue eagle on wing clutching a yellow globe."  The flag was approved by the delegates and was first unfurled at the NAWSA headquarters in February 1917: 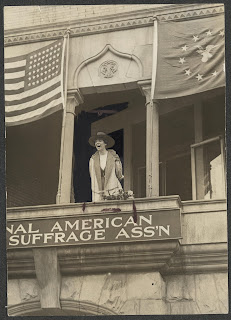 The suffrage flag is on the right.

And now for some interesting anecdotes about flags:

In 1909, Helen Lareine Baker of Spokane, Washington arranged to have a special train take her to the op of Pike's Peak so she could plant a suffrage flag on the top of the peak with "Votes for Women" printed on it.  Baker was a well known suffragist and one of the wealthiest women in the west; one newspaper noted that "she is the largest taxpayer in Washington."

In 1910, New York suffragists announced they placed suffrage flags on the graves of Susan B. Anthony, Elizabeth Cady Stanton, and Lucy Stone, and other suffragists.  This caused a bit of a ruckus with Antis who considered the flags a "desecration of graveyards." 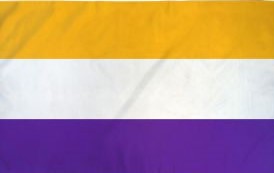 Flags have always held an emotional meaning to people.  In 1911, Two Berkeley college boys attempted to secure the suffrage flag at the Berkeley Suffrage Headquarters.  Newspaper speculated as to whether it was a fraternity prank or a plot by the Antis.  Unfortunately for the boys, a number of suffragists witnessed the act and "descended upon them" thus saving the flag.  No word on how the boys fared. 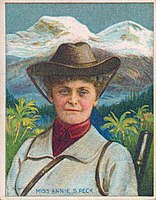 A cigarette silk featuring Annie E. Peck.  It's possible this silk was incorporated into some kind of quilted piece; it was very common to sew the silks into quilts in the early part of the 20th century.


Individual groups of suffragists almost always had their own flags with symbolic meaning.  Annie E. Peck, an explorer with a penchant for high altitudes, returned from South America after having planted the yellow suffrage pennant of the "Joan of Arc Suffrage League of New York" on one of the five icy summits of Corunpuna in southern Peru, estimated to tower 22,500 feet above sea level.

Posted by Michele McLaughlin at 5:46 AM