I want to focus on my two favorite coverlets today.  Yesterday Susan emailed me and said she wished I would feature the music coverlet again and it was one of the two I wanted to feature today.  I'm so sorry about the quality of these photos.  I tried to rephotograph both of theses pieces but I was not very successful.

I was scanning newspaper articles for more information about 20th century coverlets.  It's difficult because for the most part, the coverlets that are featured are colonial and early American woven wool coverlets like this: 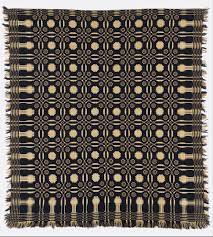 But then I found an article that made me stop in my tracks.  In 1941, there was a syndicated newspaper article that talked about the patterns that were used to weave the coverlets and how the instructions resembled musical scores: 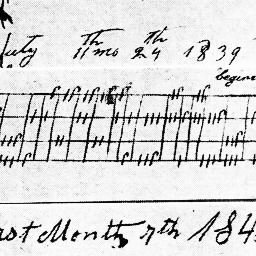 We don't know when my music coverlet was made.  Most of us had assumed it was made in the 1920s (still possible) but it is also possible that the maker read this article in the 1940s and said..."hmmm, that gives me an idea..." 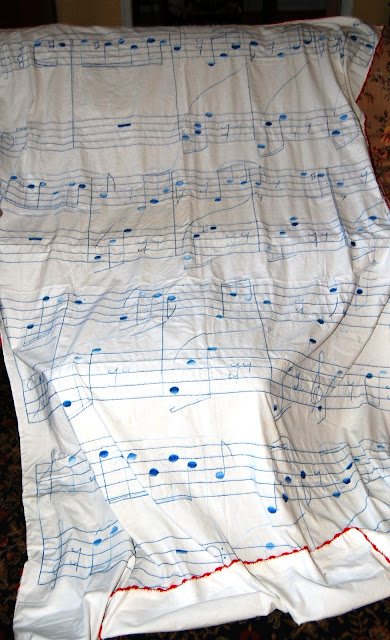 Whenever it was made, it is a coverlet made on a sheet with the Beethoven music of Fur Elise.  "Albumblatt" on the top of the piece refers to a musical term for a short musical composition. 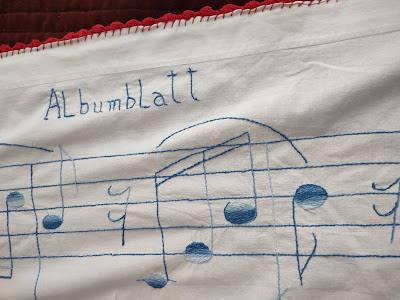 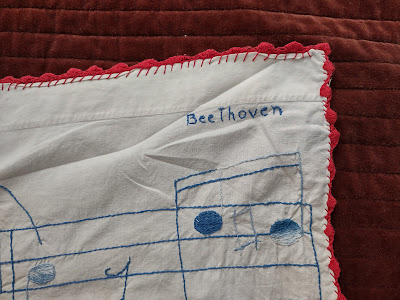 The piece was made with variegated thread.  Unfortunately, that doesn't help us date the piece; variegated embroidery threads were introduced as early as the 1890s.  The red crocheted border could have been done any time in the 20th century; the colors used: red, white, and blue have always been popular. 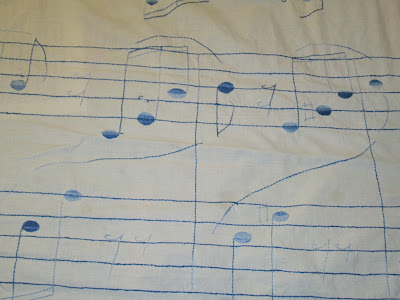 Still I love this piece because it was a labor of love and a unique coverlet invented by the maker.
***
The second coverlet I want to feature I purchased from Sue P. years ago.  I just fell in love with the embroidery. 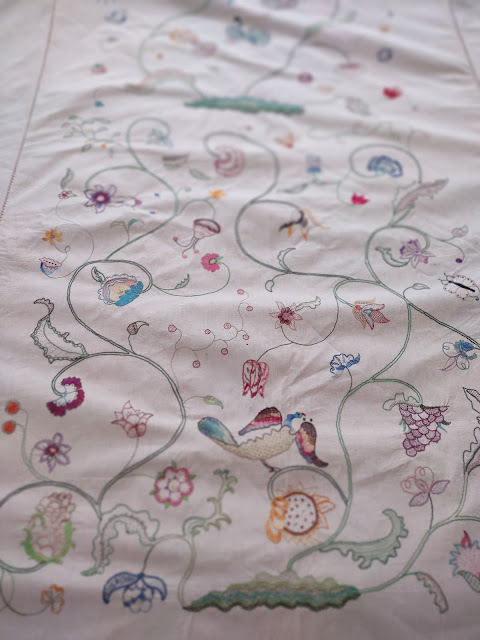 The piece features something that resembles "the tree of life" and what makes it special is the amazing embroidery and motifs.  A lot of the embroidery was done with a single thread, a technique I've only seen in my Nana Elsie's embroidery.
A variety of birds are featured: 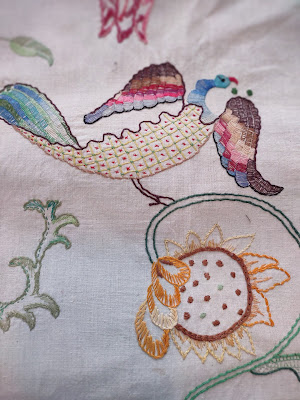 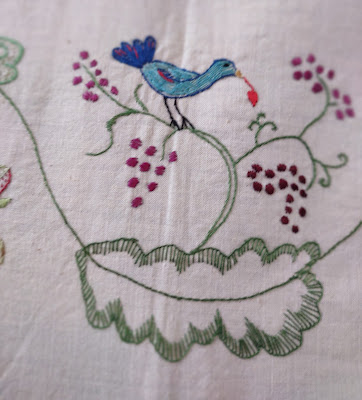 I've often wondered if this is a hummingbird, the bird has a long tongue that rolls up. 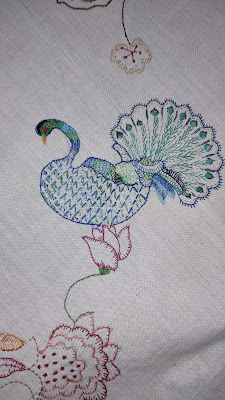 But the flowers!  They are my favorite.  From far away, some appear to be appliqued because of the variety of embroidered stitches. 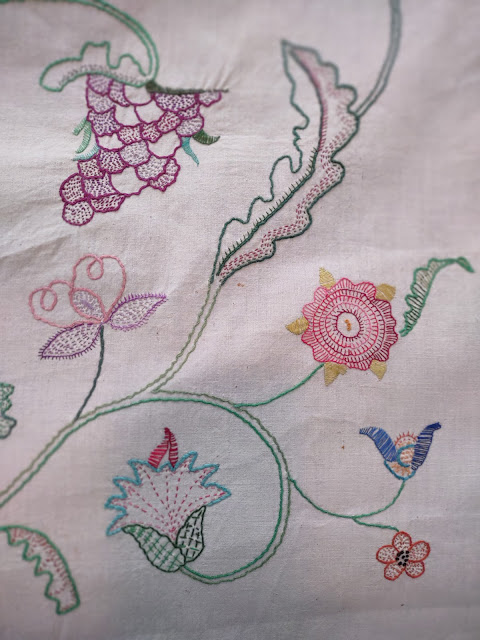 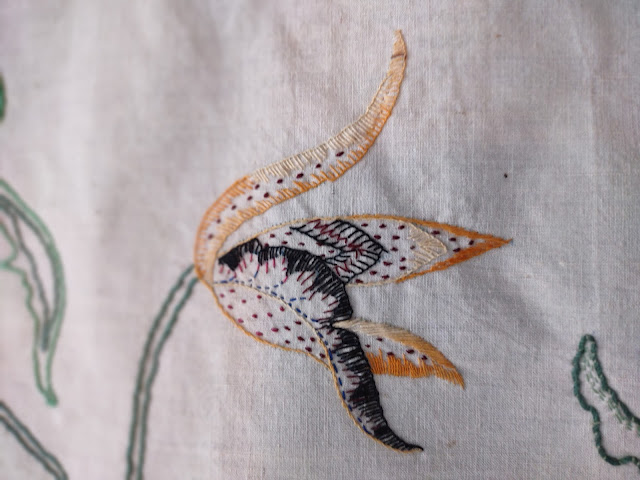 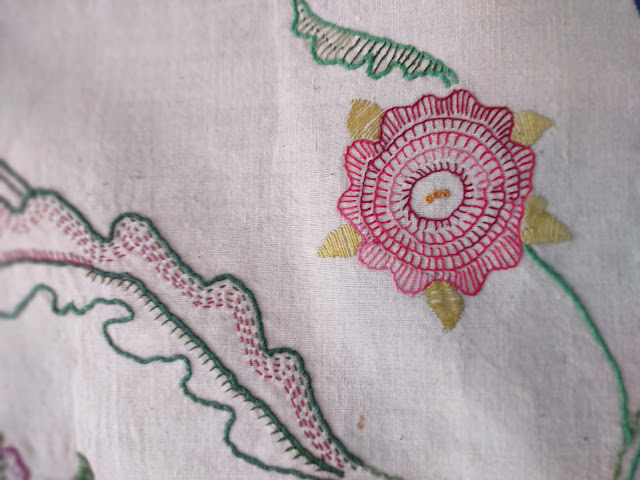 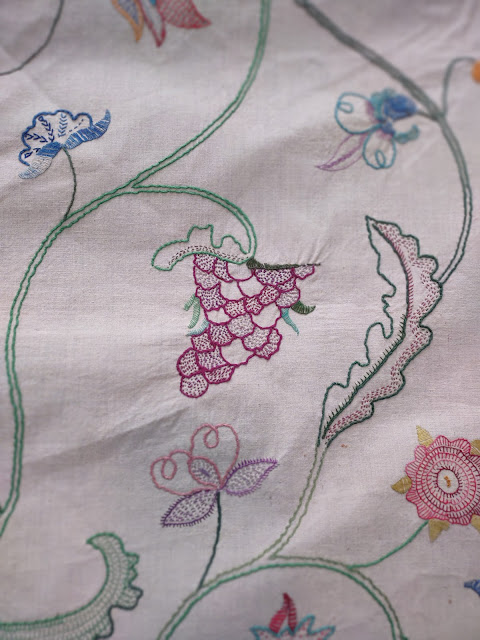 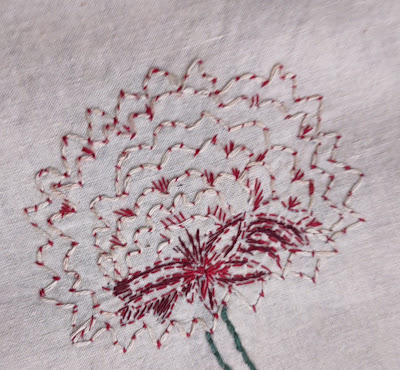 The age of the piece is unknown.  Many of the people thought that the pre-made border braid was possibly from the 1950s: 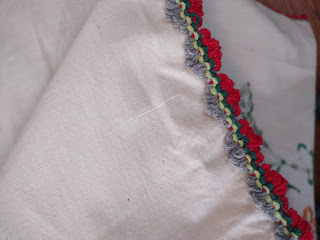 Whenever it was made, it is a piece of beauty that I enjoy studying for hours on end.  It's a little garden for the bed and that is a wonderful thing!
Speaking of flowers--do you have any growing in your magical gardens?  Please share your photos with the group by emailing me at allentownquilter@gmail.com
Have a safe and happy day!

Posted by Michele McLaughlin at 4:46 AM

Email ThisBlogThis!Share to TwitterShare to FacebookShare to Pinterest
Labels: Music and Floral Coverlet