During the Great Depression, the "seven and a half cent meal" was encouraged for families.  That's about $1.61 in today's currency. But what surprised me about the Great Depression was the behavior of the Roosevelts.  Both Eleanor and FDR were raised in luxury; Eleanor didn't know how to cook.  Still the White House--known for sumptuous meals and gourmet cooking--followed the practice of the seven and a half cent meal.  As Eleanor herself said, "It is not fair to ask of others what you are unwilling to do yourself."  During The Depression and World War 2, meals at the White House followed the same protocol expected of the public.  I can respect that!

So the White House was known for mediocre meals at this time.  Here is a great article for you to read ("Why FDR's White House Served Such Terrible Food")and here is another ("Here's the Scoop on Eleanor Roosevelt's Notoriously Bad White House Meals").  A more indepth look is here at the New Yorker and also interesting. 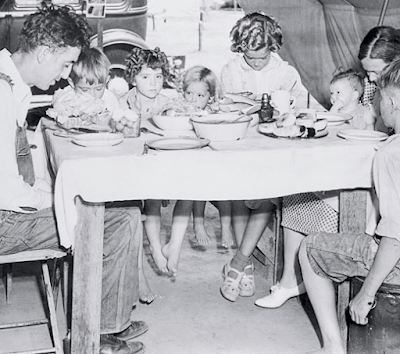 I received many comments and emails from you about foods you thought derived from The Great Depression.

"My grandmother served Chicken and Noodles which was chicken, thickened broth, and thick homemade noodles over a mound of mashed potatoes. She had 7 children and I always figured she was trying to stretch the chicken. They always had a garden and so canned tomatoes were available. My mother tried different recipes to get something that tasted like a dish she called; "Tomato Red" that her mother made. I think Grandma was making tomato gravy out of her canned tomatoes to go over rice or spaghetti.

We ate sauerkraut and hot dogs with mashed potatoes too.There was also bread and milk with fresh green onions and a dish my mother called "Hot Milk toast". It was hot buttered toast in a bowl with hot milk poured over it."

"My husband family has a dish like you described - soup over mashed potatoes. I thought it was a strange combination when I first had it (the soup has noodles in it!) but maybe it is a Depression Era throwback. It's actually very tasty!"

"The hotdogs with sauerkraut really struck home! We used to eat those a lot! Mom would partially slice them, pull open, stuff with kraut then wrap with bacon. We would grill them, they were so delicious! I had no idea that was a depression food item. My dad's family had a farm so they usually had enough to eat, it was my mother's family that struggled the most.I remember eating Rivel Soup as a child. My grandparents used to make another soup by browning bread cubes and pouring water over it. That never made it into mom's cooking."  Note:  a recipe for Rivel Soup is here.

"German mother, Ukrainian father, sauerkraut at every meal.  My father said his father would pack down the homemade sauerkraut with his barefeet.   Tasty!  My mother would mix some sauerkraut into hamburger  patties before  panfrying them.  It's good and keeps the patties moist. My dear friend Dottie,who passed just short of 103 yrs, made me a tomato dish from her farm childhood.  Dredge ripe, sliced tomatoes in flour.  Very slowly saute them in some type of fat (butter, margarine, veg oil) til they caramelize. Stir as they cook.  Season with salt and pepper.  Add whole milk to make a gravy.  Serve over mashed potatoes.   And that was dinner.  I loved it but never make it as good as she did.  Just for the record, I see nothing odd about hot dogs cooked in sauerkraut.   It's legit!

Folks from this part of rural NJ cream everything and put it on toast or mashed potatoes.  Asparagus,  tomatoes,  greenbeans, wax beans, peas, possum.  Well maybe not possum."
💚💚💚
I'm still not sure what "Tomato Red" is but now I'm wondering if that is the recipe that Sue described above?  Do you know?
Thanks to all who shared this week.  It's been wonderful to hear from you!
Have a safe and happy day!
Posted by Michele McLaughlin at 4:00 AM

Email ThisBlogThis!Share to TwitterShare to FacebookShare to Pinterest
Labels: seven and a half cent meals