Apologies in Advance:  There are some days when it is very difficult to post photos on blogger.  It's not a computer problem but a company problem.  I've done the best I can to include some photos or references. 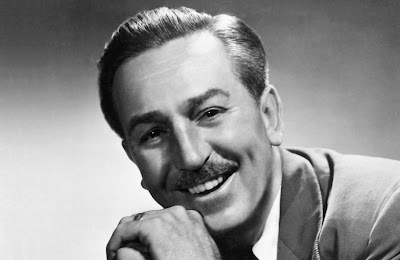 Walt Disney (1901-1966)
The impact of the Walt Disney studios on children cannot be denied.  This study however focuses on books and quilts.  Because the studio published so many books based on their cartoons, I've included the Disney characters in my research. 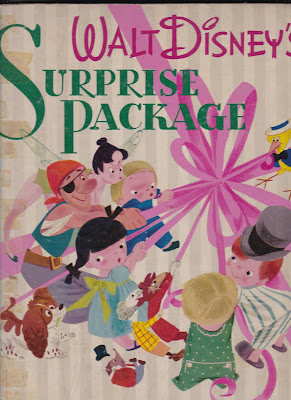 The only book my mother saved from her childhood was this 1944 edition of Walt Disney's Surprise Package.
Disney first partnership into the textile world was likely with the Vogart company.  In 1932, the company landed a licensing agreement with Walt Disnety productions and sold tinted pillow covers that featured Disney's characters including Minnie and Mickey Mouse. In one auction purchase, I found small pieces of Pinocchio fabric based on the Disney film characters.  The film was released in 1940 and the colors of the fabric matched the era.  Unfortunately I put the fabric in a very safe place.  Unfortunately it is VERY safe because for years I've been trying to remember where it is.
But the Disney books were extremely popular and here's a good reason why:  in 1944, they entered an agreement with a young company called "Little Golden Books"; a relationship that continues to this day.  Little Golden Books were affordable and could even be purchased at a grocery store.
I've never been able to find out exactly when Disney kit quilts were first marketed but on this website, there's an interesting quilt of an early Mickey Mouse quilt and a number of other Disney inspired quilts.
The kit quilts that were marketed were usually either appliqued or embroidered.  I suspect that more embroidered kits were made because there is a number of the quilts on the internet. The embroidered quilt kits allowed non-quilters to make pieces for their children.  Embroidery that is pre-printed is fairly easy and I suspect that is why these quilts were so popular.Here's an interesting example of Bambi.  An applique version of Alice in Wonderland is here.
My brother and I loved Chip and Dale so when it came to choosing a Disney themed quilt, I went with the chipmunks: 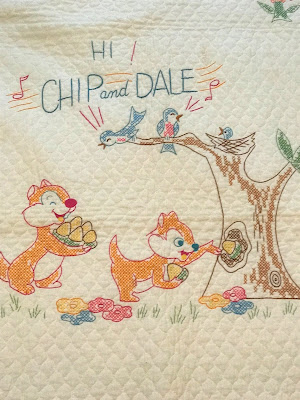 Disney products remain popular and there are tons of fabrics, panels, and kits that a quilter can make.
What Disney character is your favorite?
Have a safe and happy day!