In 1976, Spinning Wheel Antiques and Early Crafts Magazine published an article called "Sunbonnet Babies Encore".  The article explained how to distinguish various sunbonnet babies by illustrator.  There was even a design with the various styles of sunbonnets and who made them.  It sounds ludicrous, doesn't it?

Bertha Corbett Melcher is a great example of what happened to a lot of illustrators.  Whenever an illustrator became successful, there were always folks who tried to capitalize on the success of the original work.

Some just followed the example and created similar characters like Dorothy Dixon who did a series of illustrated postcards that were popular in the early 20th century: 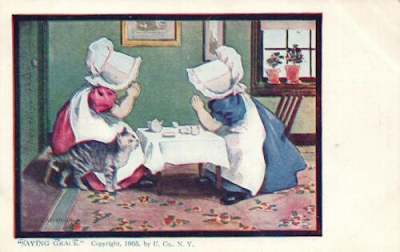 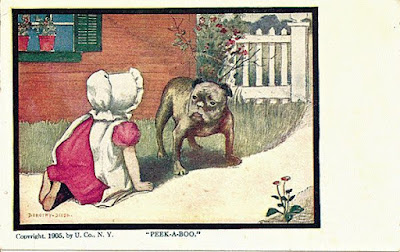 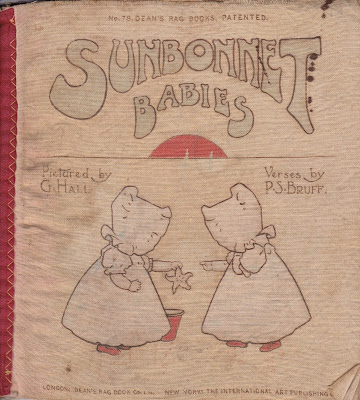 The cloth book featured characters almost exactly like Bertha's, but doing things that British children could relate to like having tea: 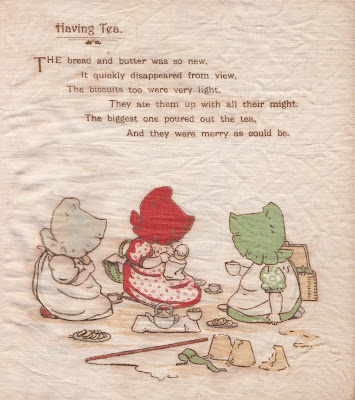 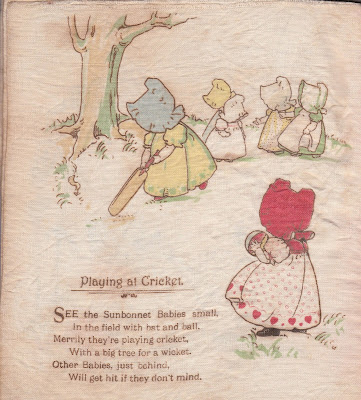 But probably the most brazen imitator was Bernhardt Wall, not because he copied her idea but because he insisted he invented the sunbonnets.  Bertha self published in 1900.  His postcard illustrations were published a few years later than Bertha's.  Wall was nicknamed "The King of the Postcards" and his sunbonnets have a very specific look to them.  The background was usually dark, the color of the bonnet a vivid white, and the child was usually dressed in a red dress: 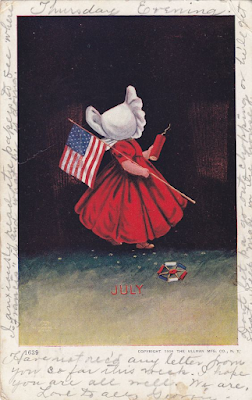 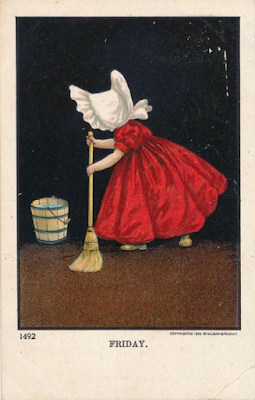 He even had published books and used the pseudonym "Uncle Milton". 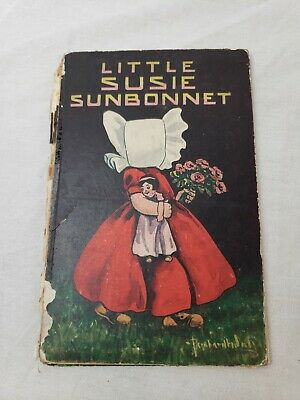 Bertha countered by calling herself "The Mother of the Sunbonnet Babies" which was picked up by publications everywhere.  But here is another interesting aspect:  the original sunbonnet babies had names--Molly and May. 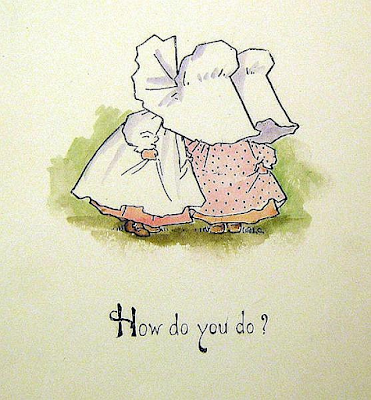 Most researchers attribute Walls' Susie Sunbonnet to the nickname "Sunbonnet Sue".
If all that wasn't enough, a 1908 Broadway play called School Days featured a song called "Sunbonnet Sue" and the name seems to have stuck: 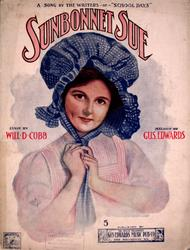 I could go on and on about imitators, but I'm sure you are beginning to get the idea.  The diversity of the sunbonnets was translated into our quilts.  At first there were embroidery patterns created:
Featuring Bertha's Sunbonnet Babies: 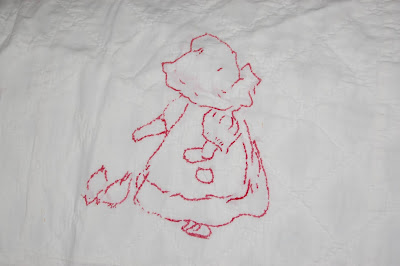 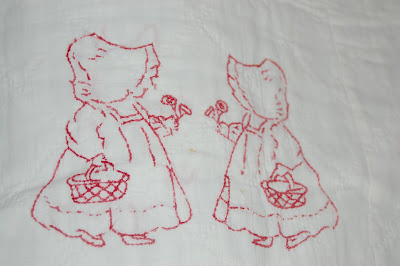 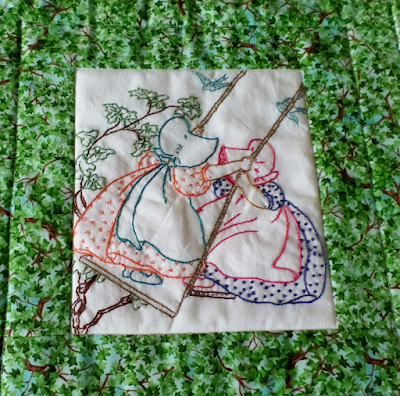 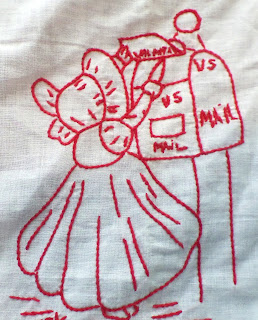 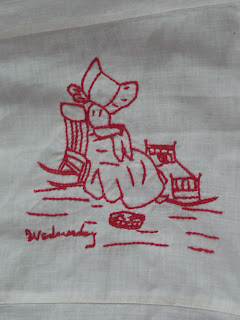 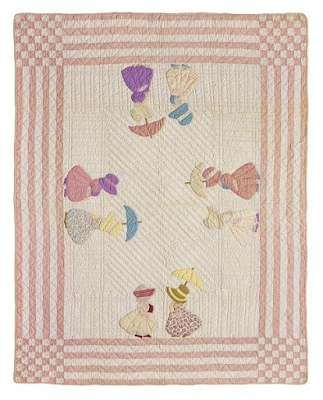 At this point, the sunbonnet craze hit quilt companies and designers and all kinds of sunbonnet variations were marketed.  The reason was simple.  The patterns made charming quilts for children and the bonnet obscured the face.  Faces are hard enough to draw, even more difficult to embroider: 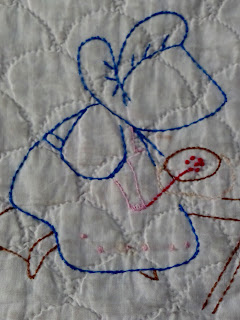 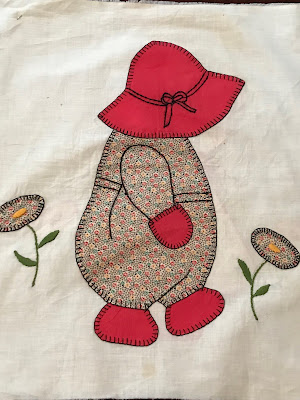 By the 1920s, grown women were depicted as part of the Sunbonnet family.  Yes there were a lot of awful patterns.  But there were some charming ones too like these: 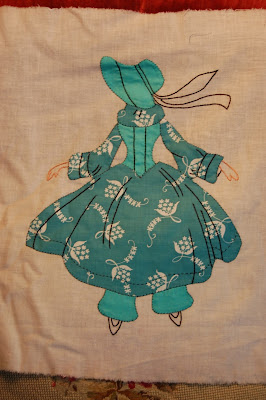 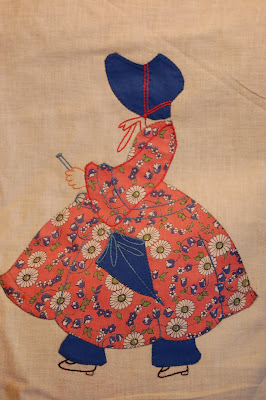 Out of all the illustrators we have and will study, none had as big of an impact on quilting as Bertha Corbett Melcher's sunbonnets.  Even in the 1950s and 1960s when quilting experienced a lull, sunbonnet baby quilts were made for children.  In fact as I tell my audiences when I lecture about this pattern, I challenge you to find a quilt pattern with more variations than the sunbonnets. 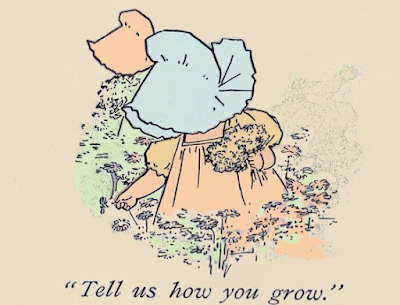 Tomorrow is Flower Friday so if you have images to share, please email me at allentownquilter@gmail.com
Have a safe and happy day!
Posted by Michele McLaughlin at 8:21 AM