A year ago, we published this a challenge for quilters.  You can read it here.  To be honest, we didn't know if anyone would respond to the challenge although there was a lot of interest from the guilds we visited before the pandemic.  Once the pandemic hit, we really didn't know if anyone would visit and we want to thank everyone for responding.  I did email Cass about her quilt to see if she wanted it considered for the challenge but I haven't heard back from her. I hope she is okay.

What has moved Beth and I the most about these quilts is how much research and thought you put into each of your quilts.  Here are the quilts that were entered for the challenge in alphabetical order by first name: 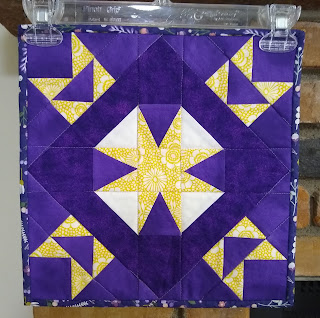 "I grew up in Rochester, New York, also the home of Susan B. Anthony from 1845 when she was 25 until her death in 1906. The Susan B. Anthony Museum and House at 17 Madison Street in Rochester is a place I visited more than once while growing up there. With 2020 being the Women's Suffrage Centennial, I've enjoyed learning more about Susan B. Anthony and her contemporaries who worked so hard to give me, and all women, the right to vote. We owe them so much!
To honor Susan, and my home state of New York, I've made a New York Star. This is a paper-pieced block and can be found at the Quilter's Cache website. I made the New York Star in the American Suffrage colors of purple, white, and yellow which symbolize loyalty, purity, and hope. Evidently, the color yellow was also used to pay tribute to Susan B. Anthony and Elizabeth Cady Stanton who used the sunflower during a campaign for state suffrage in Kansas in 1867. The yellow floral fabric in my New York Star fits the suffrage colors and symbols as well.
While doing a bit of research to write about my suffrage quilt project I found this interesting article!"
https://www.fastcompany.com/90309194/progressive-women-are-wearing-white-they-should-wear-purple-and-yellow-too 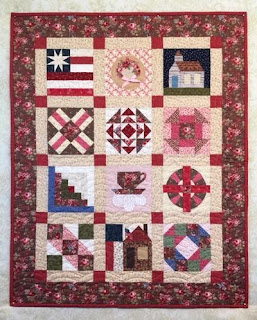 "I would like to enter my quilt in the Suffrage Centennial Challenge. I call it "The Esther Morris Quilt: A Celebration of a Remarkable Life." It is a sampler quilt, and the blocks represent people, places, and events in the life of Esther Morris: abolitionist, suffragist, and the first female justice of the peace in the world. In addition to the picture, I have attached a copy of the documentation which I printed on fabric and pieced into the quilt's backing. It explains the significance of each block. Esther lived in the Wyoming Territory. It is said that two days before the local election in 1869 she gave a tea party for the prominent people of the town, including the candidates for the territorial legislature. She convinced them to introduce a bill for suffrage if elected. The bill was introduced, passed, and signed by the governor on December 10th, 1869. On September 6, 1870, the women of Wyoming were able to vote, 50 years before the rest of the country. She continued to promote suffrage for all women into her 80's.

I did a lot of research on Esther as I made the quilt, and was amazed by all that she accomplished. A real inspiration, especially considering the times in which she lived. Thank you for this opportunity to share her story." 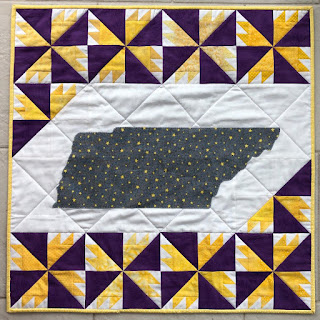 "When Tennessee legislators were called back to a special session in August 1920 to vote on ratification of the 19 th amendment, they were greeted by suffragists wearing yellow roses, and opponents wearing red roses.  Thus the “War of the Roses” began.  By a single vote, Tennessee became the required 36 th state to ratify.  Supporters referred to Tennessee as The Perfect 36.  This quilt has 36 yellow rosebuds surrounding the state." 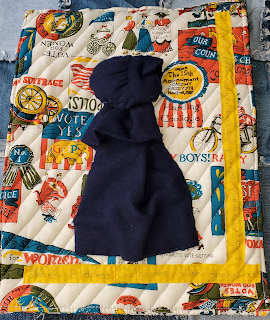 Gender equality is one of the Shaker tenets but Shakers usually kept their actions within their communities.
Catherine Allen (1951-1922) was more active in both peace causes and equal suffrage outside her community at Mount Lebanon , New York. As a child she was sent to board with the North Family at Mount Lebanon in 1865. She stayed with the community and in 1908 she became an Eldress of the Central Ministry.
As a Shaker leader she was an active women's suffrage proponent.  She spoke at conferences and led petitions urging women's suffrage.
The production of Shaker "Dorothy" cloaks became a profitable business venture from 1890 to the 1930s. Mrs. Grover Cleveland wore one to President Cleveland's second inauguration in 1893. The cloaks were wool lined in satin with a satin ribbon at the neck.
I chose to quilt a cloak as a representation of a Shaker I admire.
Samantha's Quilt 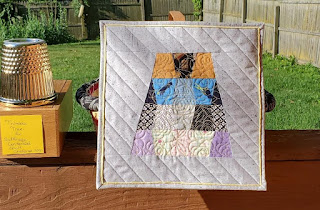 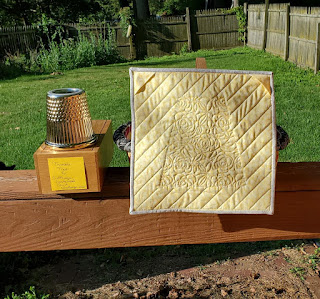 "My entry for the suffrage centennial quilt challenge is called Thimble Tree.  The thimble is created by using the tumbler shape.  When placed one way it looks like a small thimble!

The polka dot fabric represents the women in my family tree.  The bottom row is my generation.  Above is my mom's generation.  My grandma is in the next row and my two great grandmothers are on the top.  Stories and family heirlooms have been passed down from generation to generation.  I often wonder what it would have been like to grow up during their era.  Surely there was progress during the eras of my grandma and great grandma; however, it would not have been possible without continued support and sacrifices.

It is quilted with yellow roses.  Supporters of women’s voting rights—or suffrage—wore yellow roses. The quilting creates an eye catching view of a thimble from the back side.

On Tuesday we will be posting the winners of the challenge!  Stay tuned!

Posted by Michele McLaughlin at 3:53 AM