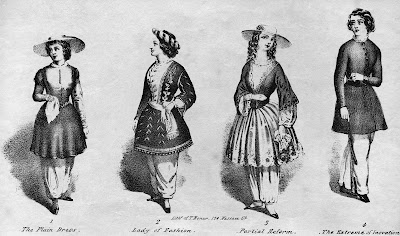 My husband says that if is his feet get wet or cold, he is miserable because it makes the rest of his body cold.  I feel that way as well--but about my legs.  I've always wondered how women in the 19th century fared with skirts on.  Even with quilted petticoats, I wonder how many women had to go through the day with cold legs.

Years ago, Beth and I took apart a tied comfort, convinced we would find a quilt that had been upcycled as batting.  Instead we found a quilted petticoat in the piece. 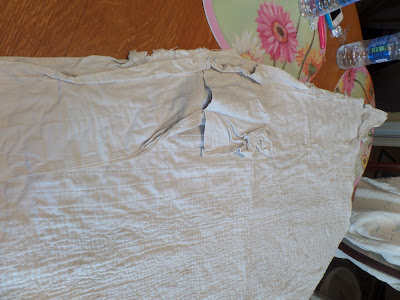 In the 1850s,  a new fashion was introduced called "Turkish dress" or even "reform dress".  You may know them by there more common name:  bloomers.   The trend was not only fashion inspired but a rebellion against uncomfortable--and often unhealthy--attire women wore during the 19th century.

Susan B. Anthony and other suffragists adopted the fashion briefly.  "Aunt Susan" complained that too much attention was being given to what she wore and not what she advocated;  she abandoned the fashion.

The name "Bloomers" was due to a woman named Amelia Bloomer, editor of the temperance publication, The Lily.  In 1951, she announced she had adopted the style.  Newspapers dubbed the new style after Amelia and soon the country was Bloomer crazy.  Bloomer parties and even bloomer balls were held.

Most importantly, women in factories were encouraged to wear them; the style was safer for the women around the equipment.
Bloomers made a resurgence in the late 19th century when women began to ride bicycles. For more information about Amelia and the bloomer craze (as well as her integral part in introducing Susan B. Anthony to Elizabeth Cady Stanton), check out this wonderful Smithsonian article.

Posted by Michele McLaughlin at 6:45 AM