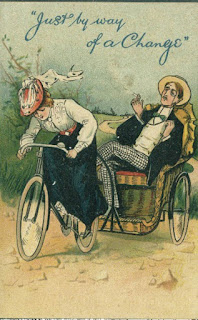 One of the challenges during the pandemic has been grocery shopping.  You all know what I mean.  So for a change of pace, let's talk about shopping, suffrage style.

In March of 1913, newspapers from all over the country carried a story about the first suffrage grocery store in New York City. 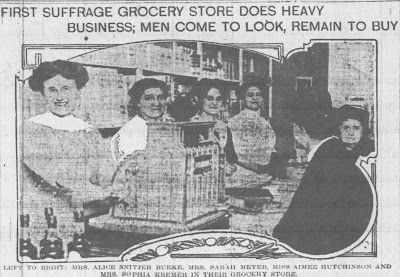 It's a success, a glorious, inspiring success," Miss
Aimee Hutchinson told the press.  Newspapers speculated that Miss Hutchinson was one of the most beautiful suffragists.  Apparently, her beauty was a benefit to the success of the store.  One man came to buy a pack of matches and left with 6 pounds of cheese, a dozen oranges, 2 dozen eggs, a large bottle of olives and a package of bread.

"You're a wonder," the man told Hutchinson.  "It's a good thing you weren't selling white elephants here or I'd be leading a pair with a string."

Aimee Hutchinson was a well known suffragist.  She had become known when she lost her job teaching at a Catholic school in 1912, for attending a suffrage parade. 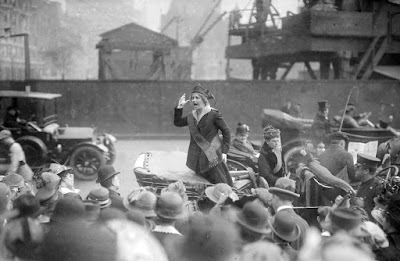 Still, success for the store came at a cost.  Two weeks after the store opened, the two delivery boys hired by the store quit.  The boys had been tormented while pushing their " yellow delivery cart printed with "Votes for Women" .  Women volunteers began to deliver the goods and were in search of a "strong woman" to push the cart who wasn't afraid of inclement weather.

Business was good and a second store was slated to open at Broadway and Ninety-Third Streets.

One of the interesting aspects of this venture was that the suffragists chose to sell "pure food" and gave preference to women farmers.  I've never found out what happened to the shops or when they closed.

I would have liked to have seen eggs wrapped in yellow ribbon with "votes for women" on them, wouldn't you?

Have a safe and happy day.
Posted by Michele McLaughlin at 9:52 AM