Happy Tuesday!
Last Tuesday I posted a story about a woman who made a quilt from her son's clothing.  Susan asked:  What is a wash suit?  Well I had assumed it was washable but I tried to investigate it a bit further as well.
As far as I can tell, Boys'--and even Men's--"Wash suits" didn't appear until the end of the 19th century.  I think 1889 was the first ad I found. 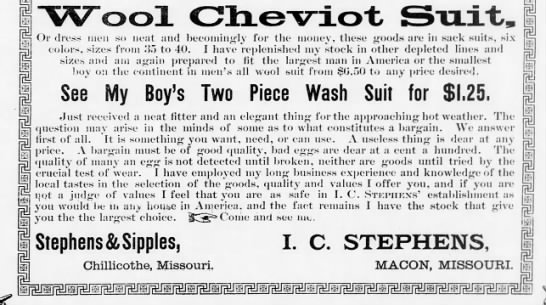 By this time, the industrial revolution had hit children's clothing and through the 1890s, more boys' clothes appeared in ads well into the 20th century: 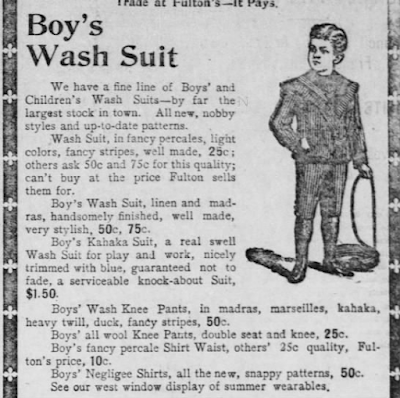 1900 ad
I suspect--but am not certain--the the "wash suit" was a marketing ploy to warm the hearts of mothers.  Some women still opted to make their children's clothing.  The introduction of the electric sewing machine in 1889 (by Singer) would have made the process easier (if you home had electricity).
Thus indicating that ready made boys' clothing was washable might have been an important marketing ploy.
It may have been similar to the marketing that appeared in the 1950s and 1960s of "wash and wear" clothing.  This line of clothing was made of synthetic/polyester fabrics. 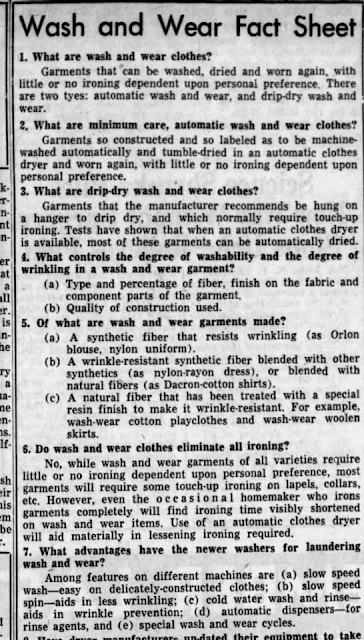 1958 explanation of wash and wear clothing.
One of the challenges in researching this question (besides the fact that I'm not a fashion historian) is that there appears to be less information published on the topic.  Most articles focus on the style of clothing and not the fabric or durability.
Anyway, it was fun to investigate!  Thanks for the question Susan!
Have a safe and happy day!

Posted by Michele McLaughlin at 4:14 AM