It is Kate's work we want to study because her work shows up on so many of our quilts.  As technology in sewing and even embroidery improved, so did publishing.  Greenaway's art was reproduced in books by an improved printing process called chromoxylography.  The printing process was time consuming but created a greater variety of colors, tones, and shading than previous printing techniques.  It was the perfect technique for Greenaway's artwork.
Like many illustrators, much of Greenaway's earlier career started in greeting cards and a few magazine illustrations.  Her book Under the Window was published in 1879 and was a great success. 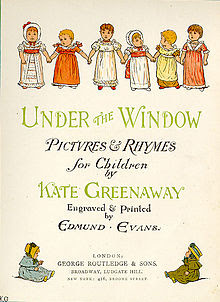 Her books and illustrations continued with great success throughout the next decades.  She would become the first woman illustrator to actually earn a decent living from her work. 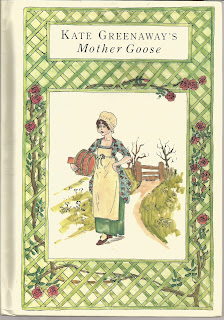 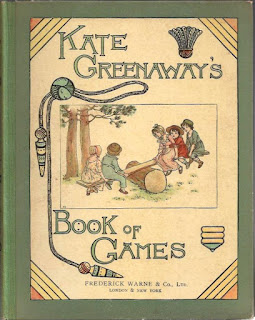 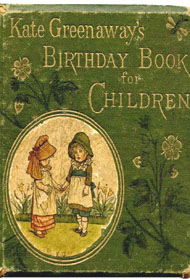 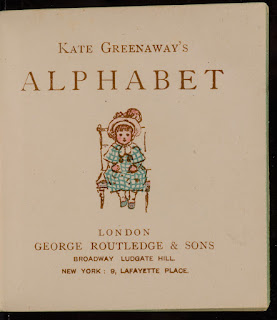 Greenaway depicted children as innocent looking with pensive expressions.  Her children were dressed in Regency-style attire (The Regency period was 1811-1820; films of Jane Austen's books exhibit the attire of that era).  Girls often were depicted in high waisted dresses with mobcaps;  boys wore skeleton suits. 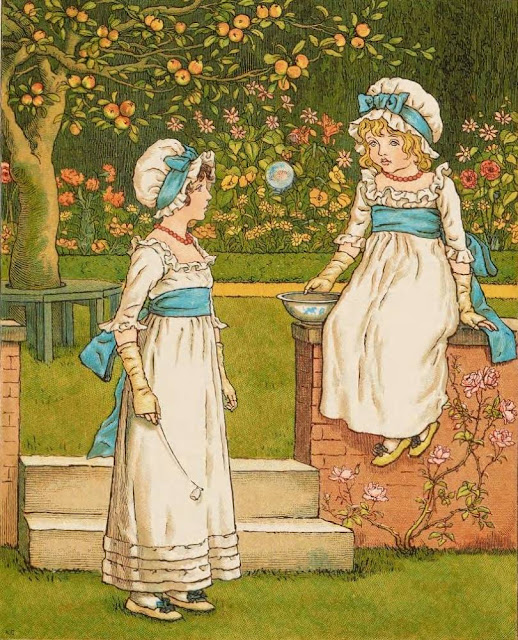 Above: a skeleton suit for a boy.
The popular illustrations generated a fashion fad.  Liberty of London marketed "Greenaway clothing" for children.  China was decorated with her figures and even wallpaper printed: Her work was beloved not only in the U.K. and U.S. but in many European countries as well.  Kate was amused to learn that she was so popular in Germany that Germans were convinced she was actually German.
Unfortunately, there were also many companies that tried to copy her work, some even wrote books and crudely used her style in children's books.     As one writer would note about Greenaway:
"In France and England there were also many manufacturers who recognised the adaptability of her designs for printed fabrics and did not hesitate to 'lift' them for their own purposes." (1) 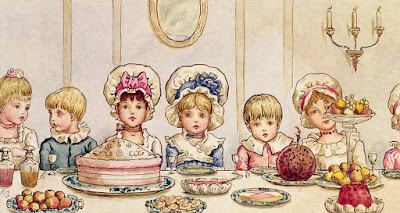 The problem of copyright protection would plague most illustrators well into the 20th century.
It was only natural that the highly popular illustrations would be sought for embroidery patterns.    The Greenaway figures appear again and again on crazy and redwork quilts of the late 19th and early 20th centuries.  Her illustrations were published as iron-on transfers by William Briggs who had patented the first iron-on process.
A great mystery is why biographers don't talk about the inclusion of her work into Briggs' transfer books.   It is odd that of all the products biographers mention, embroidery transfers are not discussed outside of quilt books.
The transfer books notate the figures are "Village Life by Kate Greenaway" and the word copyright is printed on the pages which makes me think that she gave permission to have her illustrations to be reproduced: 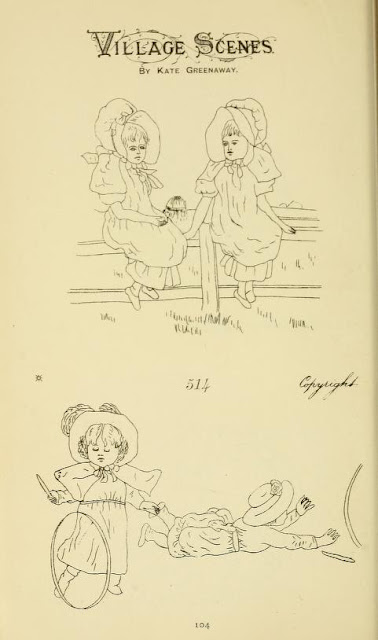 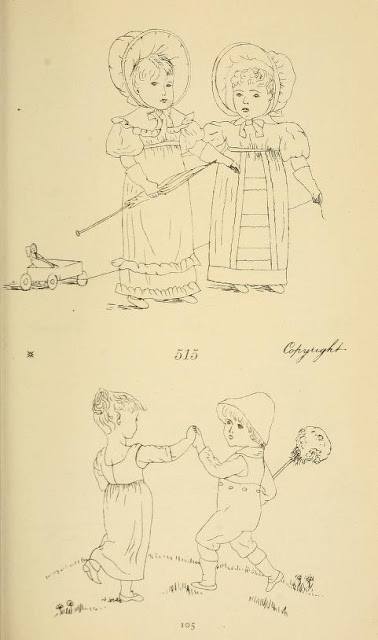 The images I am sharing are on redwork because the images show up better.  Often on crazy quilts there is a problem with lack of contrast and the figures don't show up as well.  Painted characters or worn from age: 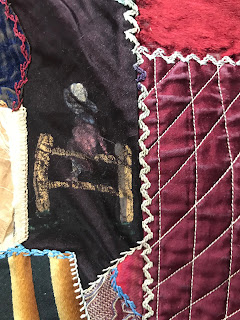 A favorite Greenaway motif used on quilts is the "Scandal" illustration: 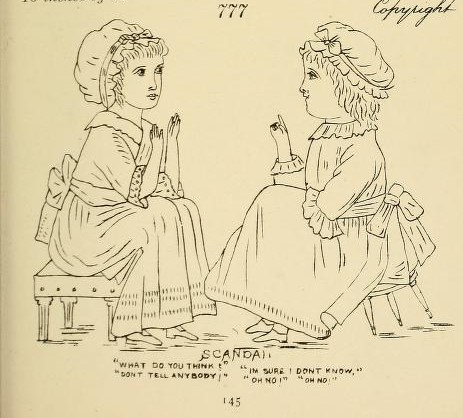 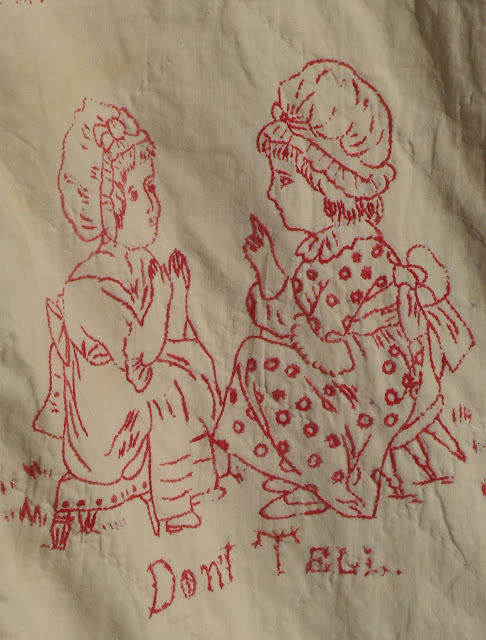 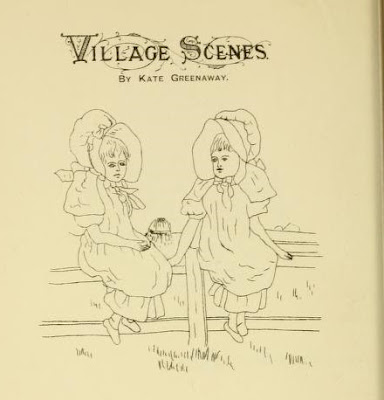 Half of the transfer (above) was used for this quilt made by a young child here in the Lehigh Valley: 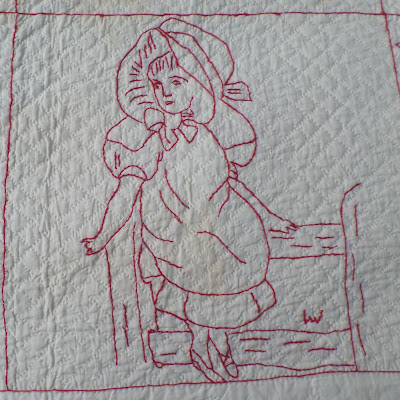 Some other Greenaway characters in redwork: 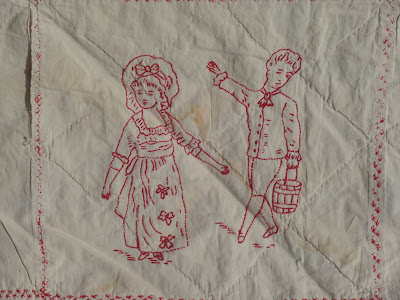 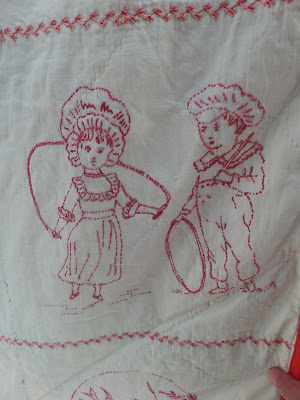 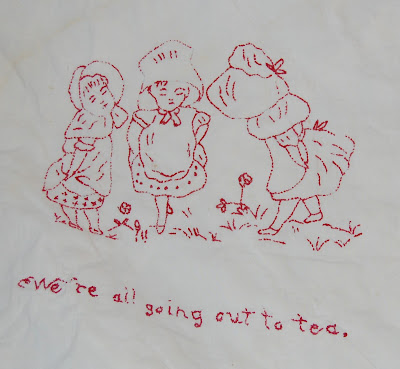 Kate died in 1901 of breast cancer.  She had never married.  Her books continue to be marketed and transfers of her designs are still available.  She set a standard for women in the world of illustration. In 1955, The Kate Greenaway Medal was established in the United Kingdom.  The award celebrates "the most distinguished illustration in a book for children."
Kate Greenaway created the precedent of incorporating illustrations of children's books onto our quilts.
Have a safe and happy day!