The Royals and Sewing

The internet and news is buzzing about Meghan and Harry's interview last night on Oprah.  It seemed like a good time to post these articles.

Nobility of all sorts were expected to help the common folk.  The idea of noblisse oblige meant that people of privilege were expected to help the less fortunate.  In 1872, the Royal Society of Needlework was founded to help teach impoverished women a skill (usually embroidery).  Queen Victoria was the first patron of the society which is why the name royal was added to the society.  Women in the late 19th century had few career choices and one of the aspects of this was that women would be paid for their work instead of being forced to pursue less moral work.  The Royal Society of Needlework was featured at the 1976 Centennial here in Philadelphia and Americans were greatly enamored with the concept.  Candace Wheeler founded the New York Exchange for Women's Work and the Society of Decorative Arts.

In 1927, Princess Mary (later Queen Mary and mother of Elizabeth) was charmed by quilts that miners' wives made: 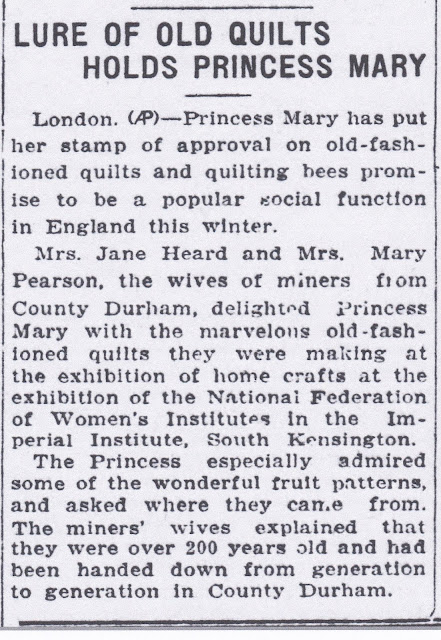 In 1929, another quilt was begun for Queen Mary, wife of George V and mother-in-law to Princess Mary:

Both of the Queen Mary's of the 20th century where involved in a sewing guild that made clothing for ophaned children which is now referred to as the Queen Mother's Clothing Guild.

Yes, many of these guilds still are alive and well.

Some royals did sew.  One of my favorite pieces was the quilt made by Queen Lili'uokalani.  She sewed a crazy quilt while imprisoned.  You can explore her lovely work here.

Another imprisoned royal, Mary Queen of Scots, did needlework while incarcerated.  The V & A has a great article and photos here.

Email ThisBlogThis!Share to TwitterShare to FacebookShare to Pinterest
Labels: The Royals and Sewing