Ten years ago, my interest in men who quilt was heightened by a visitor who attended our local quilt study group.  Her name was Grace and she had contacted a local church to see about repairing a quilt she inherited from her grandmother.  It was a lucky thing too because Pastor Pam, the woman she talked to at the church was not only a great quilter but a member of our study group.

The quilt she brought to the meeting was indeed in disrepair.  But it was the story that interested me.

When Grace was a little girl, she would often accompany her grandmother to Joseph P. Deibert's house.  Her grandmother, Emma M. Reichard, was Joseph's housekeeper.  From Grace's account, I gathered that he was infirmed but would pass the time embroidering and sewing.  Emma would then quilt the tops for him. 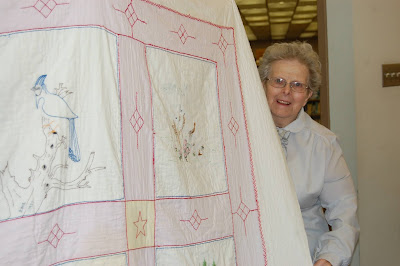 Grace and the quilt she brought to the meeting.
Grace explained that Joseph would copy photographs from calendars and embroider the blocks. 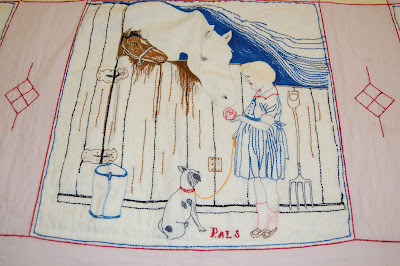 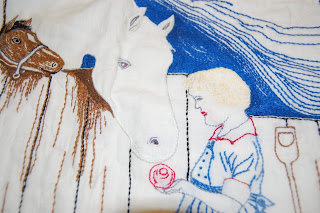 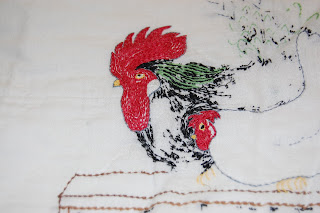 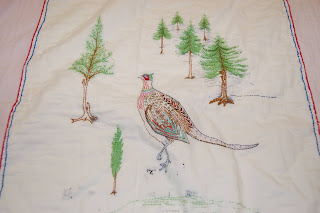 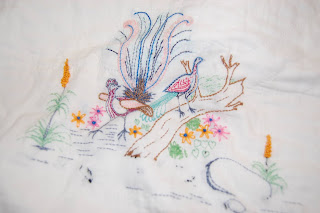 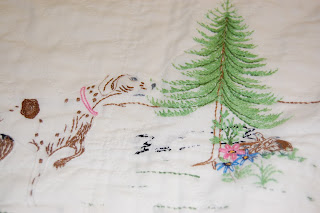 The piece carries the initials for both makers: 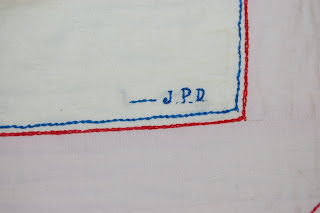 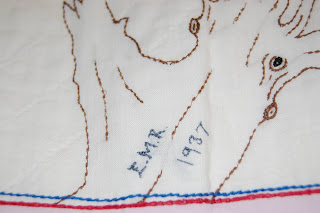 This is of particular interest because it recognizes that it is a collaborative effort.
Grace said that Joseph was a really famous man and had even written a book.  Her Grandmother had made hundreds of quilts and was well known for her quilting.  So I began to investigate.
Joseph Deibert was written about in the History of Lehigh County because of his great influence on education, particularly in the Schnecksville area.  He had graduated from Kutztown Normal School (now Kutztown University) in 1875 and had worked tirelessly as an educator.  Often referred to as the Father of Teachers, it was speculated that about 150 of his students had gone on to become teachers themselves.  He wrote a few text books but the book that we are most interested in is his self-published book entitled Shining Lights of Schnecksville, 1840-1940.  Published in 1940, the quilt and the book received a lot of local publicity. 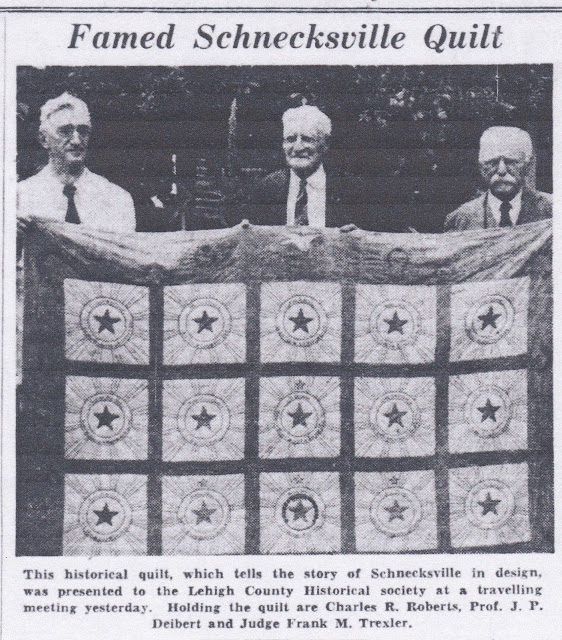 1940
Like any enthusiastic quiltmaker, he used the quilt as a metaphor in his book.  Each part of the quilt is used to relay the story of his region:
"Conspicuous on the top of the border of the quilt is the centerpiece on which is appliqued a white dove hovering above the clouds amidst heavenly rays, and symbolizing God's approval of faithful service."
"On either side of this block are the names of two teachers of meritorious service, to whom special recognition is due..."
"The body of the quilt consists of twenty-five white blocks seperated by a blue filling, each bearing the name of some one that has contributed largely to the welfare of the community,  The blocks have each a large star appliqued in the center within two concenteric circles embroidered in blue..."
Another quilt Deibert and Reichard were known for was "God's Autumn Cover" quilt pictured below: 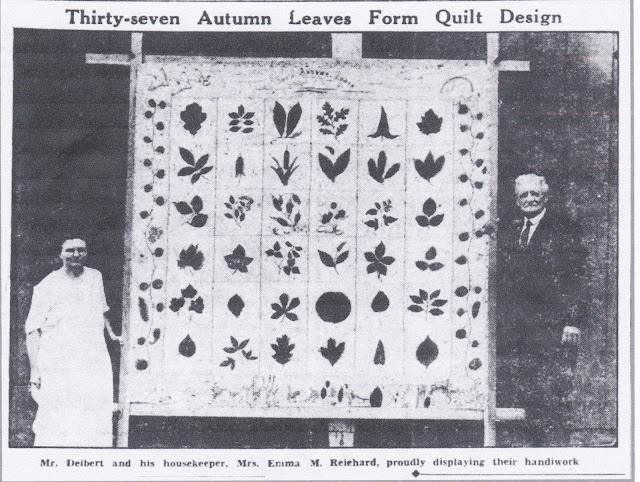 The body of this article is of interest because it relays the process that the pair used: 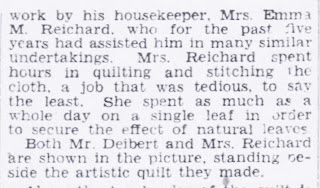 Nearly 30 years after Deibert's death, "God's Autumn Cover" was again featured in the newspaper (seated is one of Emma's daughters).  A couple of things of note on this piece--you can see the actual border which is embellished with embroidery and the work on some of the leaves:

In this article, we learn more that Deibert was the designer of the quilt and that he drew each leaf on the fabric.  Also of interest is that Deibert wrote a book about this quilt as well History of God's Autumn Cover.  The book was typewritten and I've never found a copy of it but the article cites "Deibert's book contains an essay, poem or hymn associated with each of the pictures."   Of note: 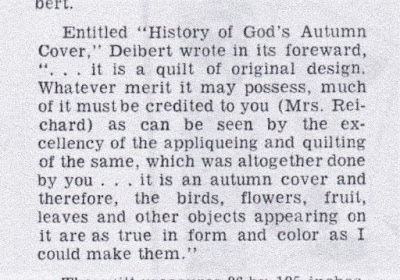 The two quilters enjoyed the process of this quilt so much that they actually made two quilts of this pattern.
Reichard worked for Deibert for 13 years before his death.  Deibert in particular is mentioned in a number of books as a quilting man--including Man-Made Quilts: Civil War to the Present by  Jean M. Burks and Joe Cunningham and Twentieth Century Quilts 1900-1950 by Thomas Woodard and Blanche Greenstein.
In 1971, Emma passed as well.  Her obituary truly honored her love of quilting. 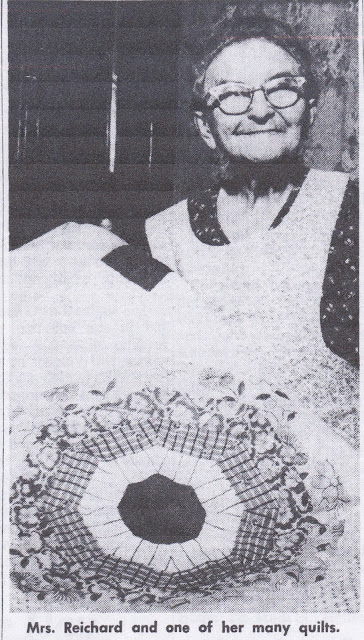 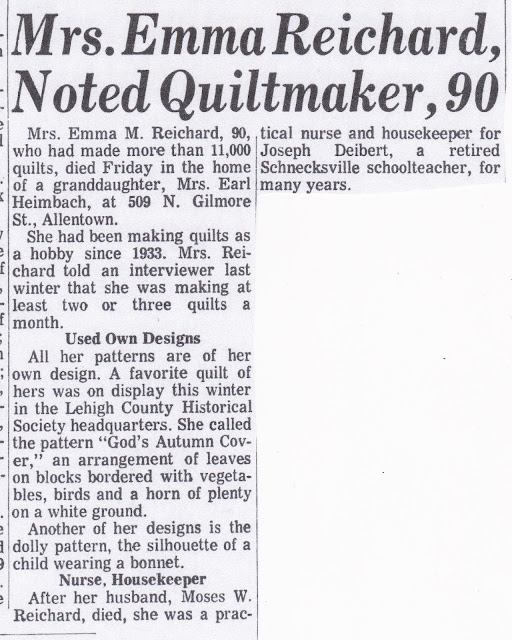 It must have been wonderful for the pair to share companionship and a mutual passion for quilts.
I hope you've enjoyed this little series on men who quilt!  Tomorrow I'll be giving you a clue on the next upcoming series!
Have a safe and happy day!

Posted by Michele McLaughlin at 4:27 AM

Email ThisBlogThis!Share to TwitterShare to FacebookShare to Pinterest
Labels: Men Who Quilt 13