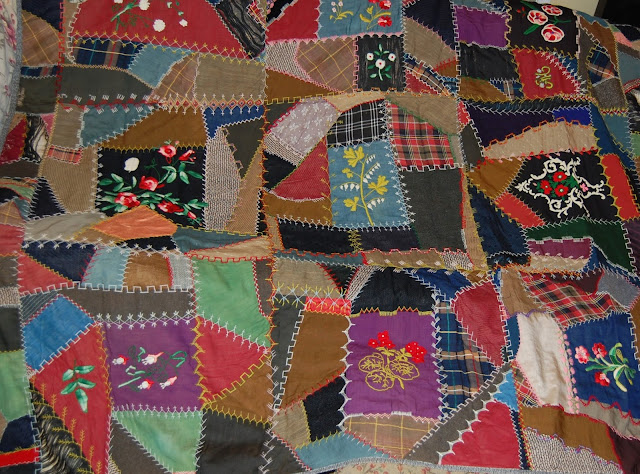 Crazy Quilt from the early 20th century
A quilting friend recently told me that she had no use for crazy quilts.  "They're too chaotic."  I'm not sure if her opinion reflected the wild times we live in or just a personal preference.  But it got me to thinking...
On Monday I wrote about Marie Webster and the first quilt revival of the 20th century.
But I also have this 1882 article I found, that appears to signal another revival:

"Patchwork Quilts Again" the headline read and discussed how ladies were busily making quilts again.  I suspect the ladies made crazy quilts, a big fad at this time.
I had noticed ads for quilts throughout the 19th century.  One of the most popular quilts sold were Marseille Quilts and you can read about them here.  Ads for these quilts appeared here and in England in the first half of the 19th century.
Dry good stores also sold quilts in the later half of the century.  Here is an ad from 1880, Lancaster, PA: 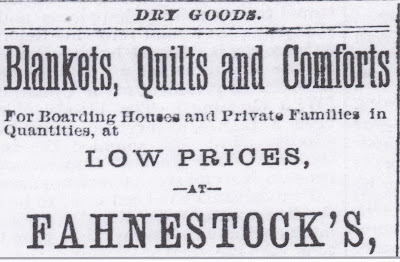 So who was making quilts at "low prices?"  An 1885 article published in Louisiana provided the clue.
"A Novel Industry"  the headline read.  "Over Seven Hundred Thousand Bed Quilts Manufactured Last Year in One Connecticut Village."  Although the article doesn't mention the actual name of the company, it is mostly like the Palmer Brothers Company.
One of the things I love about this article is that it actually relays the progression of the company.  According to the article, local farm housewives originally made the textiles sold by the company.  The wives were grateful for a supplemental income to their homes and "worked between twelve o'clock dinner and 6 o'clock tea, as well as the hours of long winter evenings." 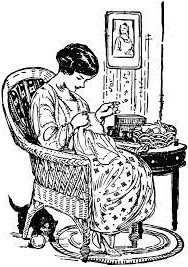 As was often the case during the Industrial Revolution, soon machines replaced the hand work.  Instead of peddling the quilts, the Palmer boys began shipping their quilts to stores.  Farm women no longer worked for Palmer.  Instead they employed three boys and a number of girls.  The girls made 2 1/2 cents for each quilt.  "Some of these girls," the article stated, "make $7.00 a week."  That's roughly equivalent to $204 dollars today but I couldn't find any data on how many girls earned that sum.  Does a few equate two workers and how often did that occur?  If I sound suspicious it's only because so often factories skewed the realities of child labor. 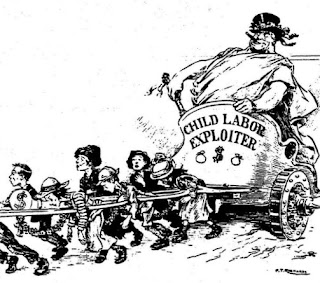 1912 cartoon
There were different grades of batting which dictated the price of the product:
"There are three grades of quilt fillings.  The cheapest quilt is given a filling of shoddy, which is prepared at a cost of ten cents a pound, while pure wool costs fifty.  The better grades of quilt are filled with common cotton, and those of the best grade are filled with carded cotton.  These are lighter, cleaner and bring a high price.  Shoddy filled quilts retail at about seventy-five cents each, those made with ordinary cotton at from $1.50 to $2.00, while carden cotton quilts bring $2.50 and upward."

The Palmer Brothers continued to manufacture well into the 20th century.  An ad from 1915 relays:

So the highest price "Palmer Quilt" in 1915 was $3.50.  According to two different Inflation Calculators, the equivalent today would be $91.14.  It sounds outrageous, right?   Measure that against the cost of calico--I found an ad from 1914 for calico at 4 1/2 cents a yard. So a queen sized quilt of 12 yards of fabric would be just over $5 and that doesn't include batting and thread.
One 1932 ad for a Palmer Quilt shows an image and it appears that pre-printed calico (formerly referred to as cheater cloth) was used:

The sale price would be equivalent to about $32 dollars today.
The Palmer Brothers did end up going out of business in 1949 and I found some interesting articles here , here, and here.
Did crazy quilting save our handwork in the late 19th century?  I think not.  Barb G, a famous Pennsylvania quilt historian often has remarked that the Pennsylvania Germans had money to buy fabric and when we look at Pennsylvania German quilts we find lots of examples of traditional patterns used by them during the same time that crazy quilts were made. 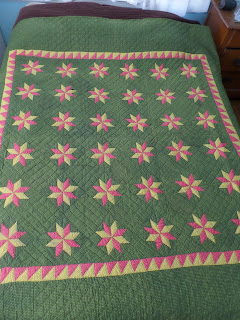 Kemmerer quilt, last quarter 19th century.
Additionally, the Ladies Art Company was established in 1889.  The company sold quilt patterns that could bring all different kinds of patterns to one's mailbox like this carpenter's square quilt made in the last quarter of the 19th century. 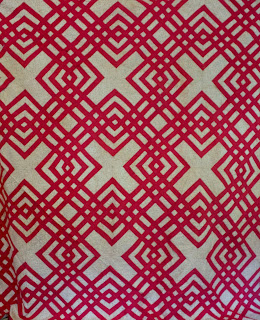 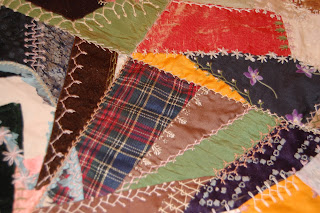 Still, crazy quilts put needles in the hands of lots of women who might have not considered hand sewing at the time.  Even though "crazies" are often tied and not quilted, the style provides a unique and interesting aspect of our history.
Have a safe and happy day!

Posted by Michele McLaughlin at 7:04 AM