Herbert Hoover became president in 1929.  He had worked in two previous administrations as Secretary of Commerce and was credited with saving Europe during World War I because of his relief program. 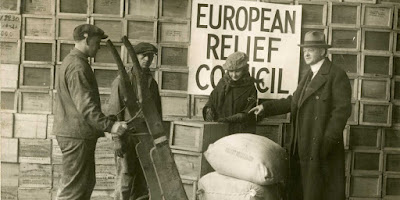 Hoover was nicknamed "The Great Humanitarian."   In particular, Belguim benefited from this program and an interesting article on feedsacks used by the women there can be found here and is very moving.  I remember somewhere in my stack of antique magazines Needlecraft magazines had an article on the reuse of the feedsacks and the gratitude of Belgians.

In 1928, Hoover wasn't just popular--he won the presidency in a landslide against Al Smith.  One of my quilts, dated 1929, appears to display Hoover's popularity: 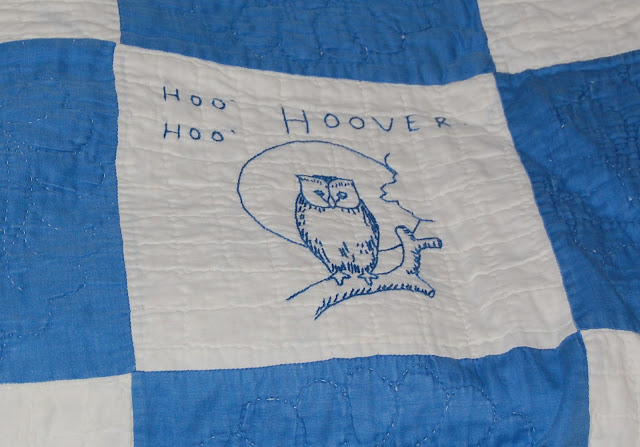 It was during Hoover's work as a cabinet member that our quilt story begins.  In 1928, Needlecraft Magazine published an article on Mrs. Hoover's Quilt: 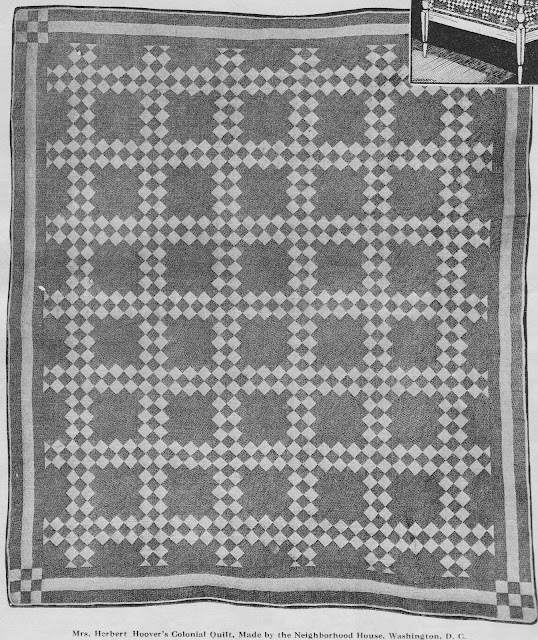 You may recognize this as a double Irish chain.  Somewhere in the back of my brain, I remember when I first studied quilt history that I read the Irish Chain was among the earliest quilt patterns recorded.  Apparently Mrs. Hoover had seen an antique version of the quilt and was so charmed by the pattern that she commissioned a quilt to be made for her son's wedding in 1925.  It was a two color quilt and Mrs. Hoover chose blue and white. Even the quilting of the piece made headlines:

In March of 1929, when Hoover took office, "Mrs. Hoover's Colonial Quilt" made news again, along with instructions; the article encouraged the use of feedsacks.  A month after the inauguration, Mrs. Hoover received a quilt gift as First Lady: 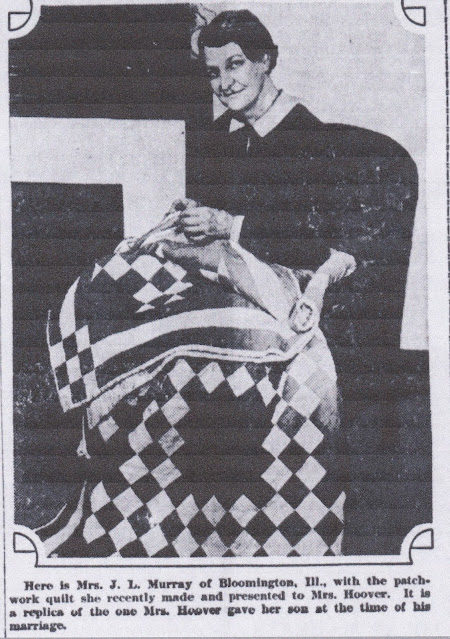 The quilt recreated the wedding gift Mrs. Hoover had presented to her son and daughter-in-law and was made by Mrs. J. L. Murray of Illinois (pictured above).  Sixteen flour sacks were used in the quilt.  The flour sacks were less of an homage to Hoover's work with European relief and more reflective of the maker.  For ten years, Mrs. Murray had been teaching women how to make things from feedsacks.  She recycled so much that she was sometimes referred to as "the shirt tail lady" because of the "unique things she made out of men's old shirts" during World War I.  This quilt was even featured in an exhibit at Winthrop College; the show theme was how to reuse "cotton sacks" and the "Hoover Quilt" was the big draw.
Reusing feedsacks for this quilt was even discussed in later articles.  In an article entitled "Mrs. Hoover Quilt" the newspaper in Indiana offered this advice on October 4, 1929:
"The first step is to rip the bags and remove the stamping by soaking it in kerosene or covering it with lard overnight and then washing the goods in warm water.  Then dye six of the pieces of material a deep shade of blue, what is commonly known as yale blue."

President Hoover apparently did favor the reuse of feedsacks and that would have been in keeping with the war effort when he was heading up the European Relief effort.  One article published in 1932 indicated that a "Hoover Quilt" made during world war times from flour sacks had "won recognition from President Hoover because of its inexpensiveness."
Meanwhile, quilters around the country made "Hoover" quilts.  In East Texas (now Lower Macungie Township), Pennsylvania, a quilting party was held in late March and a Hoover quilt of blue and white was completed.  By 1930, "Hoover Quilts" were even advertised for sale like this one in Vermont:

In Iowa, a 1930 quilt show exhibited a Hoover Quilt made of white and "sea green peter pan*, elaborately quilted and an exact replica of one which Mrs. E. J. Hadley and Miss Worrall quilted for the present mistress of the white House.  The Hoover quilt was of yellow and white and was made on the order of Mrs. G.  C. Hoover of Washington, D.C., whose husband is a cousin of the President, and it was a gift for the First Lady of the Land."
Of course at this point, I had to laugh because I wondered if the White House was inundated with Irish Chain quilts but apparently other quilts were gifted to the first lady as well.  A man named Corp. George Hamilton completed a quilt for the First Lady.  The newspaper reported in July of 1930 that the former service man "has been unable to obtain employement to support his wife and three children since Christmas and took this means to occupy his time."  Hamilton accepted donations of $1 to have donors name included on the quilt:
"Where a town sends in 25 or more names, the name of the town will head the list and several towns have already reached their quota."
The quilt was not in the Hoover pattern but had "four large butterflies in each corner and a large rose in the center with the leaves drooping over the rest of the quilt."
Another quilt of note was this one which was featured in a newspaper account of Salem, Oregon: 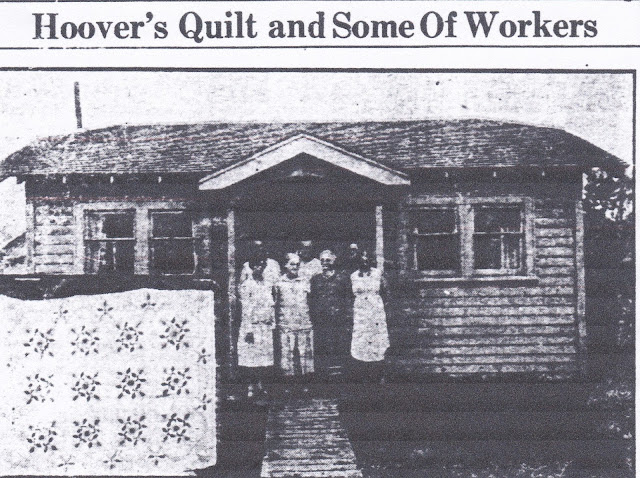 The Highland Friends' missionary society were pictured in 1929 on the porch of a building they had secured with quilts they sold.  The house stood on the ground where "years ago a barn in which Hoover slept as a boy."  The quilt featured in the photo was sent to Hoover.
Other quilts were gifted to Hoover and often we don't know what pattern was featured.  In Michigan, a 1930 article cited "Citizens of Michigan plan to present to President Hoover a quilt.  Considering the weather, they must all be democrats."  It was an extremely hot August in that part of the country. 😅
Surprisingly enough, I only have one Irish Chain quilt in my collection and I believe it may have been completed during the 1930s (the colors are solid so it is more difficult to discern): 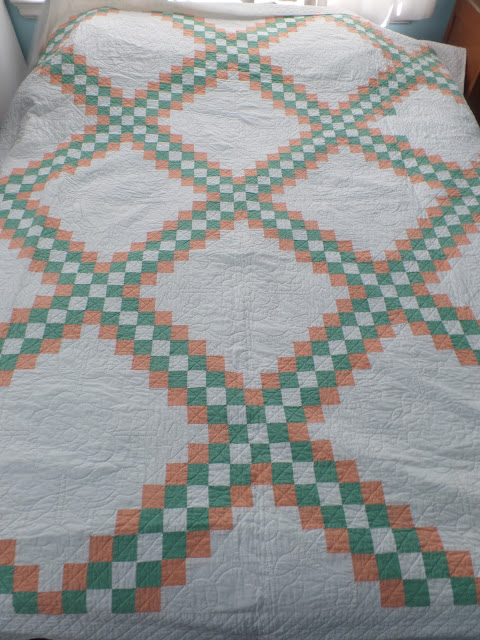 It is a double Irish Chain but has two colors.  The green color is more of what I call a sea green but I don't know what the color was called at that time.
I've never even made an Irish Chain quilt but it is on my 'someday' list.  I like the look of the single Irish Chain.
*Peter Pan was a fabric manufacturer at the time.  You can see a green sample here.
Have a safe and happy day!

Posted by Michele McLaughlin at 7:54 AM