First off, thank you Libby for emailing some photos of your Rainbow Scrap Challenge quilts!  Libby's Chandelier quilt, love the background!!! 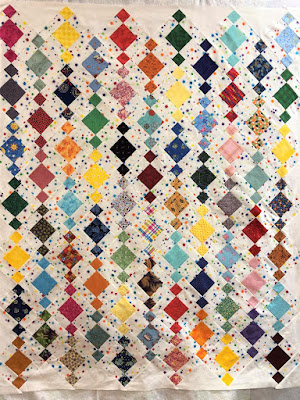 Another rainbow quilt Libby has been working on is this one; the pattern is shown below.  It is called Purple Haze, love the background in this one too, it  gives it so much movement! 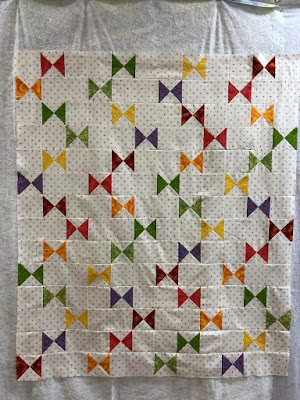 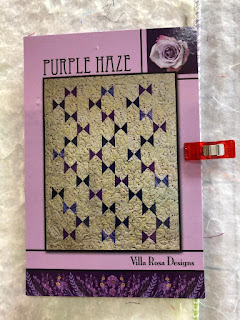 So let's talk about Puss-In-The-Corner!
Yesterday I mentioned it was an easy pattern that I remember using early on in my quilting.  It was so long ago that I don't even have photos of it (it was before the digital age).  But I do know that some of our readers are beginning quilters and I found a tutorial if you want to make one here.
But names of quilts are problematic and I tried to point that out last week when we were discussing Barbara Brackman's amazing contribution to our field.  I found some old newspaper articles on "Puss-In-The-Corner" and thought I would show you what they look like!
From the Kansas City Star, 1930: 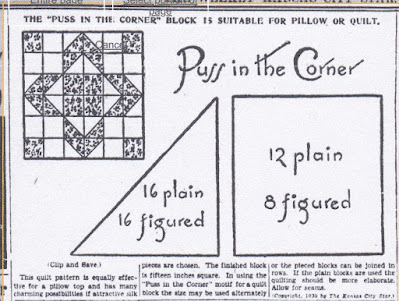 This is the same pattern, published in The Birmingham News in 1940.  But on this, the writer (Florence La Ganke for the Nancy Page Club) suggested that the square blocks were the pussycats: 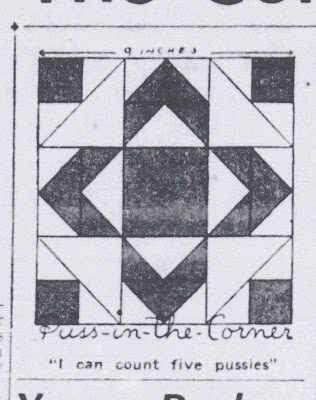 I actually think that it would be fun to make this with a tiny scaled kitten fabric for the squares.
This pattern below surprised me.  It was published in 1934 in the the Daily News (NY).  I don't know that I've ever seen it in a quilt.  My interest is actually on how they assembled the quilt.

If memory serves me correctly, many 19th century quilts with an odd block like that actually used applique sewing on the block and not pieced.  It's an interesting lay-out and I've been speculating about this the last few days.
So of course I did a net search to see what I could find.
Check out this Greek Cross Plus Puss Quilt posting here.
And then, just because I thought it was cute, I found this very literal cat quilt and I thought it was adorable and worth sharing--although the boy with the gun was a little disconcerting. 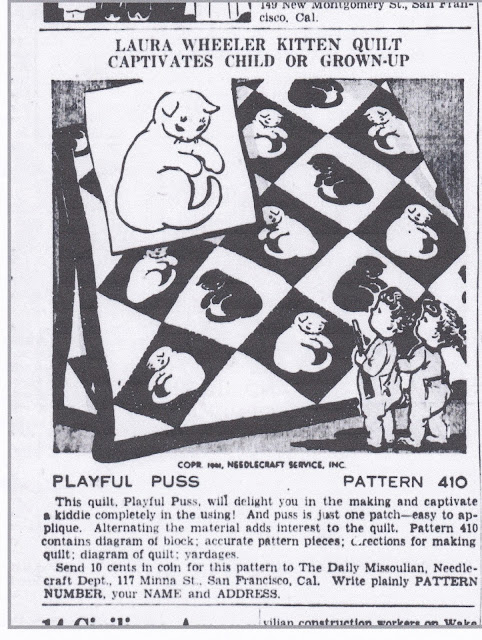 Posted by Michele McLaughlin at 4:58 AM