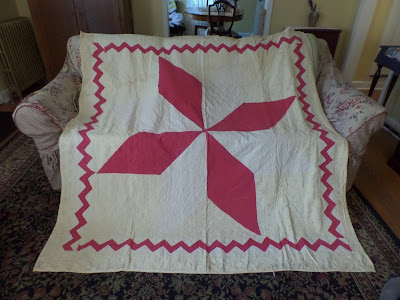 In the 1890s, banks bought some of the textile mills.  By the 1900s, people who sewed rarely bought calico because it was thin and didn't hold up to wear.
This quilt is a great example of what happened.  I initially bought it because I thought it was unusual.  I bought it online.  One of my kids had a long hallway and were looking for some unusual pieces to hang.  I thought it would be perfect and unique.  By the way, the piece was less than $30 and when I received it, I realized why.
The fabric was so thin that it felt like batiste.  One couldn't see it on the photos but it was actually a large Lemoyne Star.  The diamonds alternate to the red ones  were completely eroded.
You can barely make out the white blades alternating the red blades.  The yellow fabric that had once been the background had faded to a beige.  At the seams I saw that it was initially a bright yellow background--much in keeping with the vivid colors that the Pennsylvania Dutch gravitated towards. 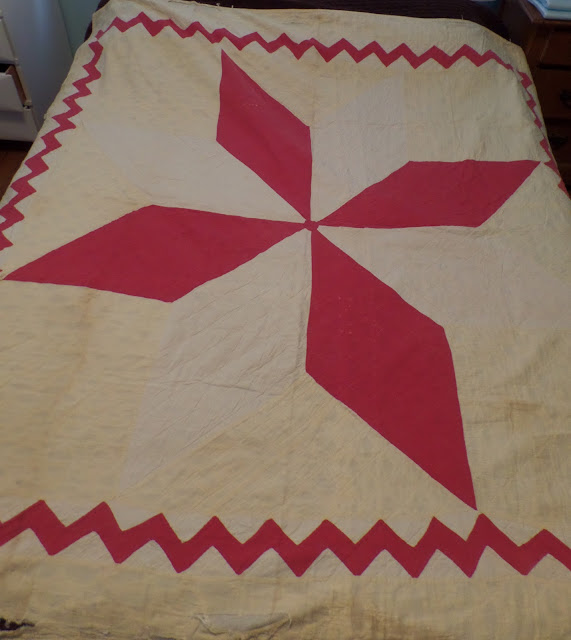 I still love the piece because of the rick-rack style border and it's unique qualities.  Unfortunately, it's too fragile to hang but it IS another piece of our history as quilters.

Posted by Michele McLaughlin at 6:30 AM