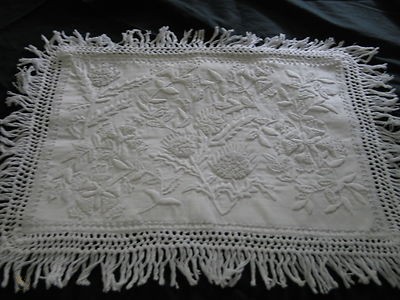 Mountmellick embroidery is a white on white type of embroidery.  It is heavily embroidered and the stitches used create an amazing texture.  It is believed to have been created by Johanna Carter in 1825.  It is considered to be one of the few needleart techniques that originated from Ireland. 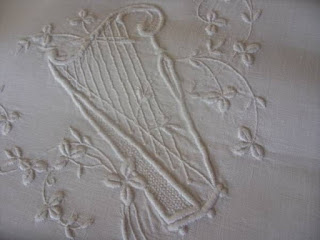 When the Great Irish Famine broke out in 1845, Quaker communities set up food kitchens throughout Ireland.    One million people starved to death in just 1845-1851.  It has been estimated the population declined for the next century.  The Irish were treated so badly that Tony Blair formally apologized to the Irish in 1997. 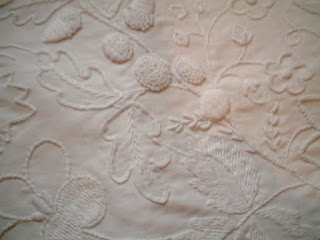 In 1880, a Quaker woman named Mrs. Millner created  The Industrial Society of Mountemellick for Distressed Gentlewoman.  She taught and  employed local women the embroidery technique--in a southern Irish town called Mountmellick.  Only 10 years later, 50 local women were employed by the society.  The embroidery and the technique remained popular until World War 1.

When President Kennedy visited Ireland in 1963, he was welcomed with gifts including a Mountmellick bedspread.  I couldn't find a photo of that exchange but thought you might like to see at least one example: 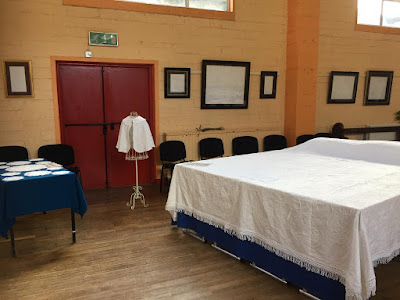 Tomorrow is Flower Friday and if you have a floral image, textile, or actual flower you wish to share, email me at allentownquilter@gmail.com

Posted by Michele McLaughlin at 5:25 AM