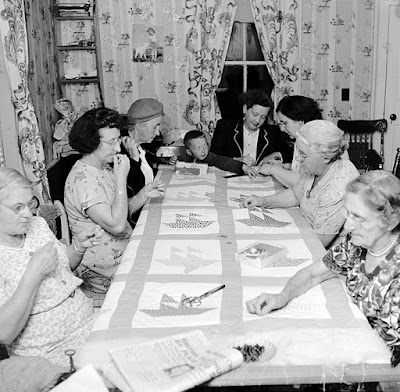 A 1950 photograph of women quilting published in Collier's magazine.
The thing about history is that nothing is ever as black and white as it might seem.  In quilt history, we learn that during the 1950s and 60s, quilting wasn't as popular as it had been during previous decades.  But  quilting didn't die.  It just changed.  There were less free quilt patterns published in newspapers.  It is likely that the commercial aspect of quilting had changed.  I have a ton of thin pattern books from the 1960s that were sometimes advertised in newspapers: 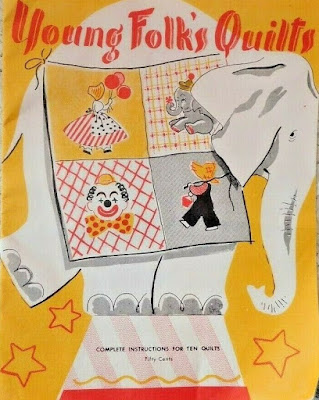 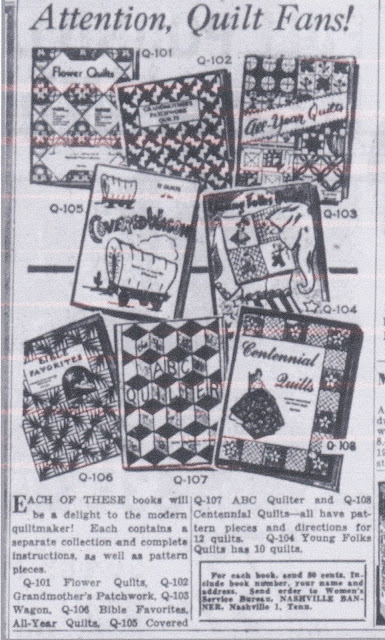 The country changed after the war and society became more consumer oriented.  In part, this may have been due to FDR.  During the war, he had held secret meetings about the country's economy and what could be done to prevent another post-war Depression.
Eisenhower's Infrastructure Plan didn't hurt either.  In that 10 year plan, our interstate highways were built and helped to insure not only the safe travel of citizens, but employment as roads, tunnels, and bridges were constructed.
But quilting didn't die out.  It just changed.  As one article in The San Francisco Examiner pointed out in 1957:
"...today hand quilting has all but died out as a form of needlecraft, being practiced only in a few rural sections and by scattered church groups."
Quilting articles from the 1950s through to the early 1970s have a one large theme:  Church Ladies. 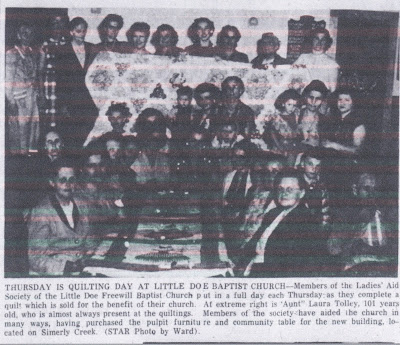 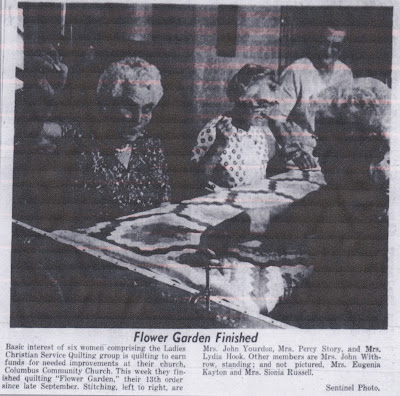 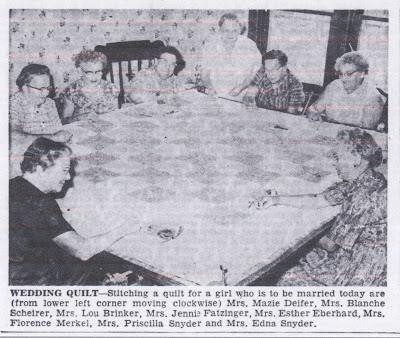 Fullerton, PA: 1959.  These ladies moved out of the church basement when it became too damp and cold to work and set up in a member's home.
The church ladies created their own pieces and could be hired to quilt tops.  The money then went to support the church and often they met weekly or bi-weekly.  It was a good moneymaker for the churches and often a great social event as women chatted around the frame.
When my parents married in the 1950s, the first thing my grandmother did was to commission a church group to quilt an all white bride's quilt.   My parents had it on their bed for decades until it finally wore-out.  To this day, my mother swears that the heavily quilted piece was the warmest quilt she ever slept under.
And then flash forward to the Bicentennial. 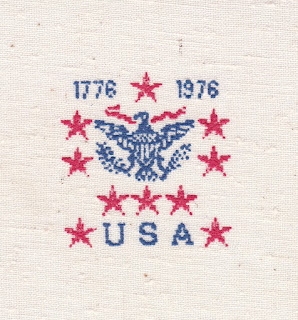 Close-up of a piece of fabric from my collection commemorating the Bicentennial.
In 1976, our local paper published an article on the Church Ladies again but oh how it had changed!  First of all, the piece was a full page and then some; the contents indicated how popular quilts had become.
"Quilting circles in the Lehigh Valley aren't looking for business," the article began.  "They're blanketed with orders."
Of interest is the fact that the ladies were so busy that they were only quilted finished tops that customers supplied.  As one woman remarked:  "You'll have to look a long way before you'll find a church that still makes the entire quilt."  Wait lists could be as long as year and customers at many of the churches were only allowed to supply three tops per their turn.  "The costs for quilting isn't as bad as the wait to have it done," one customer stated.
There was one other change reported by the newspaper and gradually indicated in articles in the late 1960s:  quilting classes.  Often the classes were taught at local YWCAs or other community groups.  By the 1970s, the classes were also being taught at local community colleges (many of you may have even taken them there).
Church ladies' quilting groups were certainly one factor that kept quilting alive during the decades before the Bicentennial.  Hats off to the many Church Ladies that kept our beloved craft going!
Have a safe and happy day!

Posted by Michele McLaughlin at 5:56 AM

Email ThisBlogThis!Share to TwitterShare to FacebookShare to Pinterest
Labels: The Church Ladies