No Flag Quilt for Grace

Grace Goodhue Coolidge was the wife of our 30th President, Calvin Coolidge, aka "Silent Cal".

Grace Coolidge was an interesting woman.  She was college educated and taught at the Clarke School for the Deaf before her marriage.  I like any woman who had such an outgoing personality that she was nicknamed "Sunshine" by the Secret Service.  Grace was also known for her sewing, crocheting and knitting skills.

"Every girl should be taught to sew, not merely for the sake of making something but as an accomplishment which may prove a stabilizer in time of perplexity or distress." she once wrote.  "Many a time when I have needed to hold myself firmly, I have taken my needle, it might be a sewing needle, some knitting needles, or a crochet hook; whatever its form or purpose it often proved to be as the needle of the compass, keeping me to the course.

After her son passed in 1924, she comforted herself by crocheting a coverlet for the Lincoln bed in the White House: 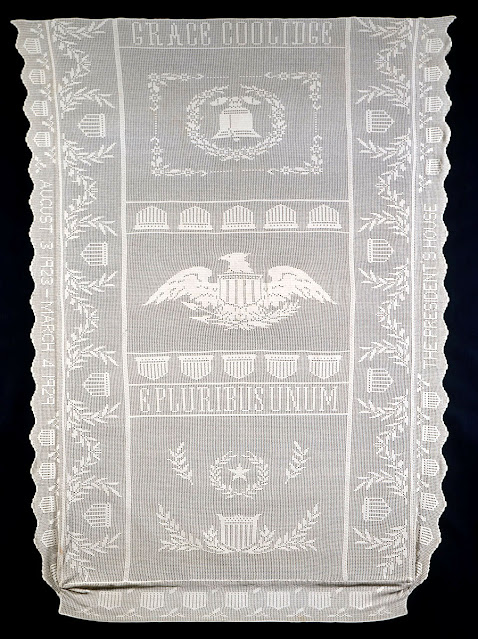 However, Grace had a strong sense of decorum and her position as First Lady.  In 1925, a newspaper article was published about her and a request from a group of quilters:
"Mrs. Coolidge does not intend to become a party to anything she interprets as misue of the American Flag," the article reported.  "The story came from White Court today that a group of Middle-Western women sent in a quilt on which a large flag was embroidered and asked her to autograph it so it could be sold at auction.  She did not consider a bed quilt an appropriate place for the emblem and returned it without her signature.
Finally when the women sent her a plain white quilt she affixed her name."
Images of the flag offer appear on quilts.  I have two quilts that have flags embroidered on them.  This one is a Ruby McKim pattern: 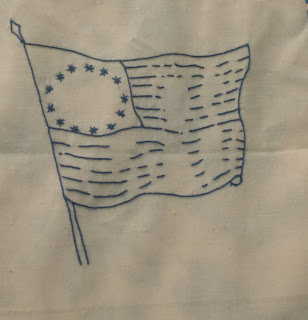 Another striking example is a Red Cross quilt from Ken Burns' collection that you can see here.
Still Mrs. Coolidge stuck to her position and that has to be admired.  The American flag holds different meanings to individuals.  I remember my father once telling me about when he was a little boy and played marbles with his friends (my father was a champion marble player).  My guess is this occurred shortly after the United States entered World War 2. The story also reveals the speculation and thoughts of these youngsters as the processed what was happening in their world:
"Could you ever shoot anyone with a gun?" asked one boy.
"No, I couldn't do that."   The boys agreed on that point.
"What if someone spit on The Flag?"  The question changed the tone of the conversation.
"Well that's different.   We'd have to shoot 'em then." 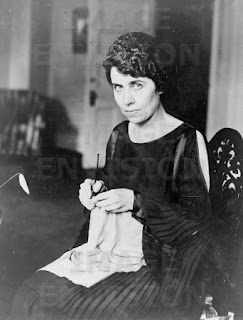 Mrs. Coolidge knitting.
From all accounts, Mrs. Coolidge was a fascinating woman and I'd like to read more about her.  She was a lousy cook, an animal lover, and an avid baseball fan--so much so that she was referred to as The First Lady of Baseball.  A great post about her and her courtship with Coolidge can be found here.  Enjoy!
Have a safe and happy day!

Posted by Michele McLaughlin at 4:22 AM