The Fort Worth Star Quilt Contest: 1931

Through the 1930s, quilt contest were held frequently and were often sponsored by a local newspaper.  The contest provided interesting prizes during The Depression and often (but not always) required the participants be subscribers to the sponsoring newspaper.

In 1931, The Fort Worth Star-Telegram coupled with the Leonard Brothers department store held a big quilt contest.  This particular contest also featured Ruby McKim's Farm Life Quilt.  The pattern had been offered for free in the newspaper throughout 1930 and part of 1931 and it had a special category in the competition. 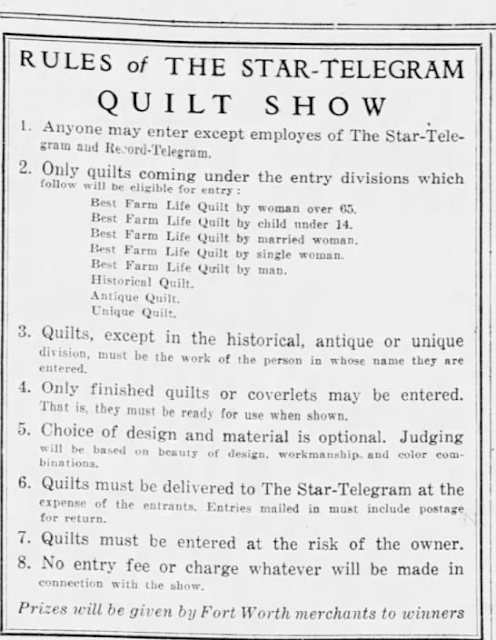 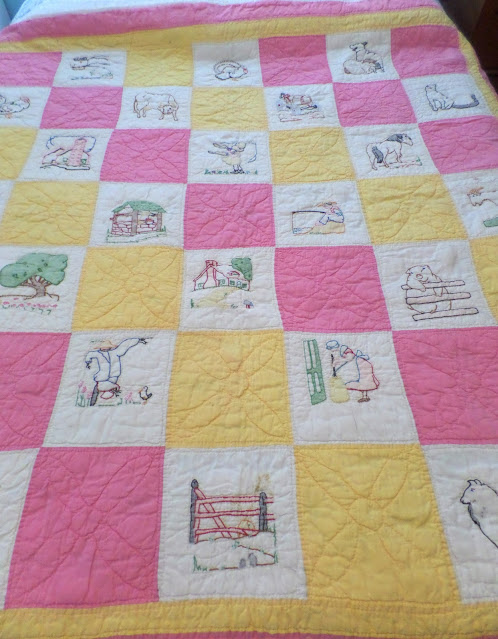 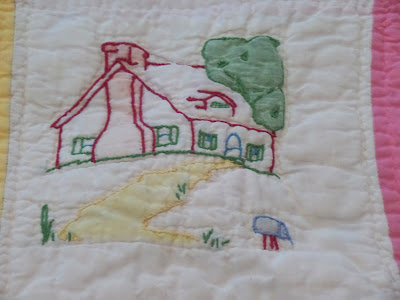 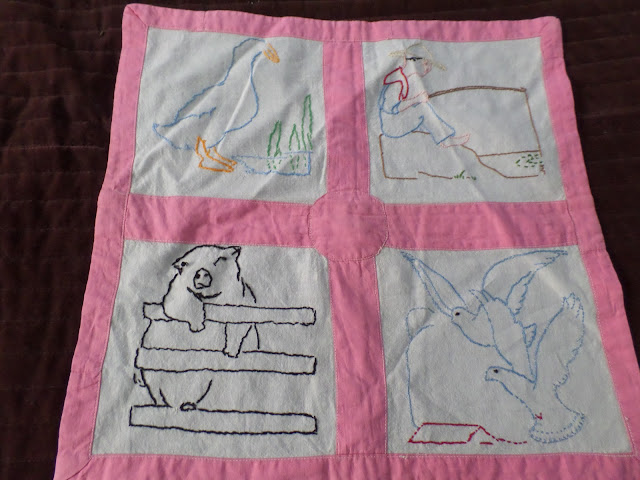 Farm Life quilt and doll quilt from my collection.
Prizes included a sweater, a purse, and even 6 one gallon containers for syrup.  All the prizes were donated by local merchants.  You had to be a married woman for the big prize of a stove and a woman had to be over 65 to compete for the Frigidaire. 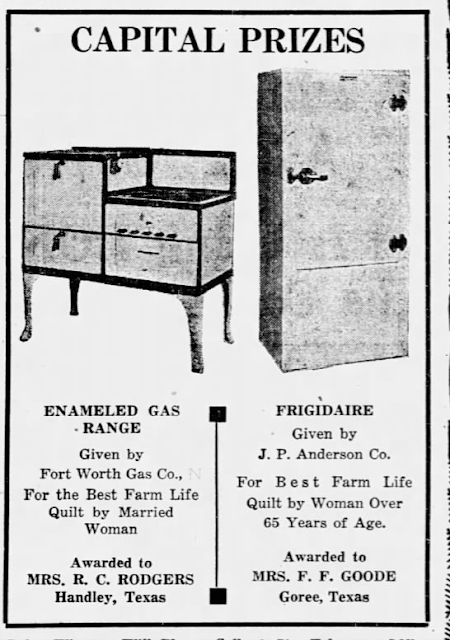 One of the most interesting prizes was...yup, a pony! 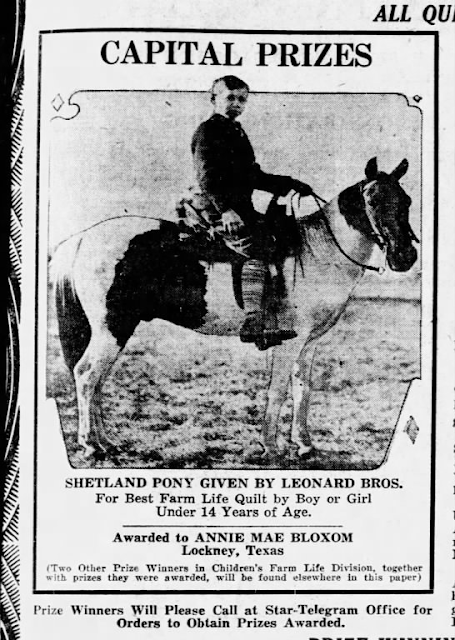 Some of the entries sound really interesting.  For example one quilt featured well known brands used on cows.
Historical quilts included heirlooms passed along in the families like this star quilt: 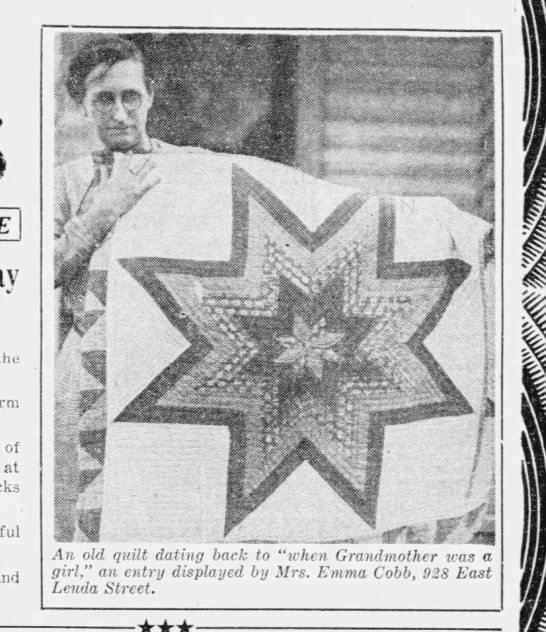 Men were encouraged to participate and...did! 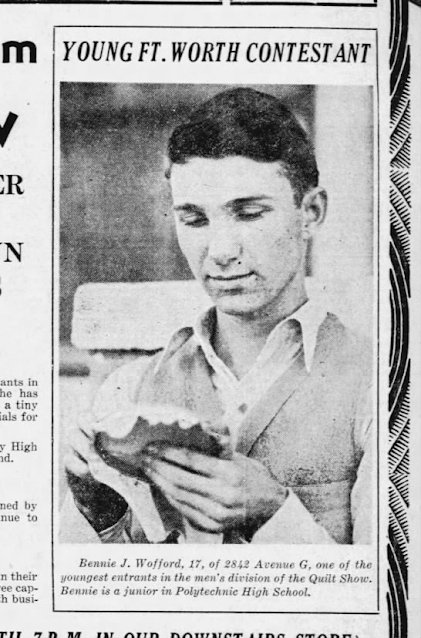 The contest also encouraged some people to begin to sew like Miss Madden.  I just wish she looked more thrilled by here work: 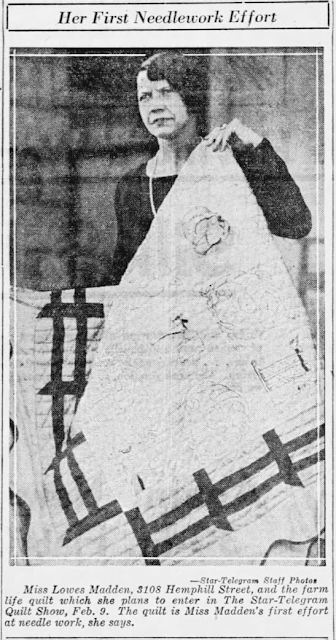 One of the interesting submissions were two "dream quilts" submitted by 55 year old Mrs. Plumlee.  Apparently this was a unique creation by the quilter.  According to the newspaper, "their brilliant blocks (were) stitched with songs, poems, old sayings and scenes of travel."  Each quilt consisted of 25 blocks and included embroidered rosebuds in the square as well.
At one point, it was reported that there were 535 submissions and the show itself (free to the public) was a great success.  Contests like this one were frequently held throughout different parts of the United States.  Many of them featured a specific quilt pattern like Farm Life or other patterns offered for free in newspapers. 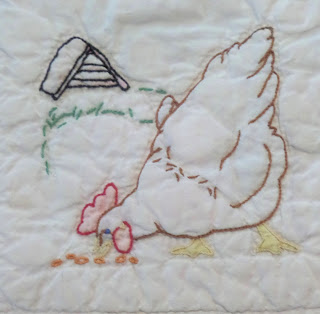 Don't you wish that more contests like this were held today?
Wishing you a safe and happy day!
Posted by Michele McLaughlin at 4:27 AM