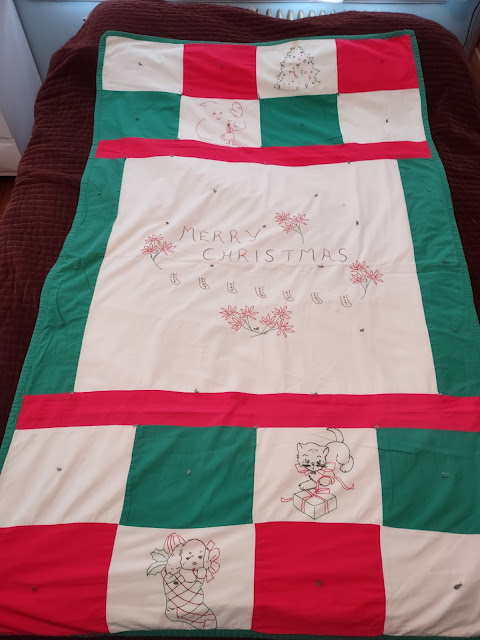 The Merry Christmas Coverlet is from the late 1950s/early 1960s.  It is tied and doesn't have batting.  One doesn't see many Christmas quilts so I bought it locally.  d

I like the large panel that shares the names of the family on the stockings: 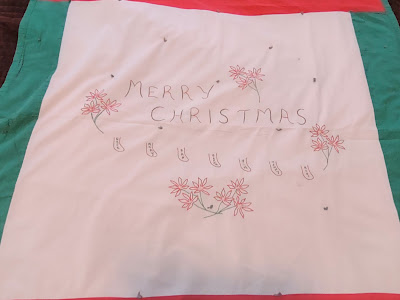 At the time, I thought the images might have come from a coloring book.  It was only a few years ago that I found that I actually owned the embroidery transfer packet that held the motifs.  A "duh" moment but then I have a lot of transfers.  So do you think I could find the envelope for this post?  No!  I might have given it to a friend along the way.  The colors and the motifs are very indicative of the time. 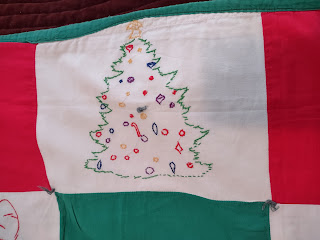 This is exactly what Christmas trees looked like when I was a kid.  Chubby and full of bright ornaments. 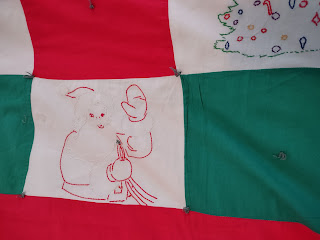 Santa doesn't show up well because he has so much white embroidered on his beard and coat. 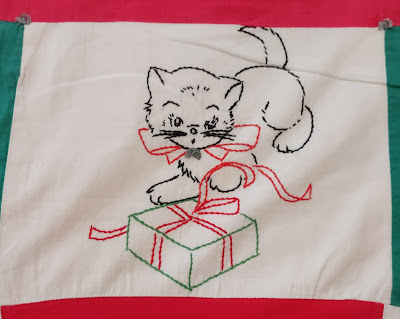 My neighbor has two kittens under a year old and yesterday we chatted on the phone.  "Are the kittens after your tree?"  I asked her.  She said they have not been climbing the tree like her late cat George did when he was a kitten.  Probably the tree was less fun to play with than the kittens have together.  I mean who didn't like torturing playing with their siblings as a child? 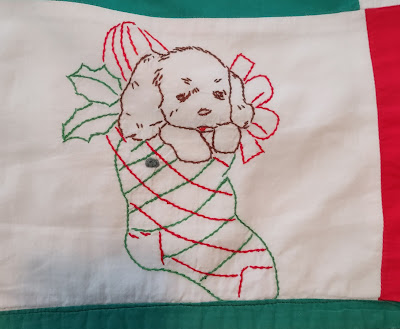 This is my favorite image from the quilt because I love dogs.  Unfortunately this is also how my dog looks today.  She injured her leg earlier in the week.  The leg is doing better but the vet suggested x-raying her hip and leg while she was under anesthesia yesterday.
Scout had a cracked tooth (never had that problem with our dogs before) and it was already scheduled to be extracted yesterday.  To make a long story short, the tooth was a bugger to get out and she had to have extra anesthesia which has left her groggy even today.
Today I am fussing over her and binding a quilt.  I don't like that she's so under the weather but on the other hand, it's good to have a day to just breathe instead of the Christmas stuff I've been doing.
What are you doing today?  If you want to share ANYTHING for Friendship Friday, email me at allentownquilter@gmail.com!
Have a safe and happy day!

Posted by Michele McLaughlin at 4:06 AM