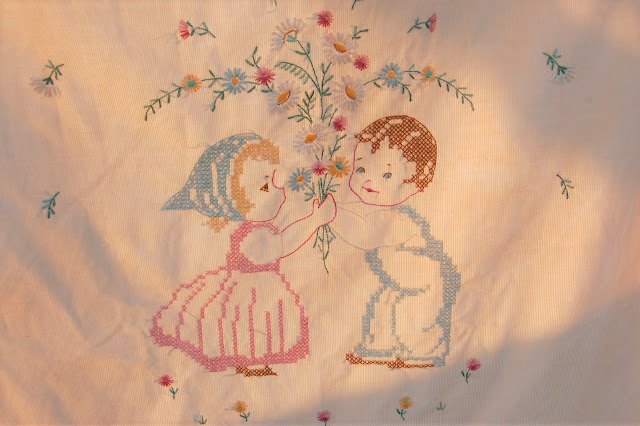 So I have an embroidered blanket in my collection.  The fabric was unusual--it was corduroy!  My friends and I agreed it was a strange choice but probably the maker used an embroidery transfer on the fabric.
I was wrong.  I found a doppelganger on etsy and of course I realize that it was an embroidery kit: 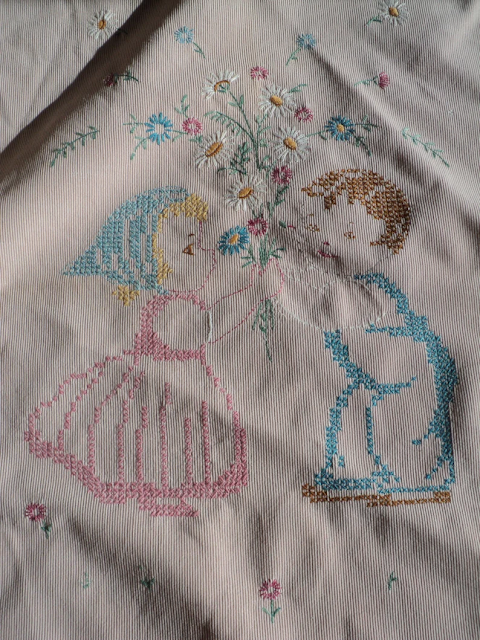 And then I began to hunt for embroidered corduroy blankets.  I wasn't disappointed either: 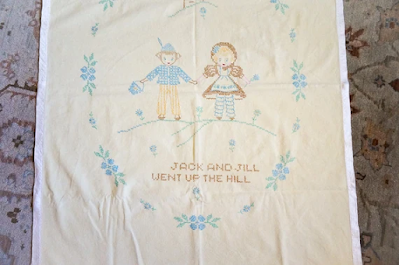 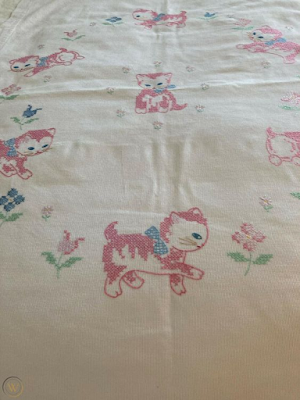 The sellers all indicated that these were from the 1950s or 1960s, so what was the deal with using corduroy?  I was intrigued so I began to hunt for how corduroy was used.
It seemed like pre-WW2, most corduroy featured in ads was in men's clothing, particularly for the linings of work jackets.  But in the 1950s, there were more ads that featured children's clothing made of corduroy: 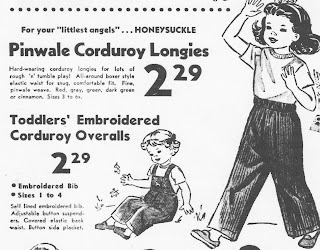 So I asked my friend who used to sell vintage clothing and asked, why did corduroy became popular in the 1950s?  My friend laughed and told me the two magic words:  "Roy Rogers."
Apparently, clothing termed "western wear" really took off in the 1950s and 1960s.  Denim became fashionable and corduroy was used in a variety of fashion from men's suits, children's clothing and even dresses.
For kids, mother's like the durability of corduroy and apparently it became so fashionable that there was even printed corduroy:

1957 ad
Personally, I don't like the feel of velvet or corduroy and as a child I found corduroy annoying.  How you can sneak up when playing tag or hide quietly during hide and seek when your pants make that whishing sound?  Interestingly enough when men's suits were made in corduroy, the fabric was referred to as "poor man's velvet."
So that is all for today!  We finish up Story Time Stitches tomorrow!
Have a safe and happy day!

Posted by Michele McLaughlin at 9:35 AM