This weekend I was browsing through Etsy and admiring vintage and antique quilts.  One set of quilt blocks stopped me dead in my tracks: quilt blocks from a Bridal Quilt.

Those of you who applique may already know the name of Marion Cheever Whiteside Newton.  She was a quilt maker and designer in the 1940s through the 1960s until her untimely death in 1965.  Quilts and even blocks of her designs rarely come up for sale.  I only own one, it depicts Hansel and Greta and was embroidered instead of appliqued: 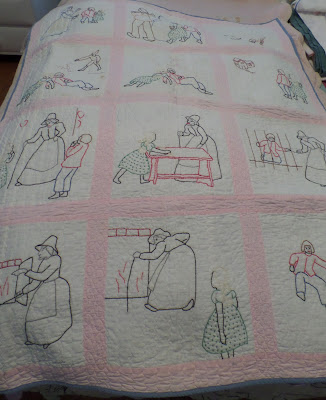 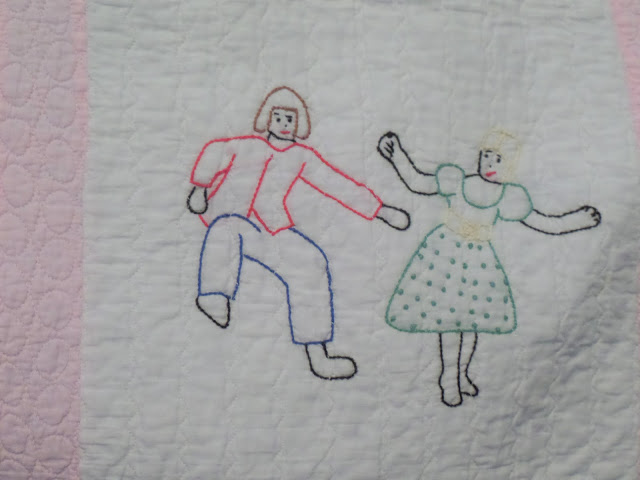 Here is the set I found on Etsy.  It is incomplete but depicts different cultures and how weddings were performed. 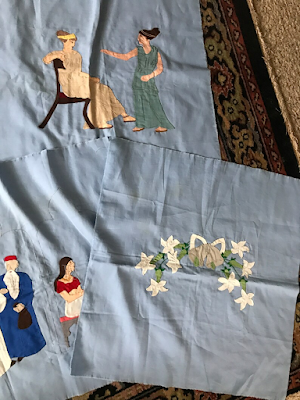 Originally an artist and muralist, Marion studied in the U.S. and Paris.  Marion began her career in quilt making and quilt designing when she made a quilt for her nephew depicting Bible scenes.  Her nephew loved the quilt so much that she started a "cottage industry" from her Manhattan apartment.  She called her company, "Story Book Quilts" and most of the quilts featured children's books and later expanded to other assorted subjects (like the Bridal Quilt and The Football Quilt).

Her quilts were sold in local stores and also local galleries: 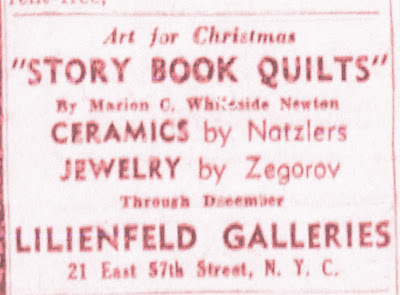 According to a 1946 newspaper article, Marion's clients included Queen Wilhemina of The Netherlands and her daughter Princess Juliana.

During these early days of her business, the company focused on making quilts and prided itself on the uniqueness of each quilt.  Clients were consulted about theme and color.  Marion had quite a few assistants and the quilt blocks were actually made by needlewomen all over the country.  The quilters would submit their blocks to Marion and she would decide if the workmanship met her standards.  By 1948, she had already sold 1,000 quilts.

I'm not sure when she expanded to include quilt patterns but I know her patterns and quilt kits were featured in most of the leading women's magazines.  In all, she designed over 50 different quilts before her death in a car accident in 1965.

Marion's quilt patterns are still sold today.  For more viewing of her fascinating quilts, check out this pinterest site for more works or simply google her name.