Those of you who have seen my Storytime Stiches program are aware of my fondness for women artists and illustrators.  One reason I'm so passionate about this subject is because women were excluded from the fine arts for so many centuries.  Because there is not much available about this particular artist, I wrote an especially lengthy post about her life.  Today is part one.

Probably the most popular suffrage poster was created by Bertha Margaret Boye (1883-1930). 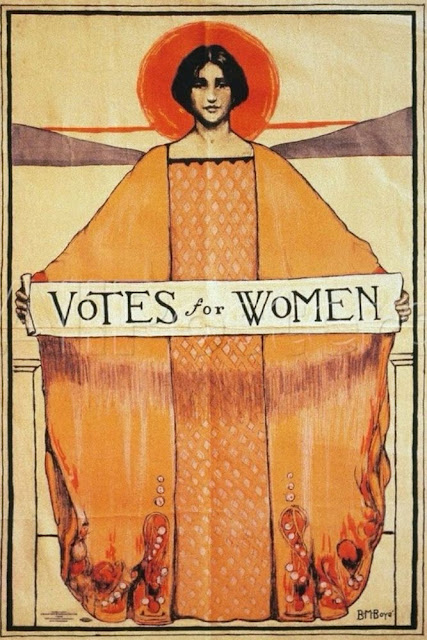 This piece was the winning entry for a California suffrage poster contest in 1911 and part of the successful campaign for women's suffrage in that state.  Berth was born in Oakland, California but grew up primarily in San Francisco.

She was a gifted artist, a bit of a recluse, and most importantly, she knew the value of her work.  I suspect she was one of those  artists who was married to her work.  In college, when the school newspaper chose to publish one of her illustrations, she insisted on being paid $25 for her artwork.  This made headlines in the Oakland Tribune.  Unlike other women artists who were often exploited, Bertha stood firm and understood the value of her work.

A year later in 1906, Bertha was commissioned to do a sculpture H. P. Baldwin a well known businessman in Hawaii.  The drinking fountain, completed in 1907, memorialized Baldwin's late grandson.  Hawaiian newspapers described the fountain as a child holding a cup:  "The design and execution of the fountain are extremeley graceful, the child's contour showing good expression."  Later references to this work indicated that she had received much acclaim in the art world for the piece.  I just wish I could find a photo of it.

Artistic losses occurred for Berths during the San Francisco Earthquake and Fire of 1906 when all her work was lost.  She continued to work after she found a new studio and was a member of the Sketch Club (later renamed the San Francisco Women Artists).  She exhibited frequently with this group and in 1909 illustrated a children's book called Dotty Seaweed.  I've never found a copy of this particular book but shortly afterwards, she did illustrations for a book entitled Jingles for Singles, a romantic and sentimental version of nursery rhymes. 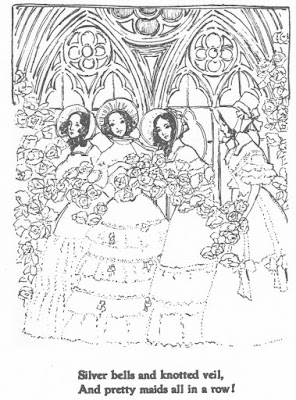 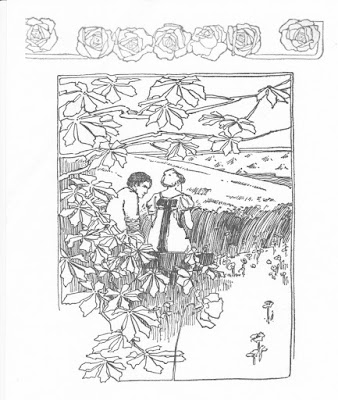 Bertha's work continued to be exhibited and in 1911, her suffrage poster was submitted to the College Suffragists for Design; her piece won the $50 prize and was featured in California department stores along with suffrage flags and Equality Tea.

In the same year, Bertha won another poster contest (and $100) for the San Francisco Fall Fashion show. 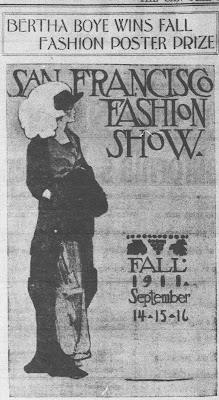 One interesting aspect of this piece is that Bertha had hidden her phone number, 5062, somewhere in the piece.

Her work continued to receive accolades and interest.  In 1912 she travelled to Europe where she studied art and sculpture in Munich, French art academies and even with Anders Zorn, a well known sculptor and artist from Sweden.

By 1919, Bertha had moved to Ukiah, California and set up a studio and private art school.  It was a secluded setting for an artist but she later explained her reasons to a reporter:

"I did things several years ago.  A memorial fountain for a man in Honolulu, some illustrating and I exhibted a few things in San Francisco but after my return from Europe I came here to rest and was charmed by the place and, while Intend doing some work for the public--for I feel the urge to go ahead--I enjoy the prolonged rest, my class of children, my Indian models, and maybe most of all--the privilege to keep my little family of animals thtat I love and enjoy so much in modeling."

Bertha had a special relationship with the local Native American population who also appeared to be very protective of her when outsiders sought to meet her.  A special exhibit of her work was featured at a local residence:  "Miss Bertha Boye's group of Indian figures and a few of her studies of Indian life were shown.  The work all bears the distinct touch of the true artist executed in designs not before made and the work made a tremendous impression on the visitors.  To add to the pleasure of the event Miss Boye was there in person to meet the guest."

A year later, her work was featured in Paris: 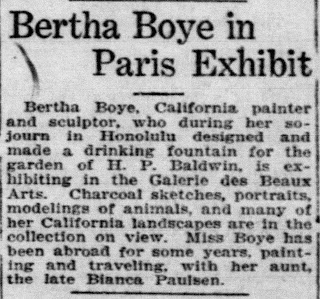 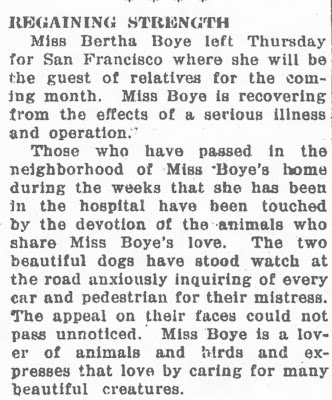 In 1930, Bertha traveled again to Europe to tour and study.  She was in Madrid in April but in September passed away suddenly in France.

Posted by Michele McLaughlin at 11:50 AM

Email ThisBlogThis!Share to TwitterShare to FacebookShare to Pinterest
Labels: B. M. Boye 1