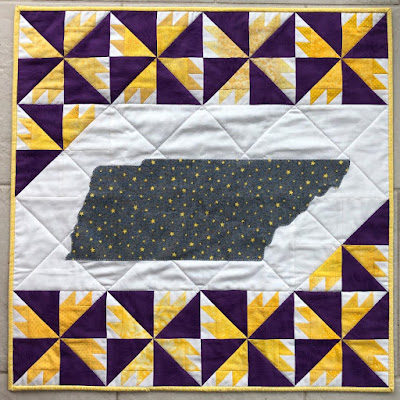 Libby S. from Tennessee made this wonderful tribute for the Suffrage Centennial Quilt Challenge!

Not only does Libby live in the state that gave us the ratification of the 19th Amendment but Libby herself is a distant relative of Elizabeth Cady Stanton, one of the founders of the suffrage movement.  She told me in an email last week that many people in the family carry the Cady name even through to today; Libby's granddaughter has Cady as her middle name.  How cool is that?


STORY BEHIND THE QUILT – Perfect 36 by Libby S


When Tennessee legislators were called back to a special session in August 1920 to vote on ratification of the 19 th amendment, they were greeted by suffragists wearing yellow roses, and opponents wearing red roses.  Thus the “War of the Roses” began.  By a single vote, Tennessee became the required 36 th state to ratify.  Supporters referred to Tennessee as The Perfect 36.  This quilt has 36 yellow rosebuds surrounding the state.

It was a last minute decision on the part of the single vote of young Harry Burns (he was only 24 at the time!) and his dilemma is illustrated in the movie, Iron Jawed Angels and featured in the book, The Woman's Hour: The Great Fight To Win The Vote.  Beth's favorite part of the story is that it was a letter from Harry's mother that actually swayed his vote :)

Thanks Libby, this was a great lesson for today!
Tomorrow we will resume with Mother Goose...
Stay safe and healthy!

Posted by Michele McLaughlin at 7:33 AM