One of the things that some suffrage branches did was have special clubs that women could join.  Embroidery in the early 20th century was still fairly popular (in contrast to quilting which lagged in certain areas and would gain momentum in a few years and explode during the depression).  In San Bernardino, California there was a very active suffrage embroidery club:

Here are some pieces that I found online of suffrage embroidery: 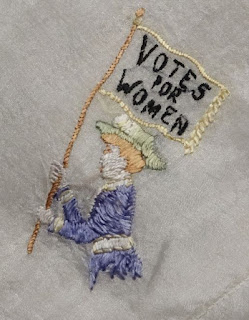 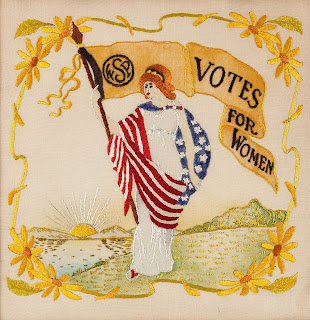 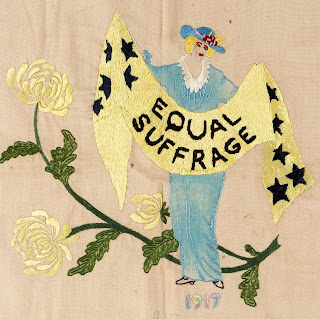 In Britain, one touching piece was made when suffragettes were imprisoned: 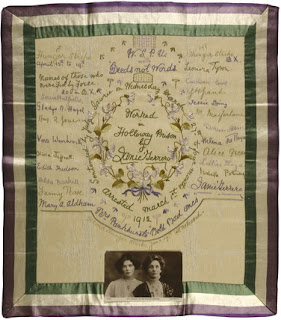 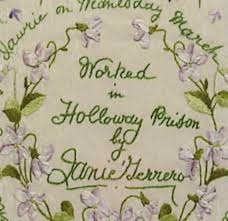 One article that provided an interesting insight was published in Arizona in 1906.  It doesn't provide anything factual about suffrage but it does reveal the writer's dismissive perspective of suffrage meetings.  The article was called "How to Stop Hazing" and called for a halt to hazing at West Point and the Naval Academy.  "The best way to stop hazing is to dismiss the hazed," the writer wrote.  "Let such creatures go to advocating woman's suffrage and discussing embroidery."

I'm working away on quilt blocks that features work the suffragists women did in my home state in 1915.  I was particularly touched when one article relayed that farm women were donating their egg money to suffrage associations.

I know from family tales how important egg money was to a woman.  In dark economic times, the money from the sales helped tide over the family.  During prosperity, the woman had a little cash to buy things like fabric or goodies for her children. I knew of an embroidery pattern I wanted to use for the this aspect of suffrage in 1915.  It's a pattern I had seen somewhere online; I added the ribbon on the bonnet. 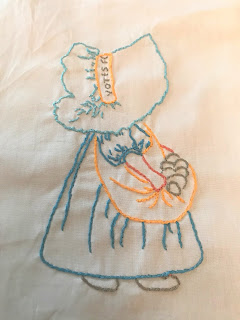 I hope you are staying safe and healthy!  If you have a project (knitting, sewing, or other) that you would like to share with the group, email me photos and a little blurb about what you are doing to Allentownquilter@gmail.com