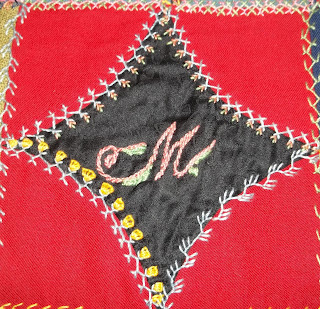 Close-up of a quilt from my collection, dated 1908.

As I've mentioned in previous posts, quilts were often used by suffragists to raise money and awareness for the cause.

In 1912 a quilt was circulated to different suffrage meetings in Kansas.  The quilt was attributed to "Grandma McLain" of Santa Fe, Kansas.  She was a 92 year old suffragist; her  daughter, Clara Colburn, was active in the movement.

No description of the quilt pattern or color was reported. 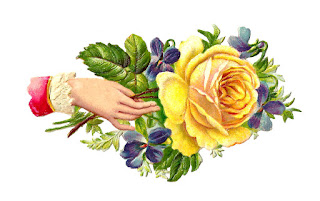 Sarah A. McLain (1821-1913) had nine children, six of whom had passed by 1913.  According to one newspaper report, she had actually pieced the suffrage quilt for the association and the top was sent out to be quilted.

The quilt was "offered to the town who would donate the largest amount to the cause."  The quilt was reportedly sold in Liberal, Kansas in August.

One article reported, "If the voters do their duty at the polls in November, Grandma hopes to be able to vote in the future." 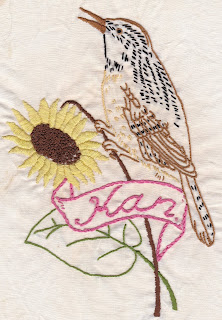 A twentieth century quilt block, recently donated by Pam B.
(Thanks Pam!)

Grandma did get her wish.  The Kansas referendum allowed women the right to vote in November of 1912!

Have a safe and happy day!
Stay healthy!

Posted by Michele McLaughlin at 6:53 AM