I found a number of suffrage sewing groups that you might find of interest.  Some of the articles were very small and just mentioned in passing that "sewing at suffrage headquarters was resumed today.  Daily sessions will be held from 10 a.m. to 5 p.m. " (New York, 1918 and it is possible women were making things for the war effort--as in World War 1).  A pre-war article from Brooklyn simply stated that the "Oceanside Suffrage Sewing Circle meets at Columbia Engine House."

Here is a group I found in my hometown of Allentown PA in 1917: 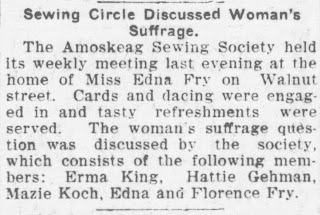 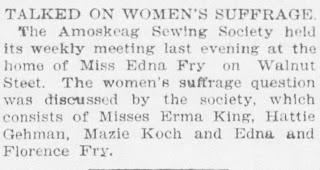 Local readers of this blog may be intrigued as well as why the society was called the "Amoskeag Sewing Society."  I wonder as well!

Amoskeag was a textile mill in New Hampshire and Amoskeag also made machinery.  A variety of sources indicated that Amoskeag made sewing machines.  It's difficult to find an actual old sewing machine brand with Amoskeag on it but I know that at least one of their sewing machines (for shoe makers) featured a name called McKay.   I know a number of women who are fans of the Featherweight and are in groups that celebrate the machine.  Perhaps these women were fans of an Amoskeag sewing machine?

The factory boasted a textile club which gave a variety of lessons and apparently had many members but I'm skeptical that impacted the young women in Allentown PA.

My bet is on the thing that all sewing folk love:  fabric.

Amokseag is most known for textile factories.  During our By the Chimney No More program, we discuss fabric choices during the early twentieth century.  Gingham fabrics were very popular and apparently Amoskeag ginghams were desirable in our town: 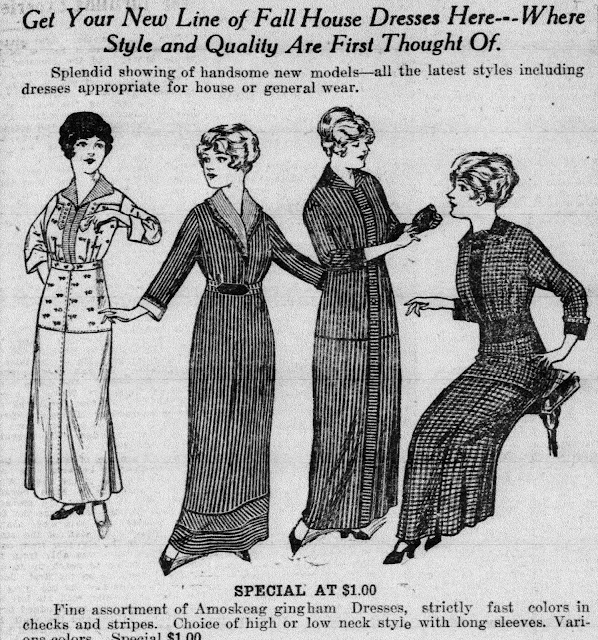 Add for Leh's Department Store above and below, note Amoskeag gingham 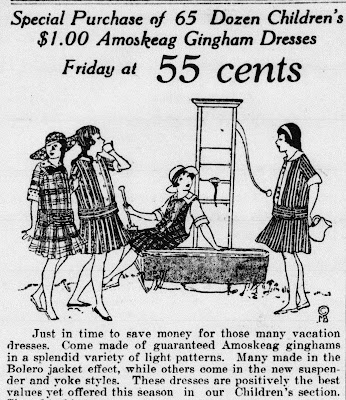 Chambray was also a favored fabric during this time period and was also one of the textiles that Amoskeag produced: 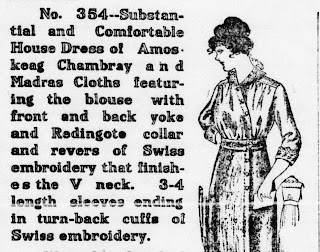 A variety of Amoskeag fabric was sold locally including flannels, seersuckers, and chambrays:

Maybe the women in this sewing circle had a preference to Amoskeag fabric?

I even wondered if the women worked in a textile factory which used Amoskeag machinery but that seems unlikely.  Edna and Florence Fry were well-to-do women; their father owned a large furniture store in town.

Whatever the reason, the young women of this group were interested in suffrage and willing to publicize the cause.

Posted by Michele McLaughlin at 8:52 AM