In 1882, a controversial sale incensed the British press and public:

"There is great lamentation in  juvenile circles just now, for Jumbo, the large African elephant at the Zoological Gardens has been sold to the great showman Barnum, who intends to take him on a starring tour through the United States." (The Graphic, London England February 25, 1882)

Jumbo the elephant would indeed tour with the circus for the next three years.  It was Jumbo's fate that created glory for the pachyderm. 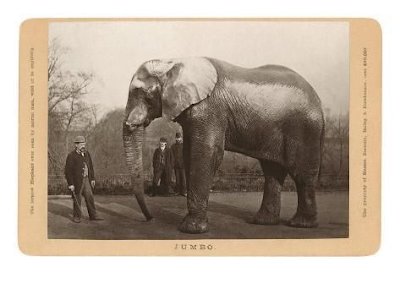 "It seems that after an exhibition at St. Thomas, Ontario, Jumbo's keeper led him and the trick elephant, Tom Thumb, along the railway line to the Circus cars which were on a siding.  The rails there are laid on an embankment ten feet high.  As a freight train was approaching behind them the keeper directed Jumbo to go down the embankment.  Jumbo however, seeing no danger refused to descend..."  (The Standard, London, England September 17, 1885).

Jumbo was hit and crushed to death.  Tom Thumb was also injured and had to be euthanized.

Barnum wasn't only the greatest showman, he was an advertising genius.  The other story circulated was slightly different:

"It appears the noble beast lost his life while trying to save that of his favorite, the baby trick elephant Tom Thumb.  When Jumbo saw the impending danger, which was not until the locomotive was almost upon him, he grasped his littel friend in his trunk and hurled him far out of danger..." (Harrisburg Telegraph, Pennsylvania, September 18, 1885).  Of course Jumbo could not save himself in time and Tom Thumb's injuries from the fall resulted in the decision to euthanize him.

Jumbo was not only a hero but he became immortalized in our redwork quilts.  Most of us who have studied antique quilts have seen this pattern.  It must have been a popular penny square.   There are lots of these "Jumbo" blocks featured on redwork quilts of the turn of the century.  Other children's stories featuring other elephants named Jumbo would also be popular, even through the 1920s. 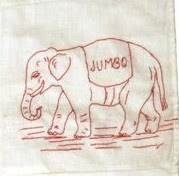 This pattern was offered by the Detroit Free Press in 1937: 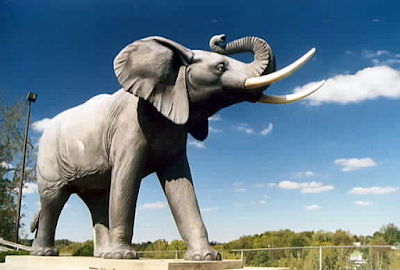 Memorial statue of Jumbo the Elephant in Ontario, Canada
Wishing you a safe and happy day!

Posted by Michele McLaughlin at 9:00 AM