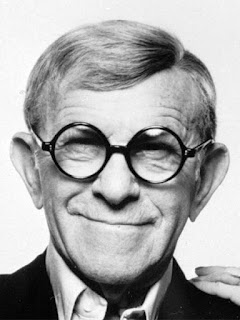 Many many years decades ago, I saw an interview of George Burns.  He discussed how difficult it was after his beloved wife Gracie Allen died.  In particular, he had trouble sleeping at night. Then he discovered that if he slept on Gracie's side of the bed with her pillow, he could fall asleep.  He told this story to help other widows and widowers who experienced insomnia due to grief.
Today is my seventh post on Men Who Quilt and time to think about connections between the many men who quilted.  One connection that I've found is that some of these men quilted while their wives were sick or after they died.  You will see this similar theme in post one and the sixth post.  We can speculate why they chose to sew after their wives passing: maybe the scent of their wives' perfume in the sewing room comforted them.  Perhaps they wanted to continue the legacies their wives had begun in sewing or they needed to do something with what they had available.  Whatever reason they had to begin sewing--the one thing that we can be sure of is that they found that sewing comforted and pleased them.
Many of you have written to me about the solace you are finding by doing piecing versus other kinds of quilt making (such as applique, embroidery, or other techniques).  I concur with you.  Piecing forces me to concentrate on what I'm doing and in doing so, I block the chaos and anxiety of these days.
From 1939, Austin, Texas: 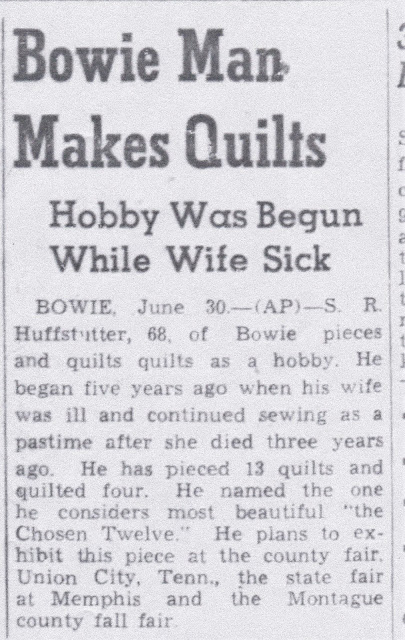 Have a safe and happy day!
Posted by Michele McLaughlin at 5:04 AM

Email ThisBlogThis!Share to TwitterShare to FacebookShare to Pinterest
Labels: Men Who Quilt 7