Last week I got a text with a photograph from a woman in my guild.  She asked about a quilt her cousin in Ohio had received.  No one really knew much about the quilt and she was wondering if I had any insights. 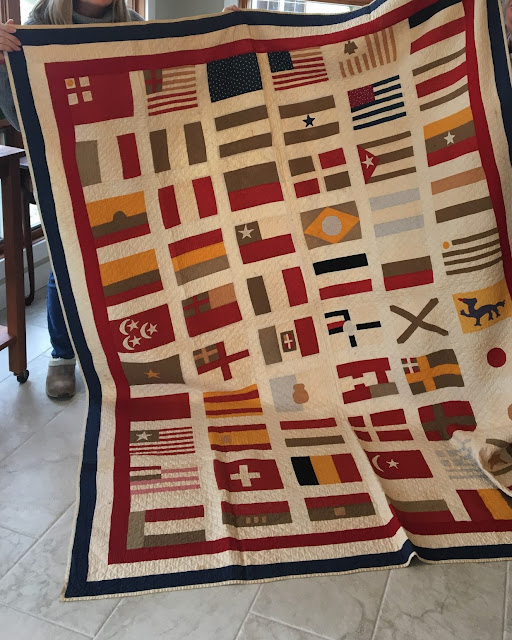 This quilt intrigued me.  From the initial colors, I thought it might be from the 19th century.  Although flag quilts were popular in the early 20th century, most quilters used tobacco flannels.  You can read about them here.

This quilt appeared to be pieced.  I asked for more photographs and began to investigate flags.  I found some good clues and maybe you will too.

It appears to me that much of this quilt has fugitive colors (colors that faded or changed with time--a clue about that is the khaki toned colors in the piece).  One clue: 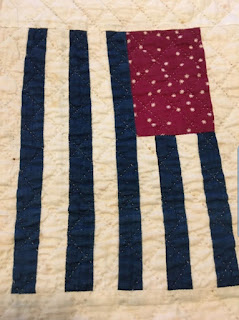 This flag has a claret (burgundy) color, a color that was printed after 1890.
Of course the flags themselves hold keys to the age of the quilt.  This can be tricky.  I never studied flags a great deal but I studied 20th century geography extensively and I know how much boundries changed.  Countries disappeared off the map and the colonization of much of the world makes this task even more challenging.  Additionally, a lot of posters and ephemera featured different kinds of flags, including maritime ones or ones that were used in specific cases.
But when I saw this photo yesterday, I had a better clue.  This photograph shows the quilt upside down but that works.  Top left flag has a red field with a while elephant on it.  Gotcha!  That's the flag of Siam.  Siam became Thailand in 1939. 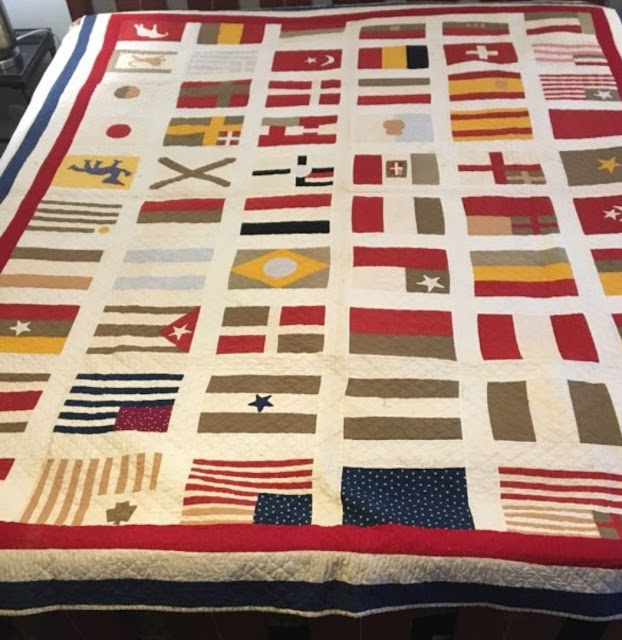 But there are better clues in this piece: 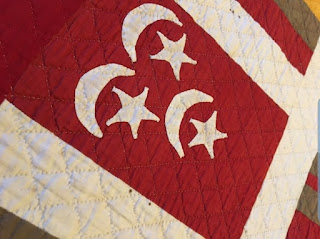 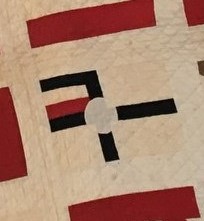 Lastly, there was the dragon flag: 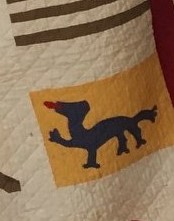 At first I thought this was a celtic country flag like Wales or Scotland.  That red dot at the mouth though...I'm wondering if was the flag of China used between 1890 and 1911.

This image is from a 1905 flag poster.
I could literally lose myself in researching all these flags but I actually have other work to do.  Feel free to research some of these yourself.
So my gut instinct on this one is that it was a unique quilt designed by the maker.  I am speculating but I think the quilt dates from 1900-1920 (although I suspect it is more like 1900-1917--remember the U.S. entered World War I in 1917).
The one thing I am certain is that this quilt should be appraised.  I've never seen anything like it and it is a true slice of history.  Once the pandemic is over, I heartily recommend that the owner find a quilt appraiser near him and have it appraised.
One thing for sure--it's a wonderful quilt!
Have a wonderful day and stay safe!

Posted by Michele McLaughlin at 7:12 AM