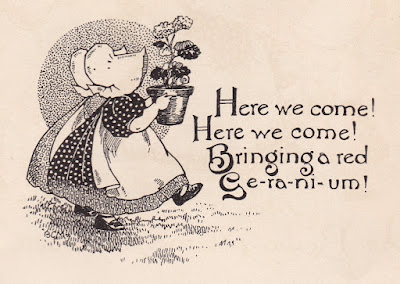 On Monday I asked if there was a quilt pattern you found irresistible or just couldn't stand?

No surprise, many of you don't like the Sunbonnet Sue quilt pattern.  I've heard it from many quilters.  Sunbonnets are the most maligned and yet beloved of all the quilt patterns.

Still, the most popular lecture I offer is called "Project Sunway: The History of the Sunbonnet Quilt Pattern."  I can't retire it because people love this program.  But there is one pattern that I don't like at all--the dreaded Colonial Lady. 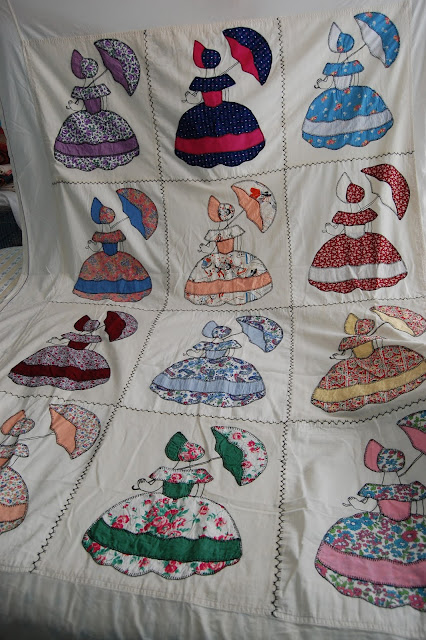 The clothing isn't colonial but 19th century, and worse, the shoulders and necks are always anatomically incorrect.  One of the charms of the sunbonnet quilt pattern is that the quilter doesn't have to worry about some of the most difficult body parts to draw:  the face, the neck, and the shoulders.  Case in point: 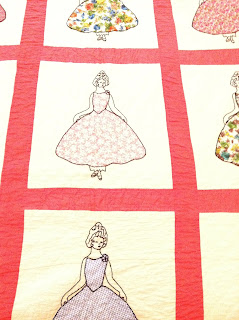 One of the kids said this 1960s quilt looked like it depicted the cartoon character Marge Simpson: 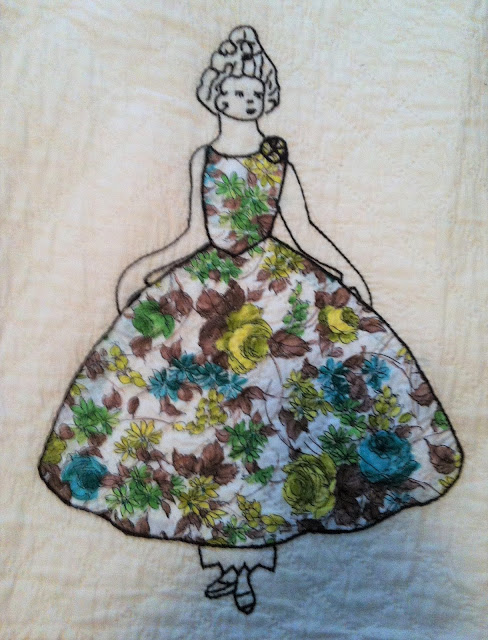 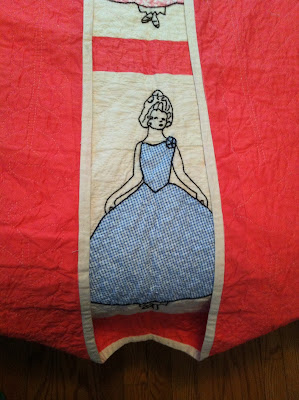 But even she is more anatomically correct than the Colonial Lady!
Usually the arms and hands on Colonial Ladies are pretty dang awful too. 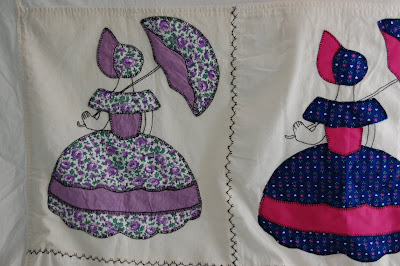 It was the one type of quilt that I refused to purchase for my collection.  So imagine my surprise many years ago when I received a box in the mail with this coverlet in it.  My friend Karen had bought the piece from an online auction and had it shipped to me.  I called her and asked her "what the heck...?"
She laughed and said that the collection could never be complete without this pattern...and she was right.  It also makes my audience feel good that there is a pattern even I can't stand! 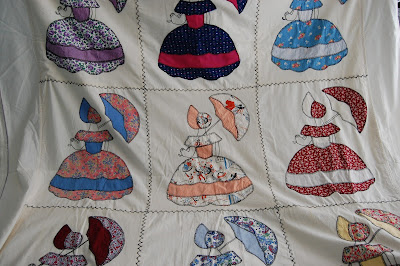 The one thing I do like in this piece are the fabrics used.  I suspect it was made during the late 1950s/early 1960s.
But the story doesn't end here.  Barbara Brackman is well known for her historical contributions to the quilt world and also...her deep and abiding dislike for the sunbonnet pattern.  She was even a contributor to the quilt, "The Sun Sets on Sunbonnet Sue" (see here).
Years ago, I was surprised when I read one of her blog posts and there on photos 7 and 8 were photos of my Colonial Lady quilt.  She must have either owned the quilt at one time (not likely) or saved the photos from the online auction (most likely).  For a hilarious read, check it out here. 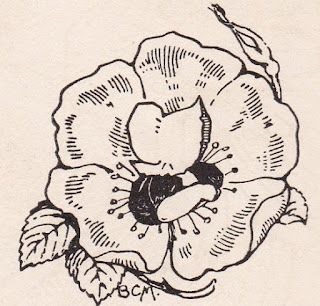 Posted by Michele McLaughlin at 5:03 AM

Email ThisBlogThis!Share to TwitterShare to FacebookShare to Pinterest
Labels: The Wild Colonial Gal