In the early twentieth century, the phrase, "color fast fabrics" was used extensively in marketing clothing and fabric. 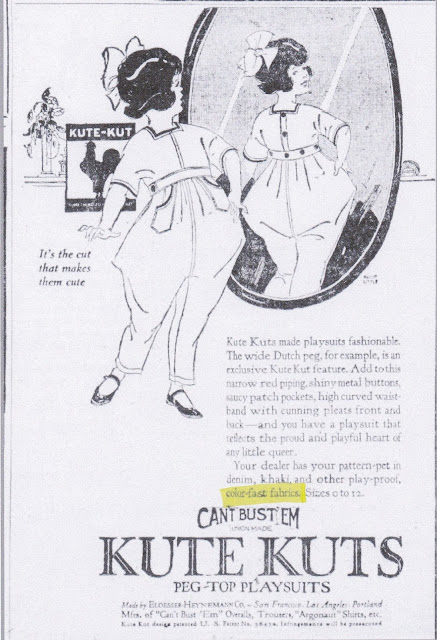 During the early part of the twentieth century, a movement was started to really insure that fabrics would remain color fast.  During  World War I, European dyes were not available due to blockades.  The American Association of Textile Chemists and Colorists was formed in 1921 and is still in existence today.  Their website is fascinating and has a great textile timeline here.

Color-fast fabrics are an interesting topic.  Originally the thought was to inhibit fading of fabrics and a lot of work was done by a UK manufacturer, James Morton.  He literally tested fabrics not only at home but sent fabric swatches to his brother in India to see how they would withstand extreme sunlight.  With the assistance of a chemist named John Christie, he developed "sundour" fabrics that could withstand sunlight.  A great website is here that explains some of his work.

By the 1920s, most ads promoted that fabrics were "color fast": 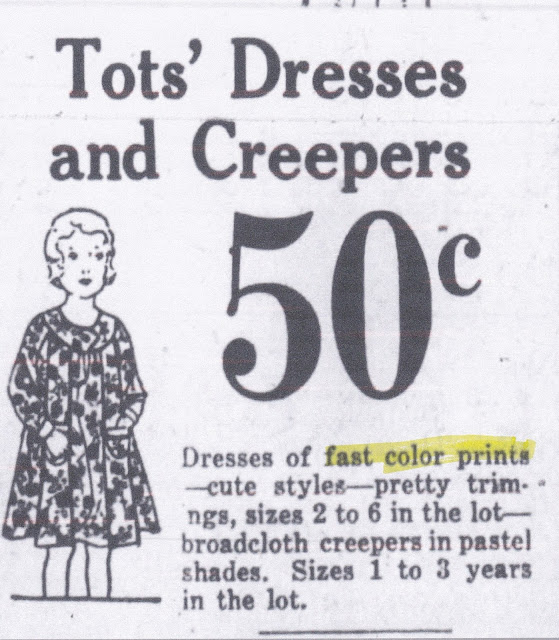 1930 ad
My problem today isn't fading of fabric though.  Despite all the technology that has evolved since then, we can still have problems with our dyed fabric.  Last night I was measuring a quilt for binding when I realized I had pricked my finger and gotten blood on the quilt.  I quickly tried to dab up the blood with cold water when the dreaded bleeding of the red fabric occurred.
I always use Color Catchers and wash all my fabric when I get it.  In this case, the product didn't help and despite using some Dawn to try to eradicate the problem (I had read online that some women used that successfully), I have red bleeding around one block and apparently another looks like it could go as well. 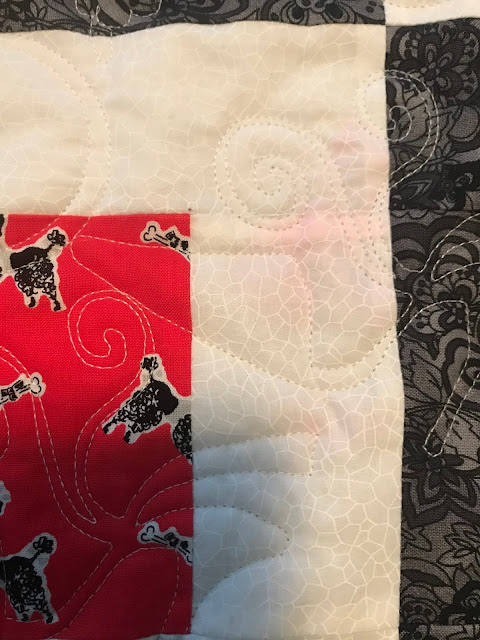 One of my problems is that if one or two bled, the rest are likely to as well: 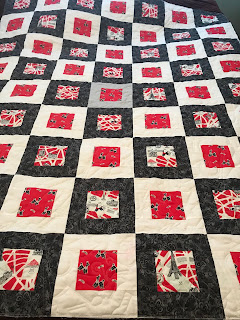 My first recourse is to call Beth today because she used to do conservation and restoration of quilts.
One of my friends had this happen and although she had pre-washed her red fabric, just the humidity of her hands while she appliqued the fabric caused the color to bleed.  She contacted our local fabric store and picked up a product that removed the bleeding.
Should I bind the piece anyway?  Should I wash it again and use another Color Catcher?  I'm in a quandry and any advice would be appreciated!
Thanks and have a great day!

Posted by Michele McLaughlin at 4:15 AM