The best part of my job is visiting guilds and meeting quilters! 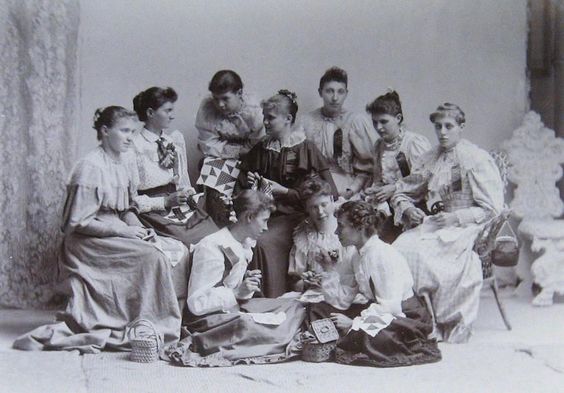 Sewing with friends is fun.
Socializing about sewing is even more fun! 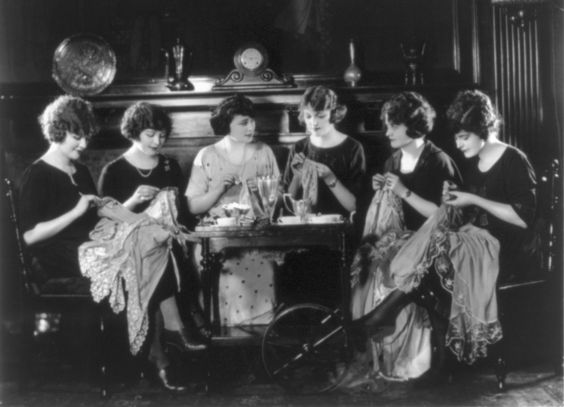 Some of us belong to guilds, others have built an online community through blogs or participate in online forums.  All these friendships have been imperative to us during the pandemic.
We sew but we aren't alone and we love to be chat with folks who share our enthusiasm--in person or virtually.   This week, as part of my tribute to the 30th Anniversary of my own Crazy Quilters Quilt Guild, I thought we could look at women sewing together.
You might be surprised to learn that actual quilt guilds mostly emerged in the 1970s.  My guild was established in 1990.  Until my business took off, I belonged to two guilds; the Colonial Quilters Guild in Bethlehem (city next to mine) which was established in 1983.
Are you a member of a quilt guild?  Do you know when your guild was established?
A "quilting party" was one of the ways women socialized and quilted.  From what I've read, it sounded more of a social event than women just passionate about quilting.  The parties were held infrequently during the early history of our country and concluded with men joining for a party type occasion. There's a fine article about quilting parties at the womenfolk website here.
I didn't find many newspaper articles about quilting parties in the beginning of the 19th century but I did find a few that referenced the parties such as this one from 1826 (which is more about breach of promise than actual quilting): 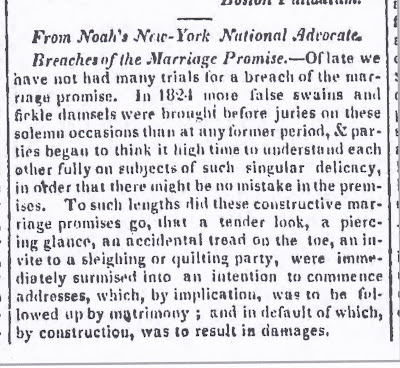 More articles that referred to "old fashioned quilting parties" were published from 1840 on. These articles were more nostalgic than factual and often in the form of fiction.  From 1849: 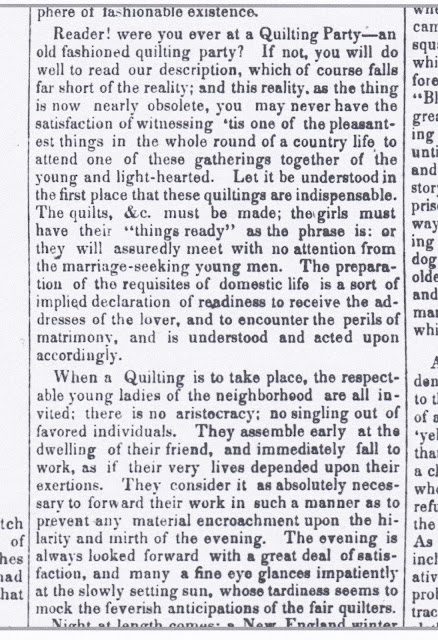 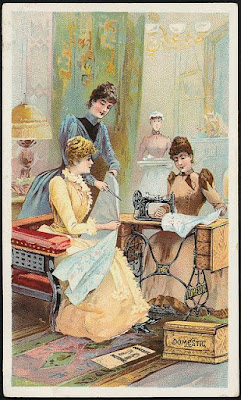 Of course, I'm certain women sewed and quilted together when possible.  It is likely that I couldn't find articles about one or two ladies who visited a friend to help finish a quilt because it wasn't deemed "newsworthy";  later in the 19th century and throughout the first half of the 20th century, I found more articles (in small regional newspapers) that relayed women sewing together this way.  Most of the documentation that would record this activity was likely found in women's diaries.
Tomorrow I'll be writing the importance of early sewing groups that paved the way for quilt guilds.
Have a safe and happy day!
Posted by Michele McLaughlin at 2:34 AM