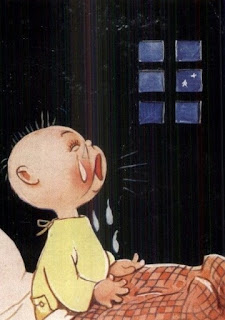 Let me preface this story with a slice of quilt history.  In the 1980s, quilt enthusiasts and scholars began "documenting" old quilts and books were published:  The quilts of various states including Kentucky, Tennessee, or Colorado, etc. were printed with lovely photographs and history so that quilters and scholars could understand patterns and techniques used in those states.  You can read an insightful paper on this here.

But in Pennsylvania we are different.  There's been a number of documentation projects here but the studies are conducted regionally.  We have a lot of quilts and a lot of different populations.  That brings me to one of my favorite Pennsylvania documentation books, Lest I Shall Be Forgotten. 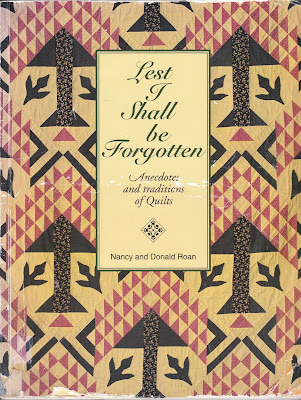 This book features a study of the quilts of the Goschenhoppen people.  These were a sect of Pennsylvania Germans who settled in Montogomery County and included parts of Lehigh, Berks, and Bucks Counties.  The book is packed full of great photos, interviews, and anecdotes.

I love the "Quilts of Childhood" chapter.  One woman interviewed relayed that she was given quilt blocks to embroider "to keep me quiet."  Another page featured redwork quilts.  One of the featured quilts featured redwork blocks embroidered by Albert Stoudt; he was a boy at the time he embroidered the blocks.

It was shared in the book that: "He had to do a quilt block everytime he was naughty.  Hence this is called a discipline quilt."  Apparently, his sister shared the same form of punishment and there is a similar quilt of blocks that she had embroidered.  I can't reprint the photos for you, but if you don't know what redwork is, here's an example, most likely done by a child: 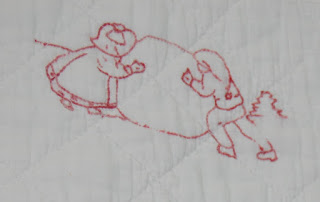 So among the many files I had filed away was a newspaper story published in The Reading Times in 1922.  Reading, Pennsylvania is in Berks county and not far from here.  The story was fictional children's story called "The Patchwork School" written by Mary Wilkins (later Mary Wilkins Freeman). Wilkins was a well known author in the late 19th century and early 20th century.

Punishment consisted of making patchwork every day and started with the child's own patchwork clothing.  After the clothes were sewn, they had to make patchwork coverlets which were given to the city poor.  The children were not allowed to go out to play and

"Every day bales of calico were left at the door of the Pachwork School, and it all had to be cut up in littles bits and sewed together again.  When the children heard the heavy tread of the porters bringing in the bales of new calico, the tears would leave the corners of their eyes and trickle down their poor little cheeks, at the prospect at the additonal work they would have to do.  All the patchwork had to be sewed over and over, and every crooked or too long stitch had to be picked out..."

Sorry, I had to take a break because of course, this makes me burst into laughter thinking of how you or I would face this type of punishment.  It's all about perspective.  A quilter would think that a porter delivering calico was like Christmas.   It reminds me of people asking about our quilting--"so you buy fabric, cut it up, and sew it back together to make a blanket?" 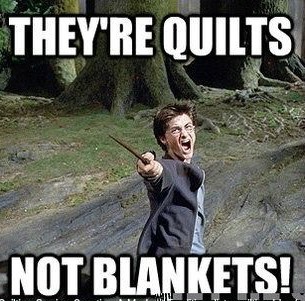 The story was originally published in the early 1880s in a children's magazine called Wide Awake.  You can read the story here.

Apparently this story was not just popular as a reprint in Reading but was often included in nearby children's pageants and shows.

I was curious about the author and her perspective.  Mary Wilkins was an early feminist.  She did not want to become subservient like her mother had been and balked at domestic tasks.  To her, I'm sure that making patchwork was some sort of punishment.  She was a bright young woman and became a published author in her teen years; the money she earned helped to support her family.  You can google her for more insights on her life.

There is actually a school called The Patchwork School in Colorado.  The school specializes in early childhood education and appears to follow a Montessori type methodology.

So discipline quilts...who knew?  What do you think of this form of punishment?