Five months into World War I, Europeans braced themselves as it became  apparent that the war was not going to be a brief one.  The toll on a generation of young men was great; technological warfare was introduced during this war as mustard gas, tanks, and automatic weapons killed and wounded more than Europeans had anticipated.  Christmas of 1914 was a unique moment during the war; a number of unofficial ceasefires occurred and the troops from both sides celebrated the holiday together.  For more insights you can read here. 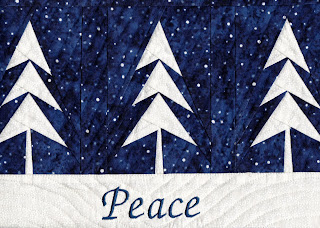 On December 23, via suffragist Emily Hobhouse, this article was published in London: 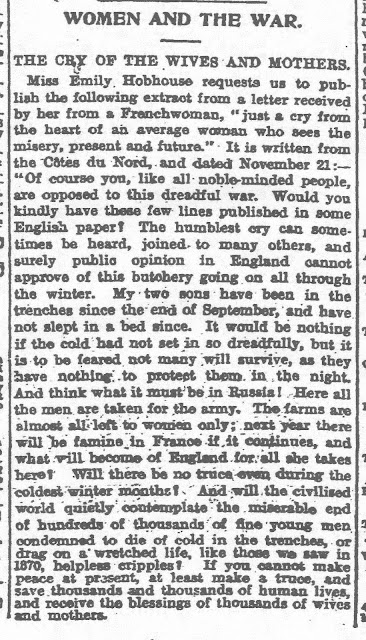 A call for peace also came from some British women.  On December 25, 1914, a public letter  was released by British suffragettes.  Signed by 101 suffragettes, it was addressed to the women of Germany and Austria on the first Christmas holiday during World War 1.

The Open Christmas Letter was initiated by Emily Hobhouse and sent to American suffragist Carrie Chapman Catt (then the President of the International Woman Suffrage Alliance).  It was addressed to German/Austrian suffragists.  Because of the war, the open letter had to be sent via the United States since it was illegal to communicate with the enemy.  The letter was a call to peace and the language appeared to be more of mothers than enemies:

Is it not our mission to preserve life?  Do not humanity and common sense alike prompt us to join hands with the women of neutral countries, and urge our rulers to stay further bloodshed?...Even through the clash of arms, we treasure our poet's vision, and already seem to hear

"A hundred nations swear that there shall be Pity and Peace and Love among the good and free."

May Christmas hasten that day.

Three months later, a response was penned by German/Austrian suffragists who had just received the Open Letter.  They responded in kind and cited that "really civilized women never lose their humanity."

In the U.S., there was a pacifistic tendency particularly among intellectuals.  Among them was Julia Grace Wales, a Canadian born scholar who taught at the University of Wisconsin.  Stories from the front weighed heavily on her as well and in December of 1914, she devised the Continuous Mediation Without Armistice Plan. Later called "The Wisconsin Plan",  the plan sought for the U.S. to bring together intellectuals from all the nations as a way to promote a longstanding peace with a two fold plan:  to provide peace without humiliation to any nation and exclude compromises that could rekindle the war. 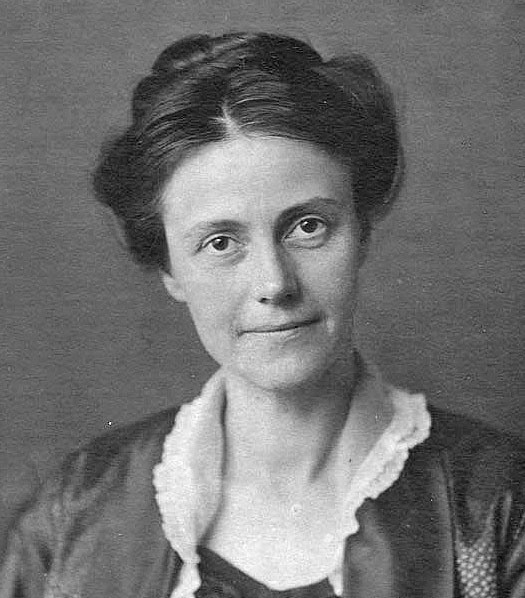 Julia Grace Wales
The plan was adopted by the International Congress of Women and many scholars feel it was the basis of the short lived League of Nations and Wilson's Fourteen Points.

Beth and I wish you a holiday of peace and a new year full of kindness and joy! 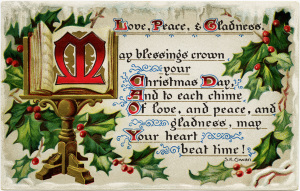 Posted by Michele McLaughlin at 7:56 AM